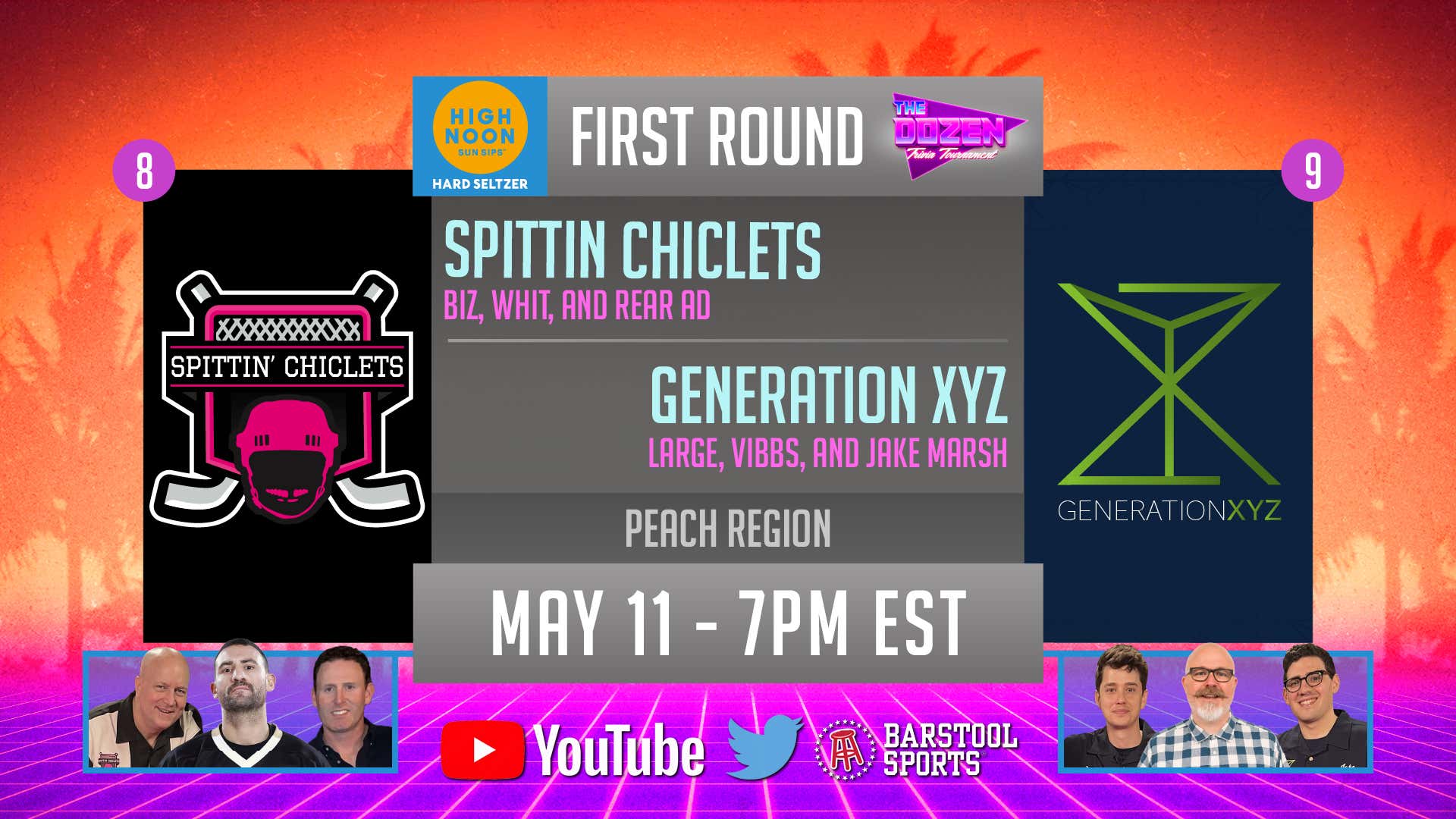 The Tournament is back again tonight with the official start of Round One!

Let's address the first bit of news. Yes, I cleared up the controversy…

Here is what happened:

Basically, I made a note that the list had changed in between matches (a few plays went up and down the NBA and G-League ranks), and was only supposed to count a portion of the list during the match's Bonus Round. Unfortunately, I read from the wrong section, and the question Ziti answered technically included UConn as a correct answer, despite me giving them an incorrect buzz.

I am fairly upset over it, but guess what, fuck my feelings, this is about Trivia. You get an EXTRA match. I blew it, but now you benefit as a fan.

Tonight, at 7|6c on YouTube, Twitter, Facebook, and Barstoolsports.com, The Dozen: Trivia Tournament presented by High Noon resumes with 8-seed Spittin' Chiclets vs. 9-seed Generation XYZ. You can watch on all of those platforms, and if you're watching on YouTube, set a reminder below:

Just a few short weeks ago, 8-seed Spittin Chiclets was well within the Top 5 of the league, but their third match loss to 2-seed Team Minihane sunk them all the way down to their current spot. Their resume is stout, with a win over 5-seed The Experts, and their two losses coming to 2-seed Team Minihane and 3-seed The Yak. Their record may be small, but this team has shown they have an ability to compete. As for 9-seed Gen XYZ, they're strong, but very much carried by Large… 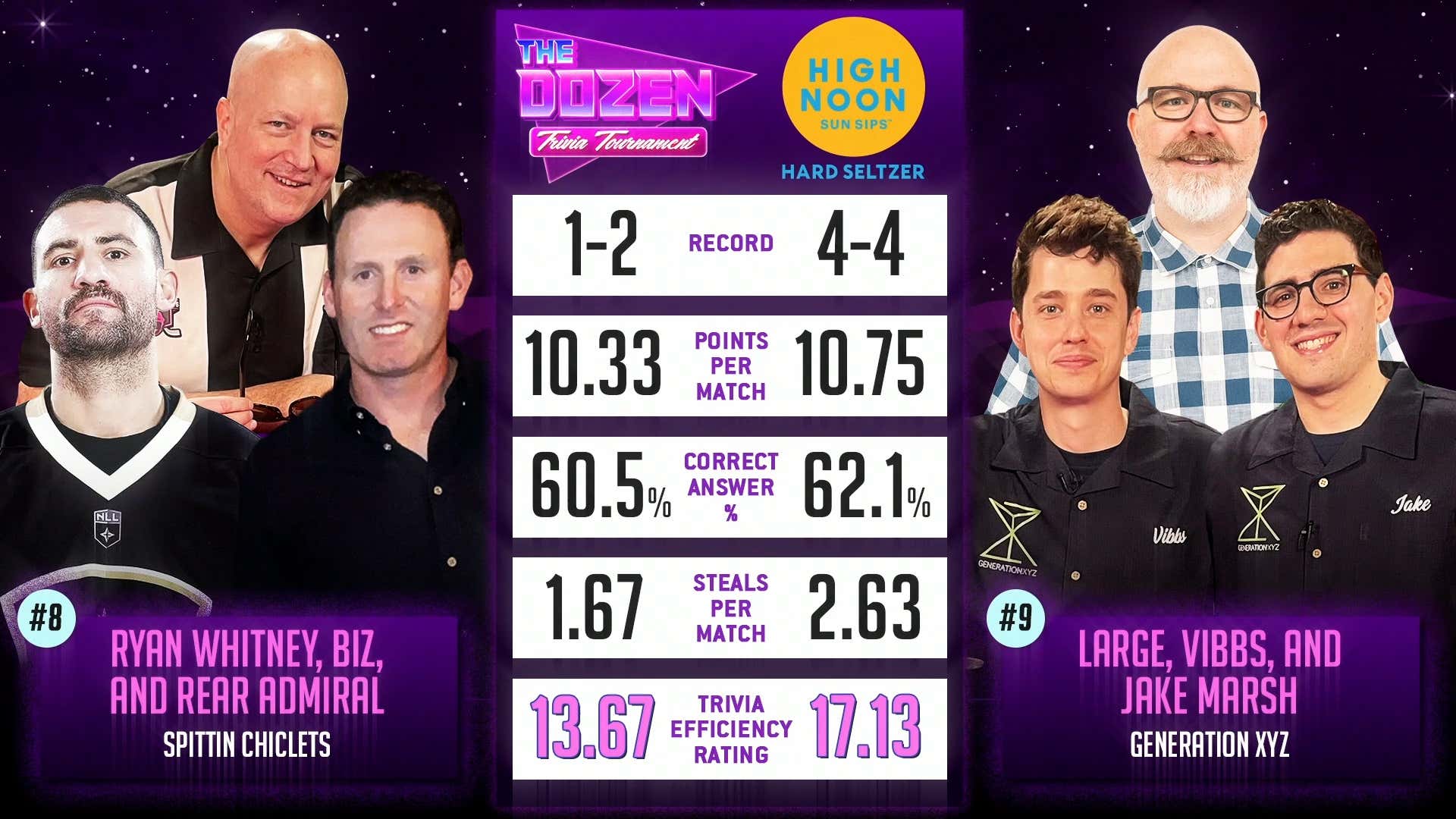 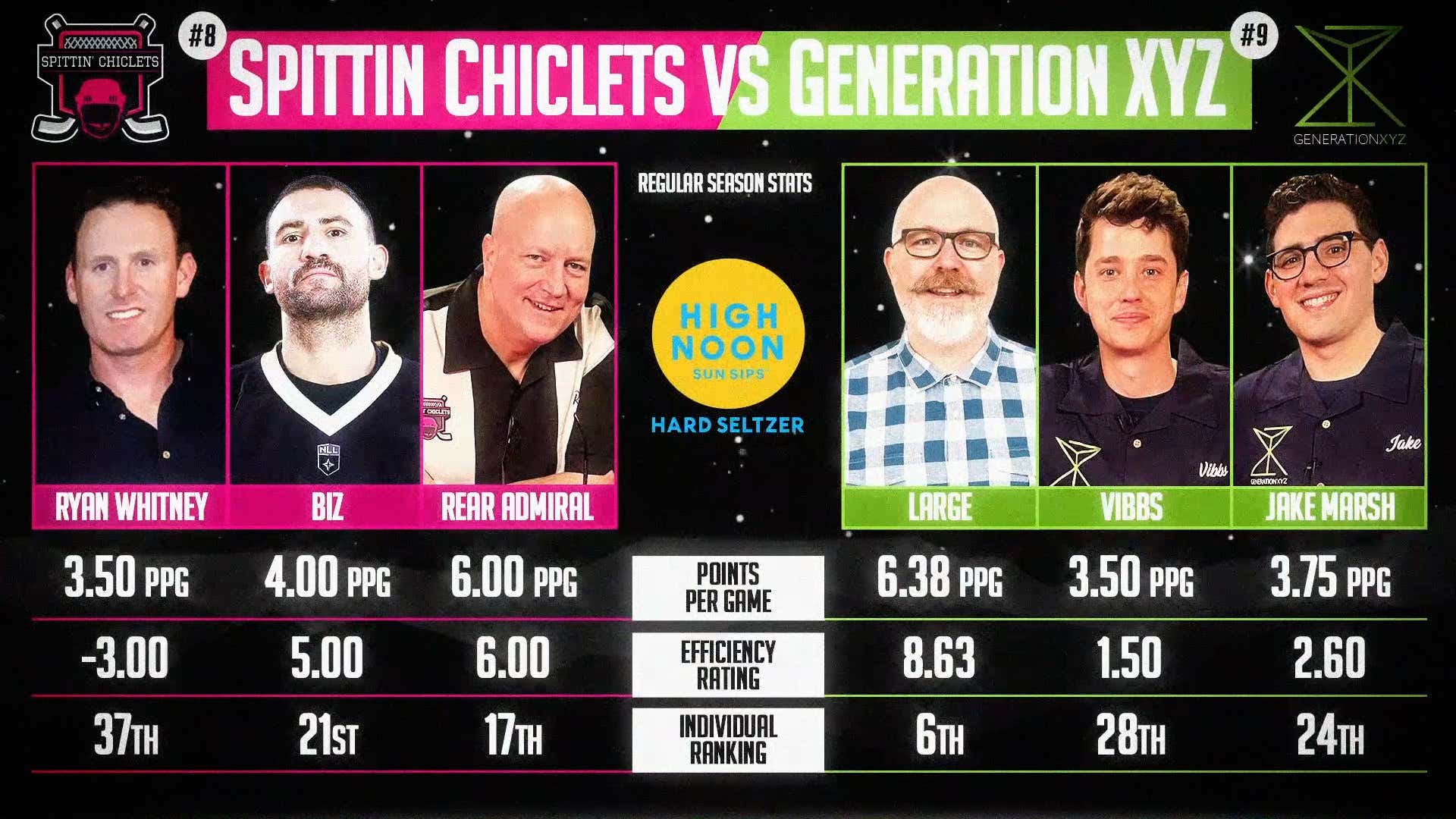 Pre-match, I'd have guessed the favorite tonight, despite being the lower seed, would 9-seed Gen XYZ, but they'll need a massive showing Jake Marsh & Vibbs. The man might be great, but Large simply can't do it all. 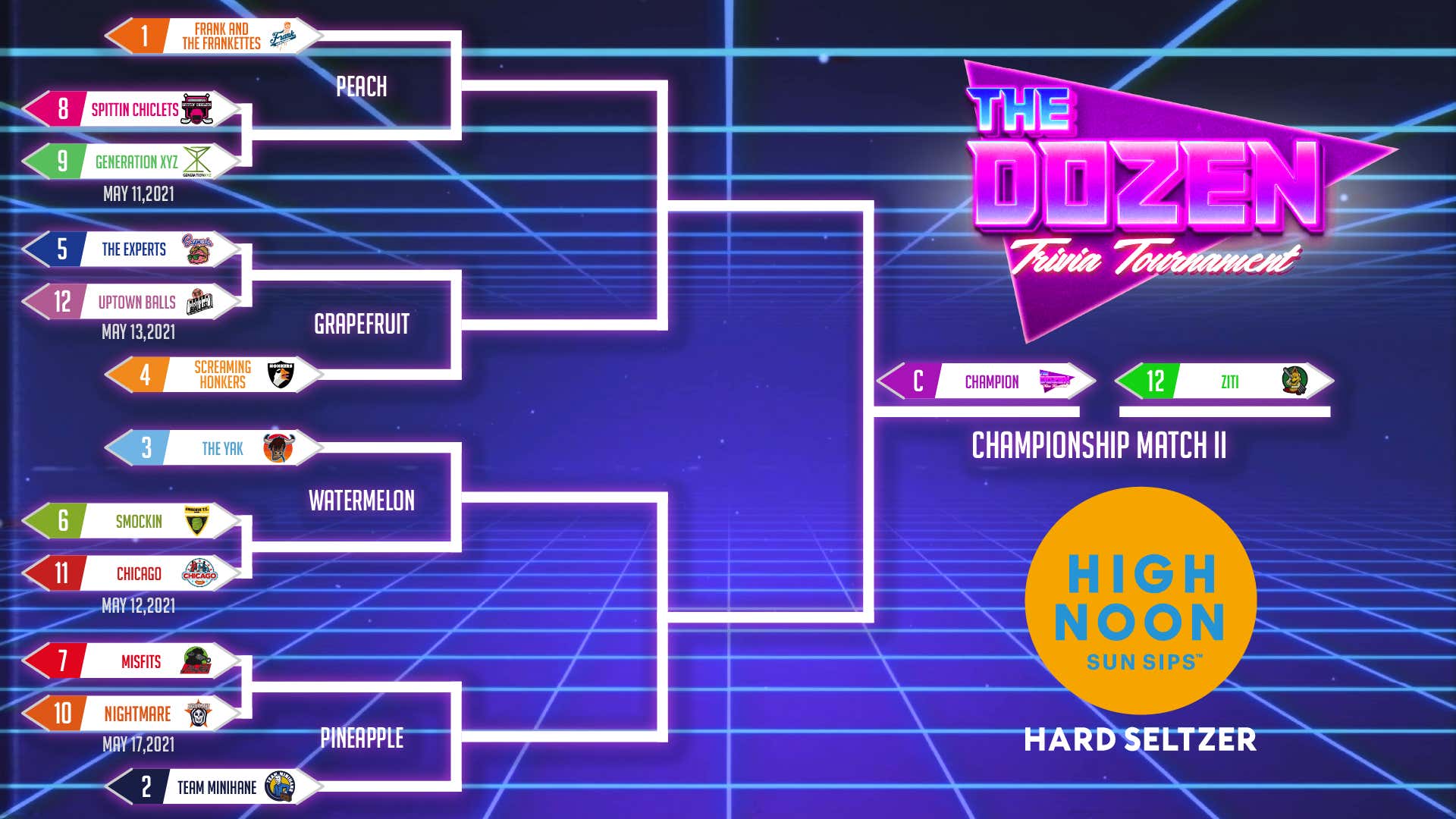 We are in for a fucking battle tonight, and whenever the Chiclets guys play you'll always get plenty of entertaining moments. 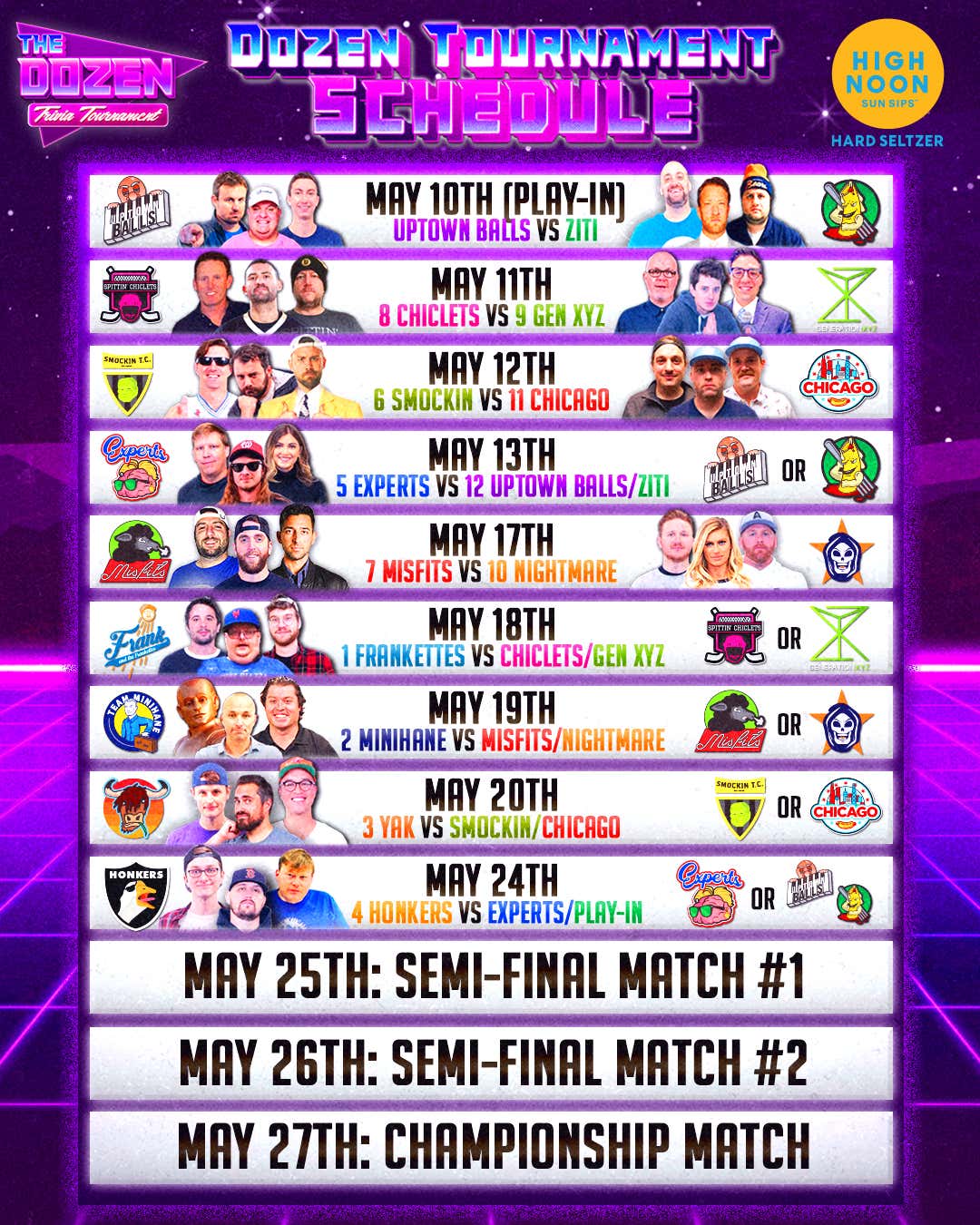