The San Francisco Giants trade Willie Mays to the New York Mets for pitcher Charlie Williams and $50,000. Mays, who turned 41 five days earlier, had been a Giants star since their days in New York in 1951. Mays made his Mets debut three days later, hitting a home run against his former team at the Mets beat the Giants 5-4 at Shea Stadium.

The Say Hey Kid, Willie Mays, is, without question, one of the five greatest players in the history of baseball. Upon his 1951 debut with the New York Giants, Mays defined everything a centerfielder could be, hitting with power and speed while providing the type of defense all team desire to have. In a 22-year career Mays, set a record with 24 All-Star Game appearances, with 3,283 hits, 660 home runs, 1,903 RBI, and .302 lifetime average, in addition to winning a Gold Glove in each of the first 12 seasons it was awarded.

An MVP in 1954 and 1965, Willie Mays was once considered the best bet to challenge Babe Ruth’s home run record despite playing in the Polo Grounds and Candlestick Park, both of which were difficult home run parks. A with any player, the numbers began diminishing late in Willie Mays's career. By the time he was 40, he had begun playing more games at first base as he hit the twilight of his career.

Despite solid numbers in 1971, Mays had only played sparingly in the early part of the 1972 season with the Giants. With owner Horace Stoneham struggling financially, the unthinkable became a reality when he agreed to sell Willie Mays to the New York Mets for $50,000 while also sending minor league pitcher Charlie Williams to San Francisco as part of the deal. The Mets had struck marketing gold, as Mays, despite being a shell of his former self, was still the biggest name in the game. It helped the Mets win over some former Giants fans who had yet to embrace the new club that began play in 1962, five years after the Giants left for San Francisco.

Willie Mays would make his Mets debut four days later, as they hosted his former team at Shea Stadium. Playing first base, Mays batted leadoff for the Mets, who entered the game in first place with a record of 15-7 under first-year manager Yogi Berra. The Giants, meanwhile, were toiling in last place under Charlie Fox at 9-18 a year after winning the NL West. Arriving on the field in a cable car with 35,505 on hand, Mays led off the game with a walk. Sam McDowell, the Giants starter, would issue walks to the first three batters before Rusty Straub strode to the plate and hit a grand slam. McDowell would settle down and would strike out Mays in his second at-bat to end the second inning. Meanwhile, the Giants rallied in the fifth off Mets starter Ray Sadecki, as a leadoff walk to Fran Healy led to a four-run rally as Bernie Williams followed with a triple, Chris Speier hit a double and Tito Fuentes hit a two-run home run to tie the game. With reliever Don Carrithers on the mound to start the fifth, Willie Mays came up for the third time and hit his first home run of the season to give the Mets a 5-4 lead. That run was enough as Jim McAndrew shutdown San Francisco over the last four innings to earn the save. Mays would make a fourth plate appearance in the seventh, drawing a one-out walk before he was thrown out at second base by Fran Healy while trying to steal.

In two seasons with the Mets, Willie Mays hit .238 with 96 hits, 14 home runs, and 44 RBI. He only stole two bases and scored 51 runs. His final hit would come in the 1973 World Series as the Mets lost a seven-game heartbreaker to the Oakland Athletics. 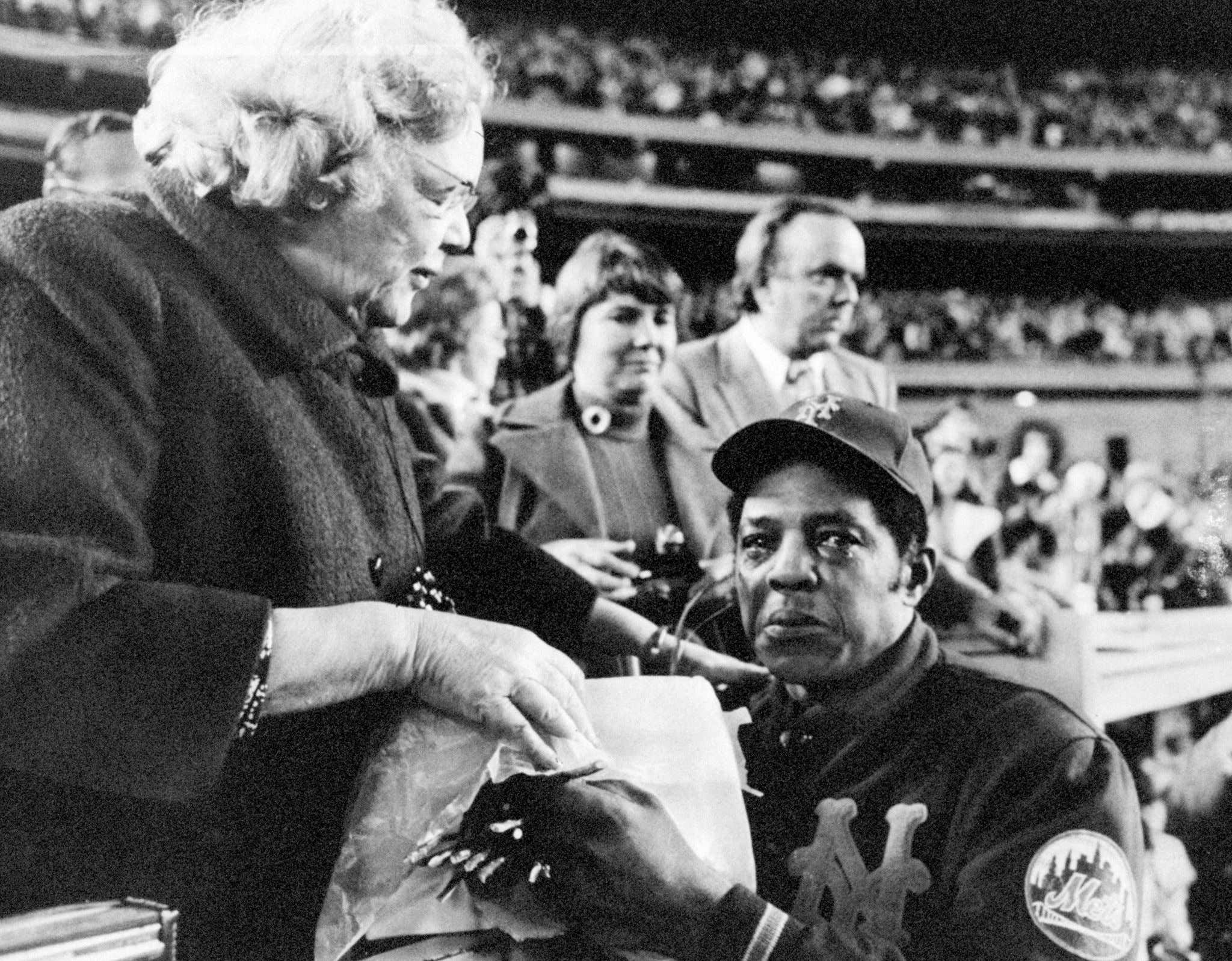 After retiring, Willie Mays became the New York Mets hitting instructor. He had been a personal favorite of Owner Joan Payson, who had been a Giants fan and owned shares in the team before their move to San Francisco. Payson had promised Mays that no Met would ever wear #24 again, though it was never officially retired. After being elected to the Hall of Fame in his first year of eligibility in 1979.

When his off-season work doing commercials for a casino rose the ire of Commissioner Bowie Kuhn, Mays left the Mets as new owners took over. Since that time, Willie Mays has only made a sporadic appearance at Mets events, as they have yet to put him in the team’s Hall of Fame, nor have they retired his number. However, #24 has only been issued in the rarest of circumstances, first to Kelvin Torve by accident in 1990. The next player to wear #24 was another Hall of Famer, as Rickey Henderson wore in when he played with the Mets in 1999 and 2000. As well as his brief coaching tenure in 2007. The number remained in mothballs until this season, when Robinson Cano, another possible future Hall of Fame, was allowed to use it.