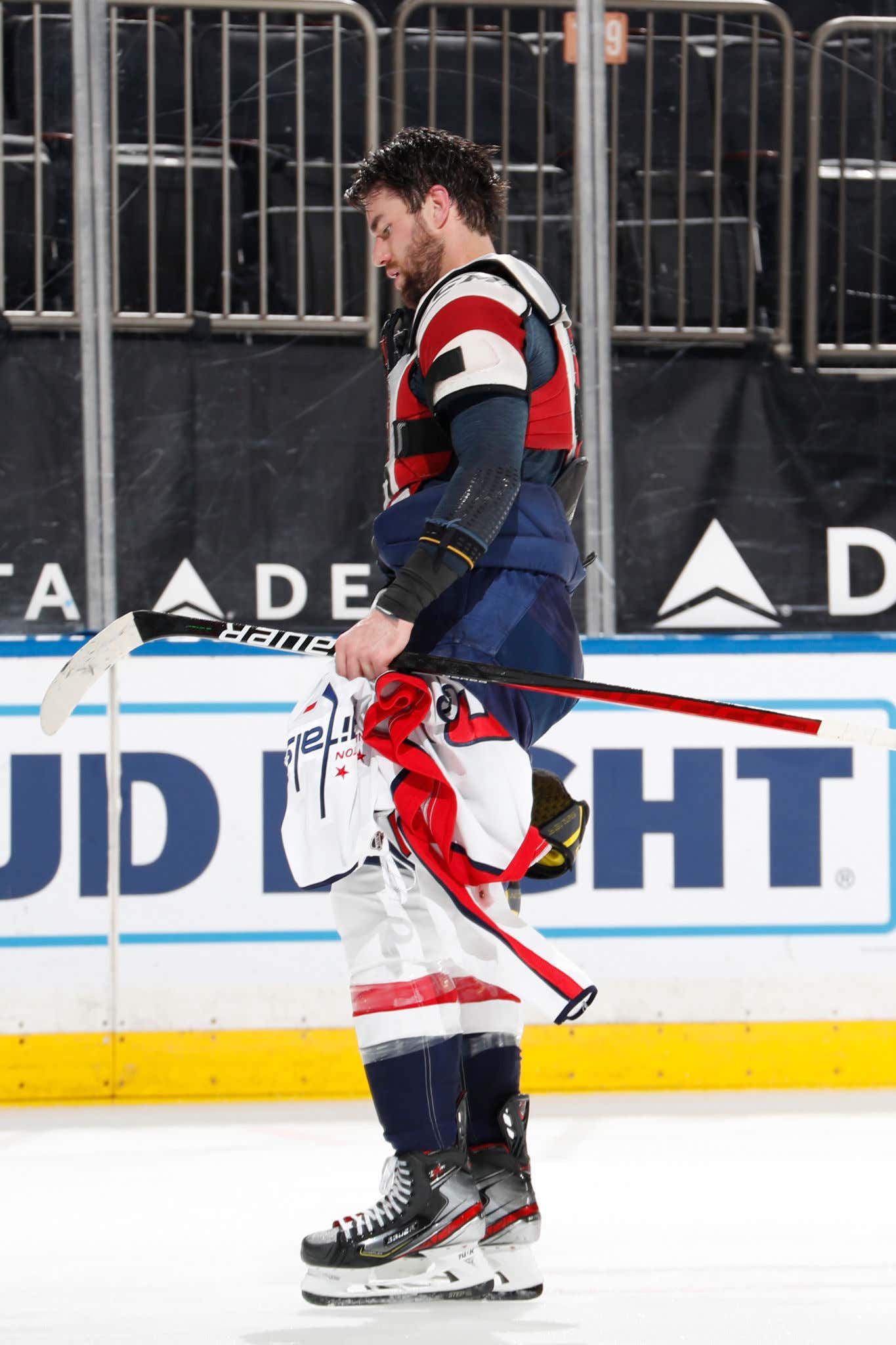 If you've got even the slightest interest in hockey, you've heard/read/seen Tom Wilson did Tom Wilson things yet again last night against the NY Rangers. I've always said guys like Wilson are worth their weight in gold, especially in today's softer version of the game. A player who toes the intimidation line with talent is increasingly rare. But his latest antics are, without question, the exact opposite of a tough guy move. It wasn't toeing the line. It's simply being a chicken shit animal. That was pretty obvious to a majority of the hockey world but no one could've expected the NHL DoPS to bring down the hammer on Wilson like they did:

Washington’s Tom Wilson has been fined $5,000, the maximum allowable under the CBA, for Roughing NY Rangers’ Pavel Buchnevich.

Yep. That's it. The sport's department of PLAYER SAFETY decided that the five-times-suspended Tom Wilson needed to be sent a crystal clear message. That message is hey, we saw how blatantly careless your back-of-the-head cheap shot was to a defenseless player with his face on the ice. We know your reputation & history. We're aware you're solely responsible for the powder keg that went off immediately after your unsurprisingly reckless behavior…and we're cool with it. Have fun playing Wednesday night and don't forget to Venmo us that minute thirty of game salary. TTYL.

Face down. Motionless. Stick in his throat.

Let's smash him in the back of the head because I'm so tough. Fuck this guy. https://t.co/WDEAYMW9xR

I actually get it though. Do I agree with it? Of course not. But I get it. When you break it down without assuming intent you can simply say "Hey, Buchnevich went hard into the crease & got caught in an awkward position on the way down. It's not uncommon for opponents to give that guy a shot to let them know they're not welcome in that blue paint." However, when your sole purpose is player safety, all you've gotta do is use your eyeballs and brain to realize this is a guy with a history of line-crossing who saw an opportunity to be a scumbag without a hint of consequence. And maybe that specific action didn't truly threaten the safety of Buchnevich - although I'd be hard-pressed to think of a more dangerous time to throw your body weight and a right hand at someone - but because of it, player safety ended up truly at risk immediately after.

Panarin goes down once, punch, punch. Wilson picks him off the ice to throw him down again… I don't see that being normal from DOPS perspective. Once a guy is down he's down. https://t.co/RTdVeEkuce pic.twitter.com/8gyOeeAeRi

Every Tom Wilson defender says the same thing. "Panarin jumped him." Again - I get it. Technically, you're correct. In an isolated bubble that's exactly what happened. Artemiy Panarin jumped on Wilson's back like a backpack and Wilson has every right to defend himself. Also, he shouldn't be penalized for simply being bigger and stronger. I'd just ask you to use your eyeballs and brain one more time though. To no one's surprise, 6'4 220-lb. Wilson quickly flipped the script on a player he's got 6 inches and 50 pounds on. He was in the driver's seat. You wanna punch Panarin? Fine. He's got his hands on you & that's within the boundaries of hockey. Instead, Wilson takes an off-balance player who's already lost his helmet & whips him head-first to the ice thanks to a slew-foot/hair-pull combo. Listen the "arrest him" narrative is laughable - but it's a fucking miracle Panarin's skull wasn't caved in off the ice. He still ended up injured and done for the remainder of the year. THIS is the stuff you'd think the Department of Player Safety would have zero tolerance for. It's not within the bounds of the game at all.

And here's the thing. These teams play again tomorrow. The Rangers are a young squad and don't have anyone that can come close to matching Tom Wilson's level of brutality. So how do they respond? Do they just play out an end-of-the-season game with a skeleton crew without any sort of retribution? Let Wilson sucker-punch one teammate, rag doll their superstar then flex in their faces go ignored? Maybe. But what if that's not an option for someone on this roster? They know they can't chuck knucks with him so instead a Ranger does something stupid - whether it's on Wilson or one of their stars. 95% of the NHL can't match his size and strength while the other 5% are a coin flip. That should absolutely be his advantage. Letting him (or any player) get away with non-hockey-related shit like this though puts the onus on players to police it themselves…and the only way they're able to do so against a monster is how?

Jeopardizing player safety. You don't have to be big & strong to do that.

Doesn't make it right, but doesn't make it any less of a potential reality either. So if Tom Wilson or any of his teammates end up with a Bauer mustache from the scummiest cross-check you can imagine, the cowardly DoPS can thank themselves for allowing the opportunity for this to escalate instead of having a backbone and actually prioritizing player fucking safety.