Action picks up around the 1 minute mark

Just like that, my interest of ever becoming an armored truck guard went from 0% to -1000000000%. Not that my application would be used for anything but kindling in a fire because I am a total coward, which I feel is one of those things that comes through even on paper or electronic mail (email to the common folk) considering this is what I looked like the entire time watching that video. 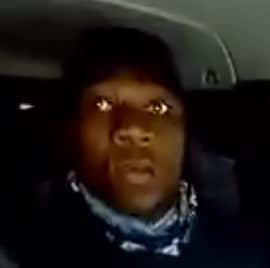 I always joke about how I dream of taking a Brinks truck any time I see it parked at a mall or in town because striking it rich without any real work outside of shedding a few GTA Wanted Stars is the American Dream. But I say that when I see what appears to be an unattended truck that by the grace of God may have had the doors unlocked, the trunk full of cash, and the engine running with a full tank of gas.

Even then, I would pussy out because I am the polar opposite of the driver of that car, who is a verified bad ass and should be the king of glasses wearers around the world. Dude treats getting shot at, sideswiped by a pickup truck, and going off road like I treat trying to avoid a pothole. It takes a certain type of badass to almost forget taking your fucking rifle as you leaving the shot up armored car you are riding in to greet any remaining robbers that attempted to turn you into Swiss cheese for paper that belongs to someone else.

Jason Bourne? Ha! That's just Matt Damon with a Hollywood budget and a stuntman. This driver is out playing real life hero ball in a shitty Toyota and calmly pointing out shooters while his wingman had trouble using a cellphone then apparently scared off the remaining robbers when he left the car strapped with a rifle. What an absolute legend.