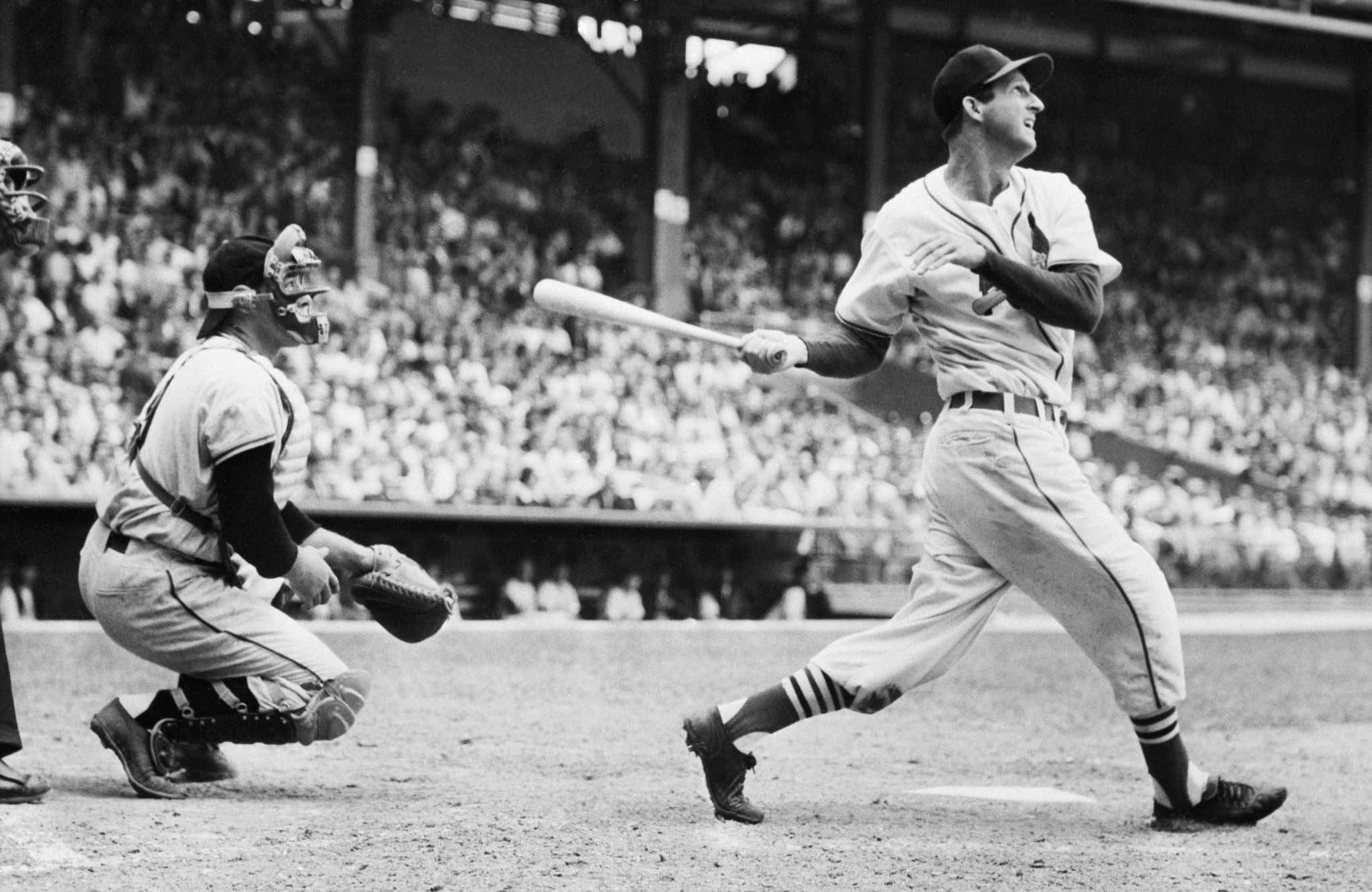 Stan Musial of the St. Louis Cardinals has a big day as he hits five home runs in a doubleheader against the New York Giants at the Busch Stadium. The Cardinals and Giants split the twin bill, as the Cardinals win the opener 10-6, with Musial hitting three home runs with six RBI. The Giants won the nightcap 9-7, with Stan Musial having two homers with three RBI. The five home runs in a doubleheader would be equaled by Nate Colbert of the San Diego Padres in 1972.

Born on November 21, 1920, in Donora, Pennsylvania, Stan Musial became a star right away when he joined the St. Louis Cardinals at the end of the 1941 season. Musial helped lead the Cardinals to National League Pennants in his first three full seasons as the Cardinals won the World Series in 1942 and 1944. Musial won the first of three MVP awards in 1943, leading the league in hitting a .357. After spending the 1945 season in the military, Musial won a second MVP award, leading the Cardinals to another World Championship. Stan Musial would add a third MVP award in 1948 as he had a career-high .376 average and 131 RBI.

Throughout his 22-year career, Stan Musial was one of the most respected players in baseball. Fans in Brooklyn bestowed his famous nickname upon him, “Stan the Man,” saying “Here Comes that Man” every time he came to the plate against the Dodgers at Ebbets Field. Musial was one of the best hitters of his generation, winning seven batting titles and posting a career average of .331.

The Cardinals entered the Sunday doubleheader with a record of 9-6 for manager Eddie Stanky while the Giants were 8-7 for Leo Durocher. Johnny Antonelli was the starting pitcher for New York, while Gerry Staley started for St. Louis. Stan Musial walked in his first at-bat as the Cardinals scored two runs in the first inning, as Wally Moon led off with a home run. Musial hit his first dinger in the third inning, stretching the Cardinals' lead to 3-0. The Giants rallied to tie the game in the fourth. Tom Alston hit an inside the park home run to put the Cardinals back in front. However, Whitey Lockman and Wes Westrum went back-to-back to give the Giants a 5-4 lead in the fifth. The Cardinals regained the lead quickly as Stan Musial had a two-run homer to chase Antonelli. Monte Irvin tied the game in the sixth as the game went back and forth. The game remained tied until the eighth when Musial hit a three-run blast off Jim Hearn. The Cardinals added one more run and won 10-6 as Al Brazle got the win.

In the second game, the Giants started Don Liddle, while the Cardinals started Joe Presko. Tom Alston had a three-run double to give the Cardinals an early 3-0 lead. The Giants exploded for eight runs in the fourth inning with a three-run home run Bobby Hofman. The Cardinals got three runs back in the fifth as Stan Musial hit a two-run shot, with Ray Jablonski going back-to-back. Musial homered again in the seventh to make it a one-run game. That would be as close as the game got as Musial popped up in the ninth as the Giants added a run and won 9-7.

In all, Stan Musial was 6-for-8 with six runs scored, nine RBI, and 22 total bases in the two games. The five home runs in a doubleheader would be duplicated by Nate Colbert of the San Diego Padres on August 1, 1972, against the Atlanta Braves.