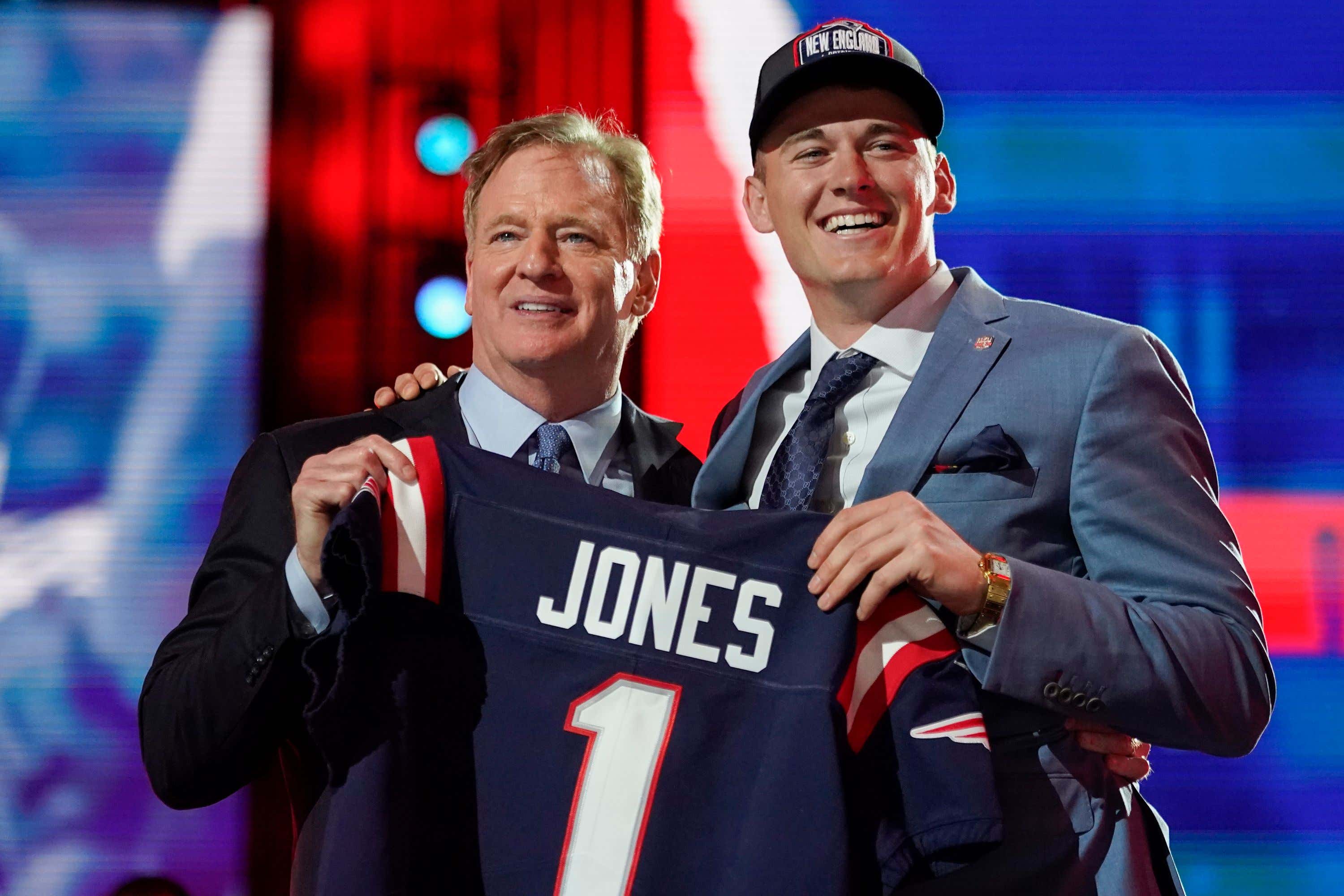 Here's my initial reaction from last night to the news the Patriots had landed their next franchise quarterback. At least it's what I could get my palsy, shaking fingers to type once I stopped running around Stately Thornton Manor screaming while my bewitching Irish Rose asked me 12 times who Mac Jones is and why this is a big deal. Anyway, here's what I think by the light of day after a night of staring at the ceiling and basking in the warm afterglow of getting everything I wanted out of Round 1 of the draft:

--In "The Hunt for Red October," the Scott Glenn character, who captains the USS Dallas, finds himself playing a dangerous game of cat-and-mouse with a Soviet commander he doesn't yet fully understand. And he says, "The hardest part about playing Chicken is knowing when to flinch." That was Bill Belichick last night. In fact, it's been him all offseason. There hasn't been a single available quarterback - free agent, potential trade target, or top draft prospect - that the Patriots haven't reach out to, inquired about, or personally scouted. Maybe with the exception of Trevor Lawrence, for the obvious reason. As he was doing this, he was getting hammered relentlessly by the socially isolated, perpetually outraged imbeciles on Boston sports radio for his whole approach. He wants to prove he can win without a quarterback. He's not being aggressive enough. Mr.Kraft is taking his power away. He's mentally checked out. He's … (wait for it) … arrogant. So what happens? He kept his options open. He read the board. He stayed patient and, as he's always stressed, he let the draft board come to him. Getting the QB1 he (and I) wanted without having to make an expensive move up.

--In short, he never flinched. All the US Navy got out of winning their game of Chicken was a highly classified, state of the art Soviet nuclear ballistic missile submarine with a cutting edge silent propulsion system. For New England, getting Jones without having to give up future 1st round picks the way San Francisco and Chicago did to get their QBs is like getting a top secret sub and it's crewed by dozens of those Hot Russian Women who are always dying to meet me in my pop up ads.

--Does this at all strike you as a bunch of people who are panicky or arrogant?

This is arguably the most important single draft pick they've made in 21 years. And they talk about it with all the urgency of the hotel desk clerk saying they can arrange an Uber to pick you up at the rental car return lot. Plus, Belichick going around the room to get everyone's stamp of approval is the first example of what RKK talked about a few weeks back about a more "collaborative" approach. Whoever was anonymously leaking out that revisionist stuff about how they advised against N'Keal Harry and got overruled by GM Bill can cram it if Jones has struggles.

--Because I'm an Old, bringing up history is sort of my thing. And so I couldn't help feeling like I did in 2004. The Pats were sitting at 21. They needed someone to replace Ted "Mount" Washington in the middle of the defense, but unfortunately for them, the best pure nose tackle in the draft, Vince Wilfork, was a mortal lock for the top 10. Maybe even as high as No. 6. But once he dropped into the teens and you looked at the teams drafting ahead of them, and none were looking at D-line, it became more and more likely he'd free fall all the way to them without a trade up. And that's what happened. So they ended up with a 10-year starter, perennial Pro Bowler and a guy who started and ended his Pats career by winning a ring. Once Justin Fields and Jones both made it past, say, the Panthers and Broncos at Nos. 8 and 9, with no one but teams all set at the position like the Cowboys, Chargers and Vikings standing in their way, you knew the only thing that could burn them was getting leap frogged. The Bears moved in to get Fields. And after a brief moment of panic when Minnesota traded out of 14, it was just a matter of seeing the Jets move into that spot. God bless them. And I knew the Pats had their man. God bless them too, for getting their pick in faster than any other selection of the night, just to end the agony. Everything had gone exactly according to plan.

--To be clear, I would've been happy with Fields as well. And it would've been fascinating to see what GM Bill would've done if both he and Jones were still on the board. If I have a preference for Jones, it's only because I think he's more NFL-ready right at this moment. Someone they can plug and play as a rookie and he can make them a contender. It's fair to say Fields has a higher ceiling. And I saw one report where a couple of teams who tested him for his cognitive abilities said his results were "excellent" and that he tested "off the charts." His game needs refinement, but he should be great, and soon. But between the Belichick-Saban connection and his 4,500 yard, 41 TD, 4 INT, 77% completion rate, his 36/45 for 464 yards and 5 TDs against Ohio State in the title game, and his analytics grades:

… I just preferred Jones as the guy who can step in now. With a less steep learning curve. And make sure the humiliation of 7-9 and the abomination of a 15th pick doesn't happen again. And do not underestimate the value of Charlie Weis, the Godfather of the Patriots Scheme, saying of Mac Jones, "What are the two most important components of a star quarterback? They have the 'it' factor. And they're accurate. That's who he was."

--On that note, this is how an old pre-draft memo from Belichick and Saban's Cleveland days outlined their priorities at the quarterback spot:

I concede that the position has evolved some and having athletic ability helps. But I remind you that some of the most mobile quarterbacks of their generation, like Deshaun Watson, Russell Wilson and Aaron Rodgers, have been among the league leaders in sacks. And that a QB who's about two years from getting a cane with tennis balls on the bottom free with his AARP card, just won the Super Bowl. And there's not a word in this memo about how your quarterback can't have a body like Seth Rogan.

--While I've been all about Mac Jones as a draft option, I should address the fact I've been banging the war drums nonstop for Jimmy Garoppolo. I stand by every word of it. Because the draft is such an inexact science. There was no way to be sure it would play out the way it did, If I'd known we'd be treated to Jones running through the crowd of picks 1-14 and finding GM Bill's waiting arms at 15 like the last scene of a Julia Roberts romcom, I'd have never bothered with the Jimmy G speculation. Now I no longer have to burn the mental calories on that. It would've been a great option. But not as good as how things worked out.

--If anything, the Niners completely overplayed their hand on the whole thing, demanding a 1st rounder for a player who's fallen out of favor and who they themselves made expendable was a gross miscalculation. Now they're stuck. They've got a guy they have no confidence in playing as a lame duck for $25 million and a rookie they have to get on the field ASAP to justify overpaying in draft capital in order to get him. Meanwhile the Pats have their QB on a 4-year, $16 million deal and all their draft board for the foreseeable future completely intact. (Until Ginger Satan robs them of another pick.)

--Belichick spoke to the media and said "Cam's our quarterback." Which was nice. And professional. And the responsible thing to do. And also, not the case. At least it won't be for long. Camp is going to be fascinating to watch. And both Newton and Jones will be giving all the chances to compete. But Josh McDaniels is still going to be running the Erhardt-Perkins system Charlie Weis installed in 2000. And Jones is simply more suited to it. And they can't exactly run two different schemes the way Coach Taylor did that one time, switching out Matt Sarazen for JD McCoy from one possession to the next. Because that was a disaster worse than his walking in on Matt and his daughter doing it a season later. By the time the preseason games start, they're going to have to commit to one or the other. And, it being a cold, cruel world, Newton's contract makes him releasable.

--And yet, there's this weirdness:

--Also, once practices begin, Jones ought to expect more of this. Except he played for Saban, so I'm sure he's no stranger to it.

--Actually, this is really uncanny:

--There was a "Parks & Rec" once where my spirit animal Ron Swanson made it abundantly clear he did not want a surprise party for his birthday, which was Leslie Knope's deranged obsession. He walked around the whole day in semi-terror, looking behind doors and bracing himself for a group of people jumping out to surprise him. Finally at the end of the day, she did surprise him. With an empty room, a steak, a cigar, a bottle of good scotch and the DVD of "Bridge on the River Kwai." Which was the perfect gift for him. That's exactly how last night went for me.

--Finally, while I'm talking about perfect gifts, order yours before they sell out. Mine is already on its way.