I love a good road trip. Unless it's in the Barstool company Avalanche with 6 other guys tearing ass the entire trip like we did on the blackout tour for four years, to me there's no better way to get acquainted with who and what this country is really about. Driving through the farmlands, the countrysides, and small towns. Our country's major cities are awesome no doubt, but they're not the fabric comprised of the people that hold this country together.

I used to have an awesome app on my phone from Food Network that listed all of Guy's destinations he visited on Diners Drive-Ins and Dives that I would use religiously back when I lived the tour life for 5 years. I'd hit as many of the spots as I could. (Really wish I blogged back then because it would have been content gold). Some of the best mom-and-pop hot dog stands, diners, and authentic regional spots imaginable.

For some reason, they discontinued the app so I've been relying on social media recommendations and they actually haven't disappointed.

I put out the Bat Signal the other night on the twitter for food recommendations on a road trip from Chicago to Philly. Our beagle (#lolatheweatherbeagle, ever heard of her?) had to have a special procedure done on her spine that only two vets in the country do and she couldn't fly, so to interstate 76 we went.

I got some amazing recommendations from people. Most notably for me to make some small detours to hit some classic Ohio Valley style pizza joints. I had DiCarlo's for the first time a couple summers ago at the assistance of Jon Greenberg and could not have been more impressed.

I was so confused when they served this thing to me. The cheese seemed half melted. But turned out that's the point. The mozzarella is half baked along with the pizza and then after taking it out they top it with the other half. You're supposed to eat it right away to get the different flavor profiles of the melted mozzarella vs. the cold mozzarella. I know it sounds weird but you can't knock it until you try it. (People that hate on food they've never had, or music they've listened to, etc. etc. are the worst. Don't be that person). Had never heard of "Ohio Valley Style" pizza before Jon mentioned it to me. Put it on my list, made the trek to try it, and was pleasantly surprised.

So when a guy on the twitter told me I had to try "Altoona Style" pizza on this trip through central Pennsylvania, my interest was piqued. Had no idea where Altoona was off the top of my head, or what made their pizza stand out, but boy was I in for a surprise.

Turns out it's a nice little town situated between Pittsburgh and Harrisburg. 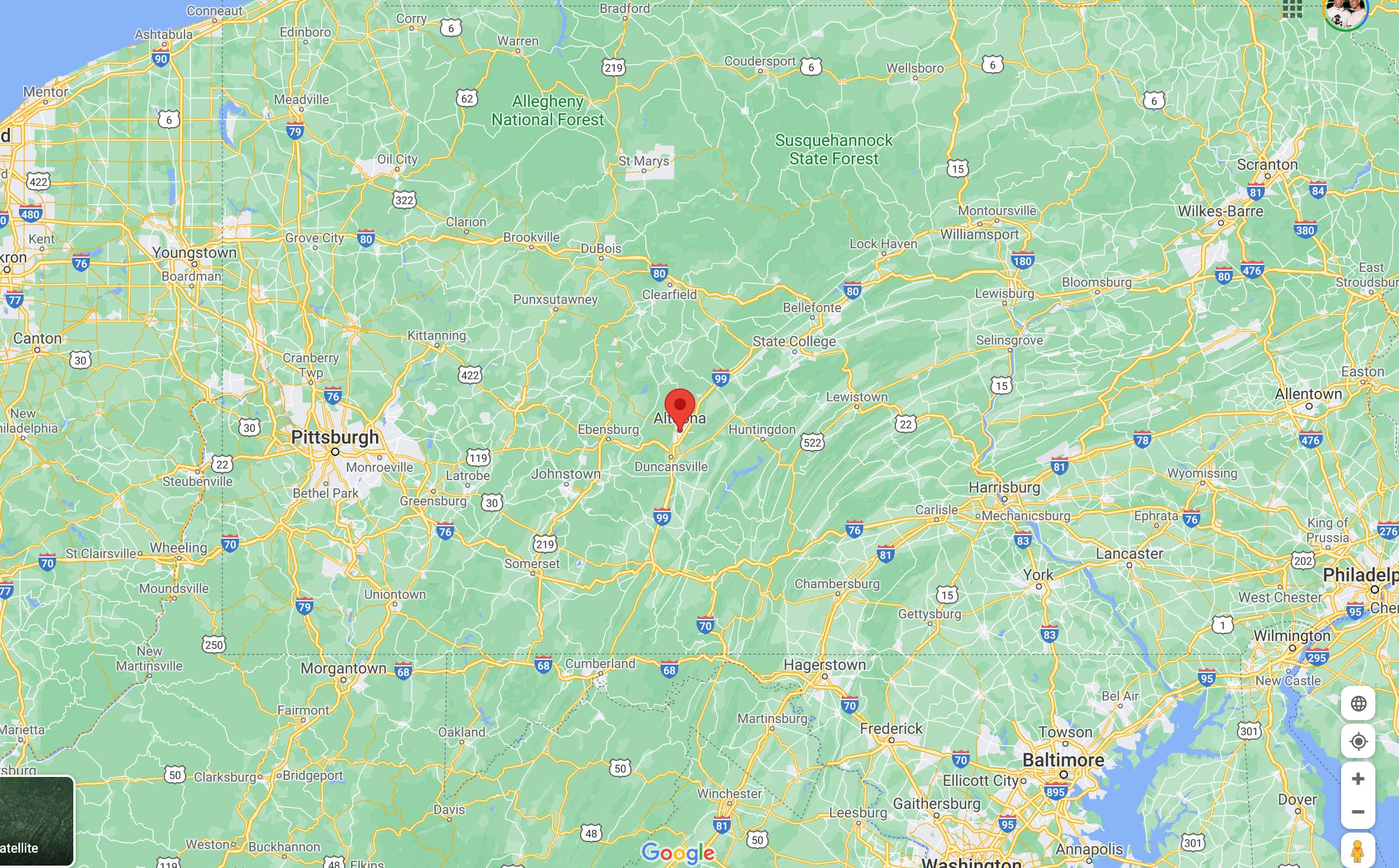 Upon googling what was in store for me once we arrived at 29th Street Pizza and Subs (the place he recommended) my jaw dropped.

I didn't want to spoil the surprise because had I told my fiance what "Altoona Style" was, I would have had to turn the car around and gotten back on 76.

So what is Altoona Style pizza exactly?

Pittsburgh City Paper - we spoke to one Altoona restaurant owner, another Altoona native, and sourced a few Central Pa. restaurant menus, and can assure readers that Altoona Hotel Pizza is real.

Steve Corklic is the owner of 29th Street Pizza Subs & More in the Mansion Park neighborhood of Altoona. His restaurant serves Altoona Hotel Pizza by the slice and he is extremely proud of it.

“It is a legendary pizza, even if you are not from Altoona,” says Corklic. “And I think no one does it better than us.”

Corklic says the pizza style originated at the Altoona Hotel sometime in the 1960s or ‘70s. It is composed of Sicilian-style dough and cut into squares. On top of the dough is a layer of sweet tomato sauce, then some deli-style salami, then a sliced green bell pepper ring, and then topped with yellow cheese. The cheese was at one time Velveeta brand, but Corklic’s pies use yellow American cheese instead.

The style originated from the Altoona Hotel, which was destroyed by a fire in 2013. Since then, however, about a dozen local restaurants have started serving Altoona-style pies. For example, Zach’s Sports Bar off Route 764 offers an “Altoona’s Favorite” pizza on its menu, which is described as Sicilian crust, marinara sauce, American cheese, salami, and green peppers. CO"BRH"s ll restaurant on 6th Avenue also serves the yellow-cheese style pizza.

I know people are going to want to revoke my pizza rating card for this but it Honest-to-God wasn't that bad. Slam me all you want, but from the pictures, I saw before I got there, and what I envisioned it tasting like on the way there, it exceeded my (low, very very low) expectations.

To be honest, the weirdest part wasn't even the American cheese slice on top. It was the hidden slice of salami underneath. But complemented by the green pepper it was actually a nice touch.

The dough itself was excellent. Nice and airy, not too dense.

And the people working at 29th couldn't have been any kinder or nicer. They were blown away that I told them I had driven from Chicago and out of our way to Philly to try their pizza. They insisted I try their regular pizza because they were afraid I wouldn't like their staple, and threw in a cheesesteak which they said was award-winning. Both were awesome.

So if you're in or around the Altoona area swing by and try this out and let me know how much better your taste is than mine on social or in the comment section or be pleasantly surprised by it like I was.

* I was going to originally title this blog "I Ate This "Altoona Style" Pizza This Week And Lived To Tell The Tale" but Coley's been preaching to us to put some thought into our blog titles to draw readers in for the clicks.

p.s. - I visited king Angelo's yesterday. Gonna have to load up my trunk with these for the drive back to Chicago just so I can show all the "pizza experts" I'm friends with there what real pizza is.

p.p.s.- if you've got food recs please send them to me so I can add them to my list. Love trying different stuff from all over. For my top sandwiches in the country check out this blog I did last year-