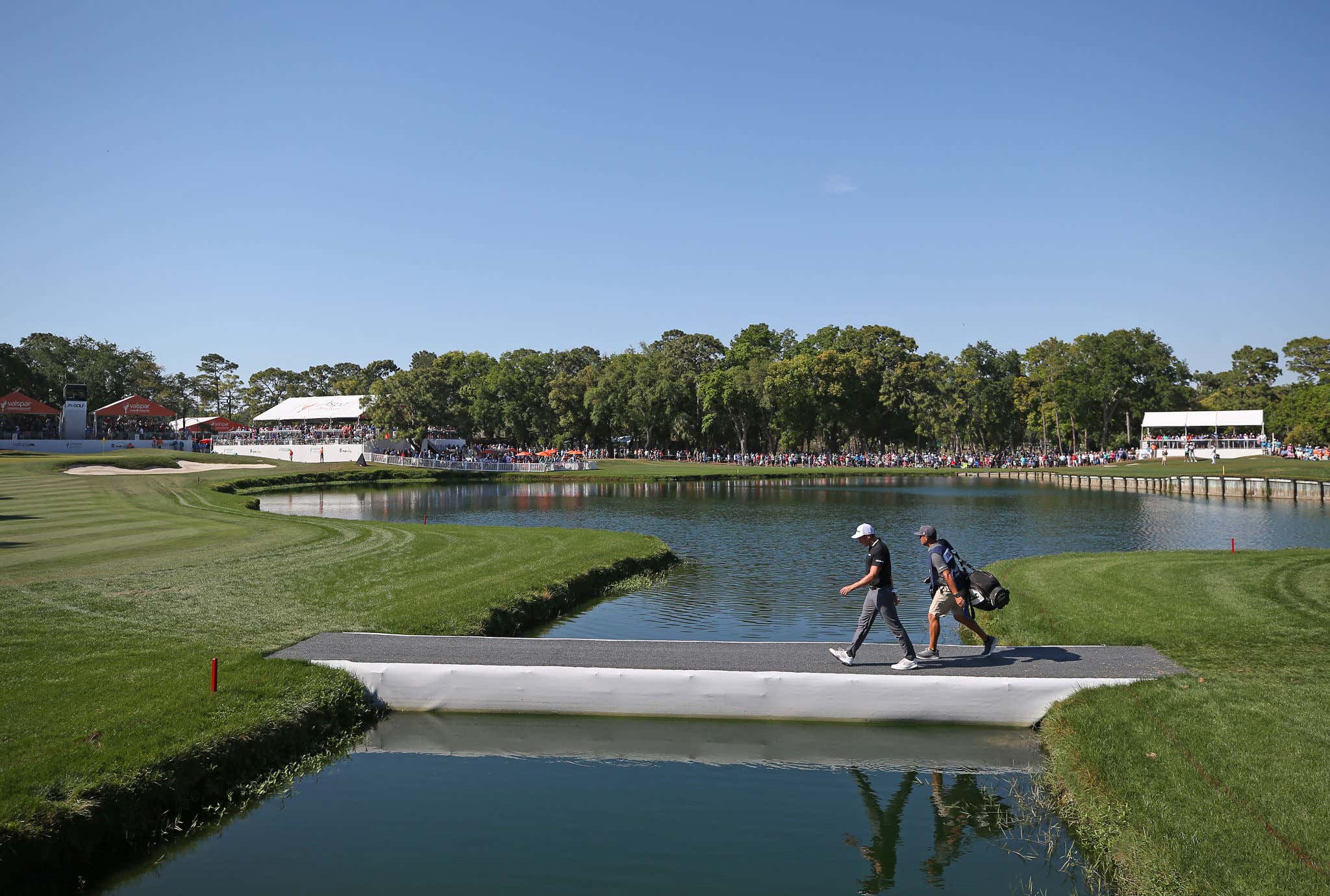 Welcome back to the Copperhead Course at Innisbrook Resort, one of the Tour's most dangerous and challenging tracks. For a good long while this event was played in March as part of the Florida Swing. A couple years ago when the PGA Championship moved from August to May and THE PLAYERS moved from May to March, this event got shuffled around a bit. It wasn't played in 2020 due to COVID, but for now this event has landed here in late April/early May, where honestly… the Tour is in a bit of a quiet period as we lead up to the PGA at Kiawah next month. Next week's Wells Fargo at Quail Hollow is the marquee event between the Masters and the PGA this year, and this is probably the next best thing. It's a decent (but not great) field we have here at a course that can give people fits. More on that later.

Paul Casey is still your defending champion from 2019, when he successfully defended his 2018 title with an -8 score. Most will remember that 2018 title as the first tournament where Tiger really contended on a back 9 on his comeback trail. Threepeats are a rarity in modern golf, so that will be a storyline to track this week for sure. 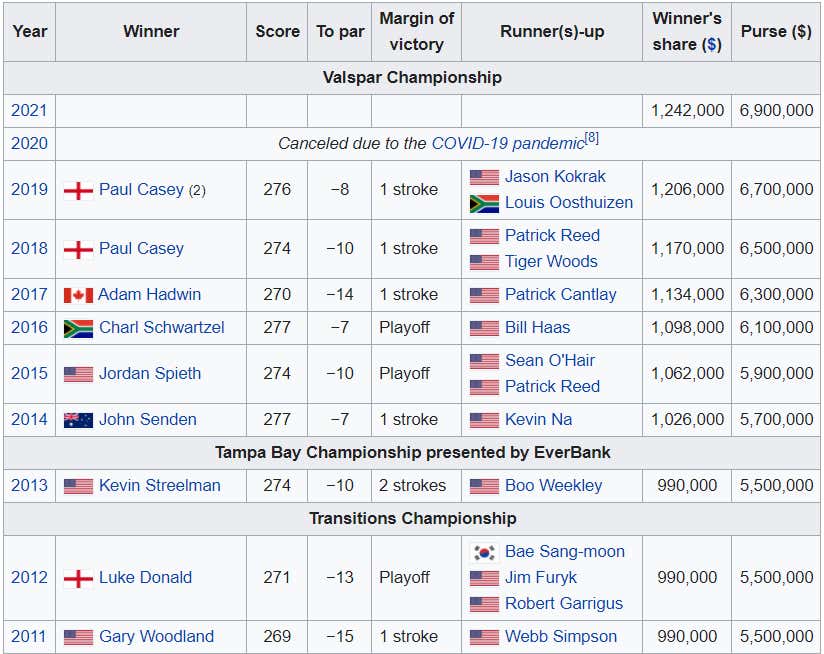 The Copperhead Course is the premier course among 4 courses at the Innisbrook Resort and Golf Club, all of which were designed by Larry Packard. It's a par 71, but not by way that Par 71's are usually constructed. A typical par 71 just means it has one less par 5 than a traditional par 72 course. This course has four par 5's and FIVE par 3's, the shortest of which clocks in at 199 yards. So this is a test of the mid and long irons for sure.

As you can see in the map above, the course is heavily tree-lined with plenty of sharp doglegs thrown in. There's not a lot of spots to catch your breath, and the most dangerous trouble is reserved for the end.

Holes 16-18 are referred to as the Snake Pit. Everything I pretty much said about the Bear Trap at PGA National can apply here. They've even got their own snake to show it. 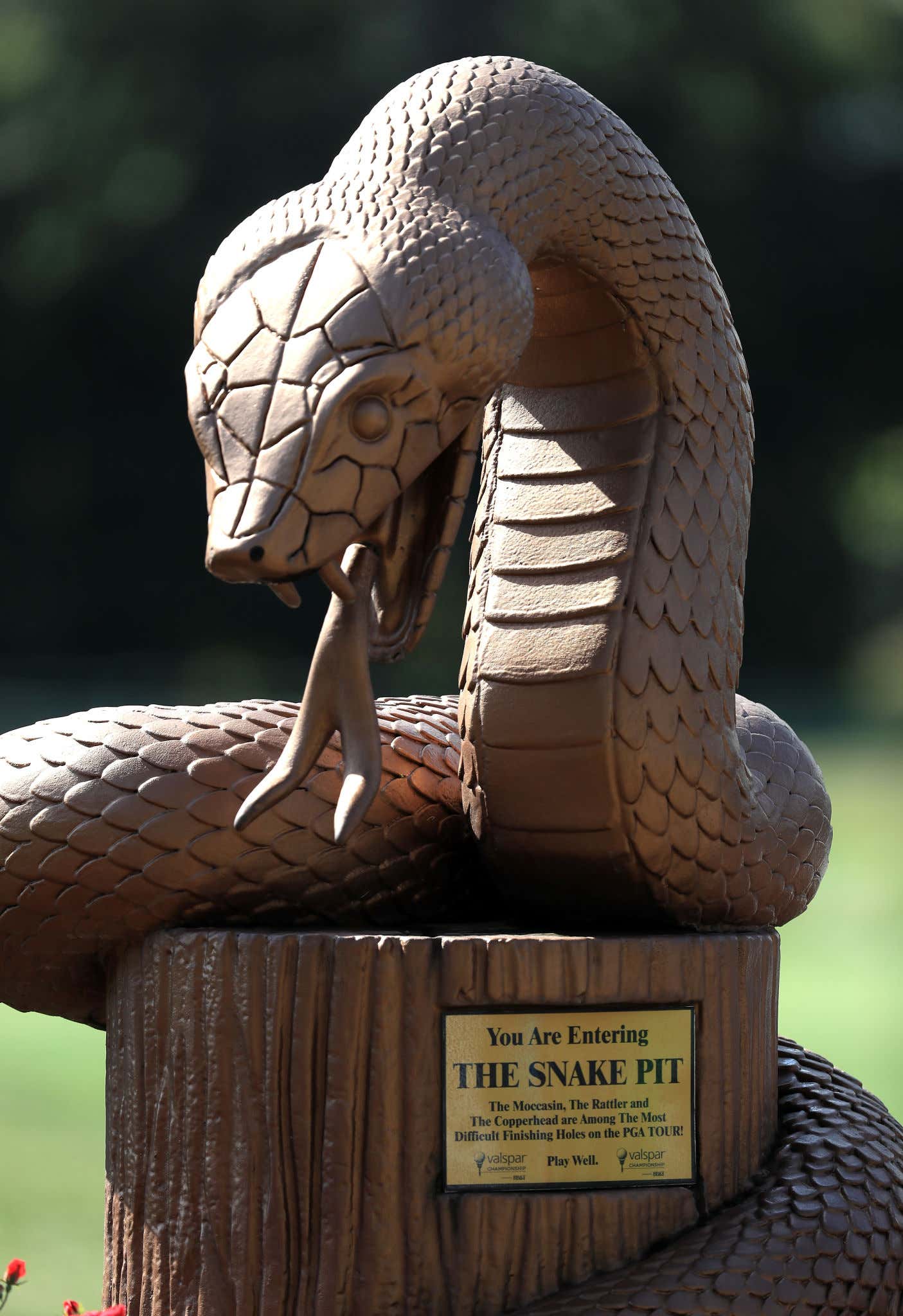 No lead is safe until you've cleaned up at 18, and makes for a ton of drama. All 3 play over par annually with the dogleg right 16th being the toughest hole on the course playing roughly +0.3. 17 and 18 are no picnic either and should make for a ton of great drama down the stretch. As you can see from the margin of victories in the past, this tournament always plays down to the wire.

As I just mentioned, super tough dogleg right here to kick off the Snake Pit. There's really nowhere to hide on this hole. The water right encourages you to try to play it safe down the left side, but the fairway cuts off quick and the rough tends to be gnarly if you miss left. You're really just pushing your risk onto your approach shot if you play it too safe or miss right. The trees and bunker protecting the right side of the green can give you fits if you're not positioned well off the tee. Great challenge for these guys.

Tiger's Silly Highlight of the Week

Tiger rarely played this event early in his career but it was a crucial stepping stone on the 2018 comeback trail in his preparation for that year's Masters. This was the first true sign that he could still do this. That he could still contend and make a charge and put some pressure on the field on a back 9 Sunday. He came up one shot short but him burying that putt on 17 to cut the lead to 1 was so electric. He may not have won that year's Masters and didn't notch a win until much later that year at East Lake, but this was an important event for him regardless.

Also this factoid is just silly.

Featured Groups are here, including an absolute heavyweight bout between JT and DJ.

Heckin glorious. Love to see it. 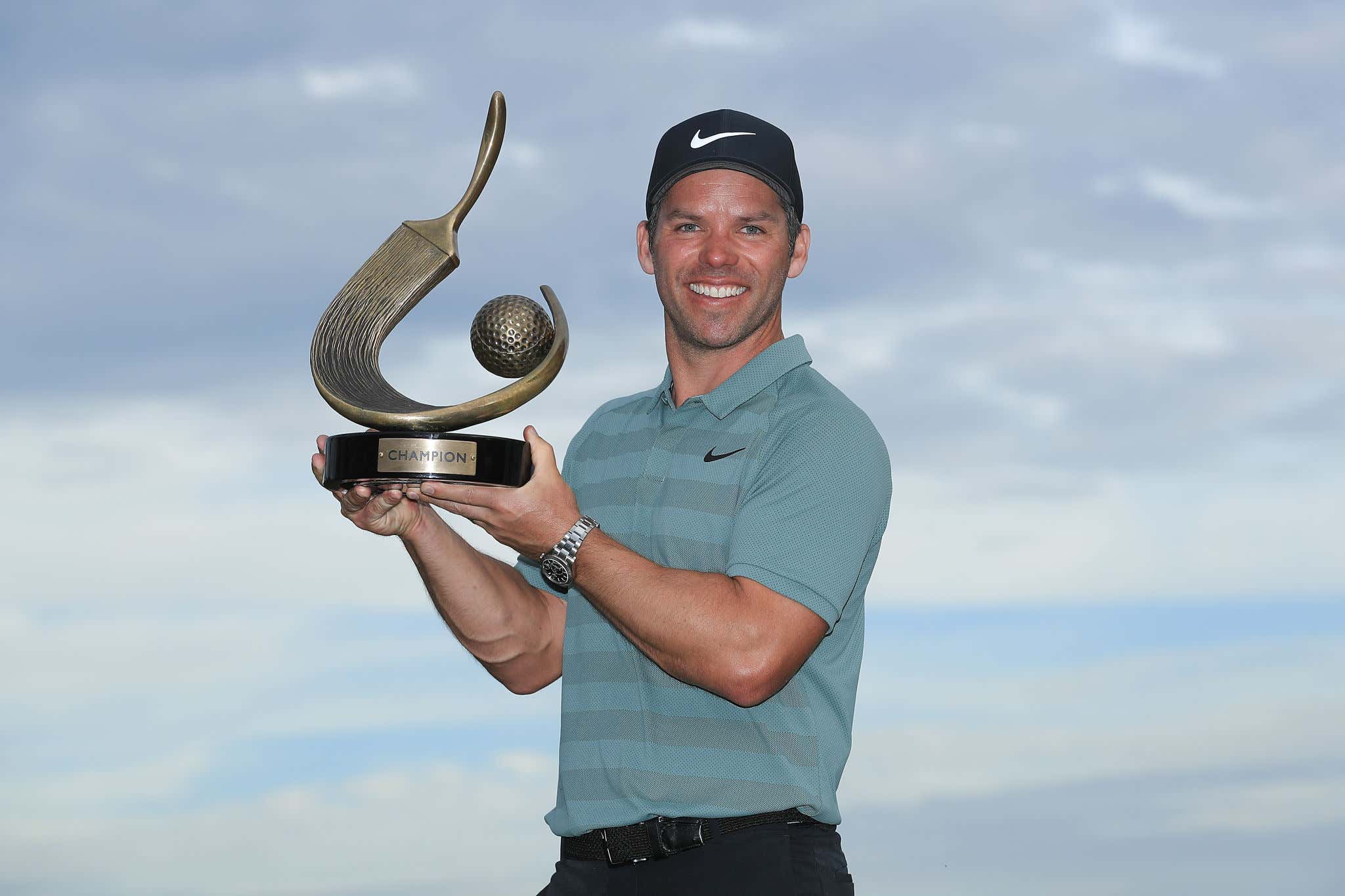 This trophy stinks. No two ways about it. This doesn't belong on the fireplace mantle, this belongs under the slop sink in the basement. Trash trash trash. Overreach by the sponsor and nothing redeeming about it. Worst one yet. Poor Paul Casey to be stuck with two of these things. 1/10.

DJ and JT are the co-favorites at the Barstool Sportsbook at +1000. They're head and shoulders above the rest of the field here and rightfully so. Bonafide thoroughbreds playing a tough course. If I'm picking between those two I'm probably leaning towards JT because his slightly superior long-iron play is a better fit for all these par 3's. That and I think challenging courses where his short game comes into play gives him an advantage. You know what? I just talked myself into making him my pick overall. I'm taking JT +1000 and -125 tournament matchup over DJ. Just the fact alone that he's handicapped at -125 (vs DJ's -103) in that tournament matchup suggests that their Win futures should not be the same. JT should be more like +850 to DJ's +1000.

I'm also going to be taking Viktor Hovland +2000, who I've taken a couple times before. I just really like his approach game and his short game seems to be improving with every week. He and Norweigan teammate (and relative non-entity) Kristoffer Ventura were in contention going into Sunday at the Zurich before blowing up with an alternate shot 78. Here's hoping he's more comfortable going back to golfing his own ball.

Winning Margin - Playoff +350 - All of those tight finishes lead me to believe this is the play. I want to say the handicappers set this line at the same margin every single week regardless of tournament. It's up to us simple brains to take advantage when we see fit. This is one of those times.

Adam Hadwin Group F Winner +335 (over CHIII, Keegan, Burns and Cam Davis) - Former winner here but has the middle odds amongst this group at +335. None of these guys really scare me. Take the guy with good juju here.

Kevin Kisner To Win +10000 - This is disrespectful. These greens are tough. Copperhead yields more 3-putts inside 5 feet than any course on Tour but Riviera. Kiz isn't that guy.

Chez Reavie Top 10 +1100 - I see Chez Reavie wear that Diamondbacks hat every week and then I see that snake pit statue and I got it in my dumb brain that somehow those two should go hand in hand. So this is a pick. Legal tells me I can't tell you that you have to bet it too, so I won't do that. I'll just say this. It's up to you if I ride alone on this.

That's all I got. Enjoy the Valspar.