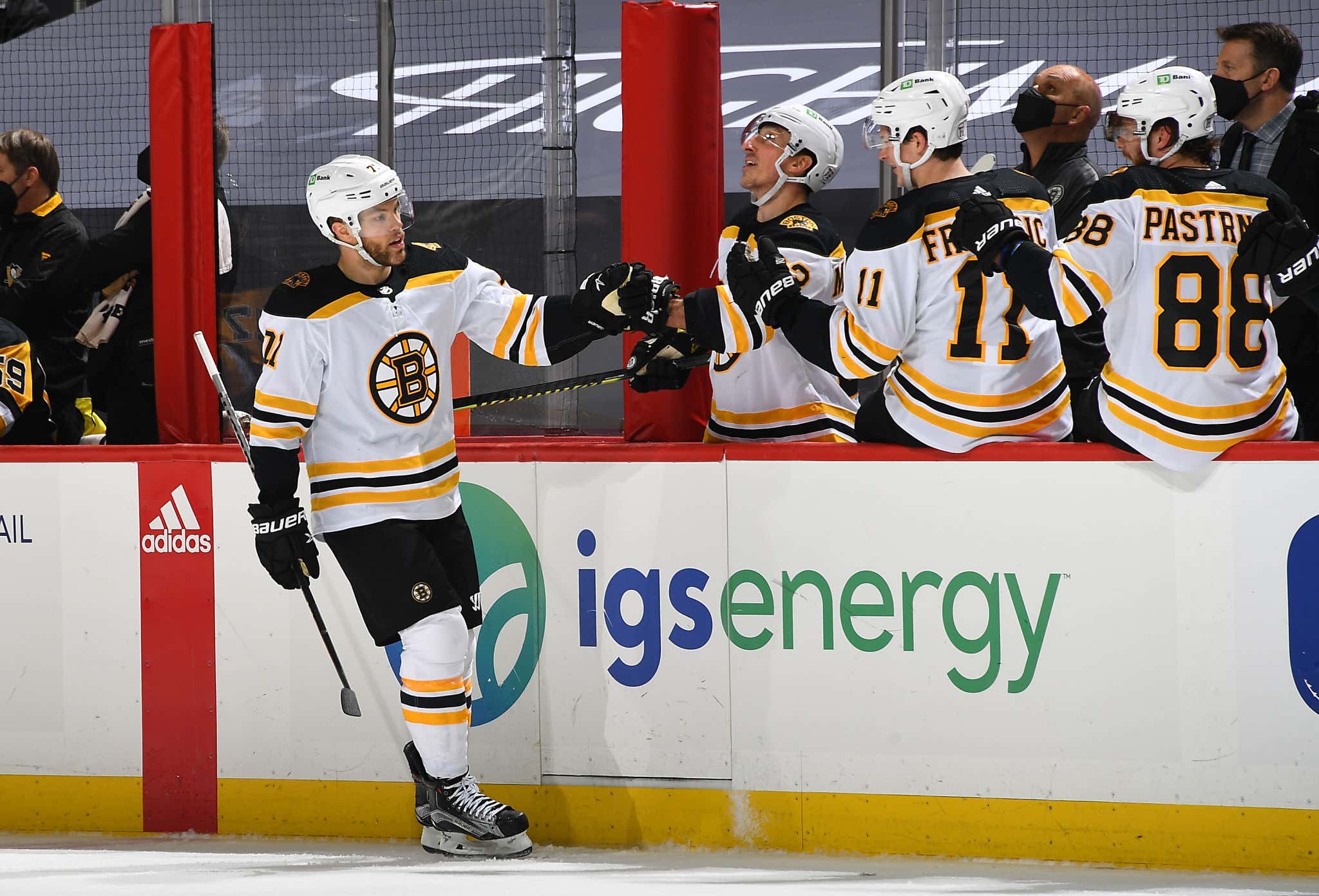 What a win. After two straight ugly losses the B's bounced back with a big 3-1 win in Pittsburgh tonight. Let's talk about ittttt.

No score after 20. B's kill off 2 penalties (holding the stick, too many men). Much better first period than Sunday but they still weren't their best. Tuukka Rask came up big with about 2 or 3 really solid saves to keep it 0-0.

Jeremy Lauzon and Teddy Blueger dropped the gloves, what a bout from Lauzon. Just fed him.

Shortly after the fight Brad Marchand made it 2-0 with his 26th of the year. The 1st line was bound to break through this game, so many chances and they finally cashed in.

Two minutes later Taylor Hall finished a give and go with David Krejci by ripping one bar down. SHEESH. 3-0 Bruins.

Jeff Carter got the Penguins on the board with 2:21 left in the 3rd. An absolute bomb snaps Tuukka Rask's shutout. 3-1 Bruins. 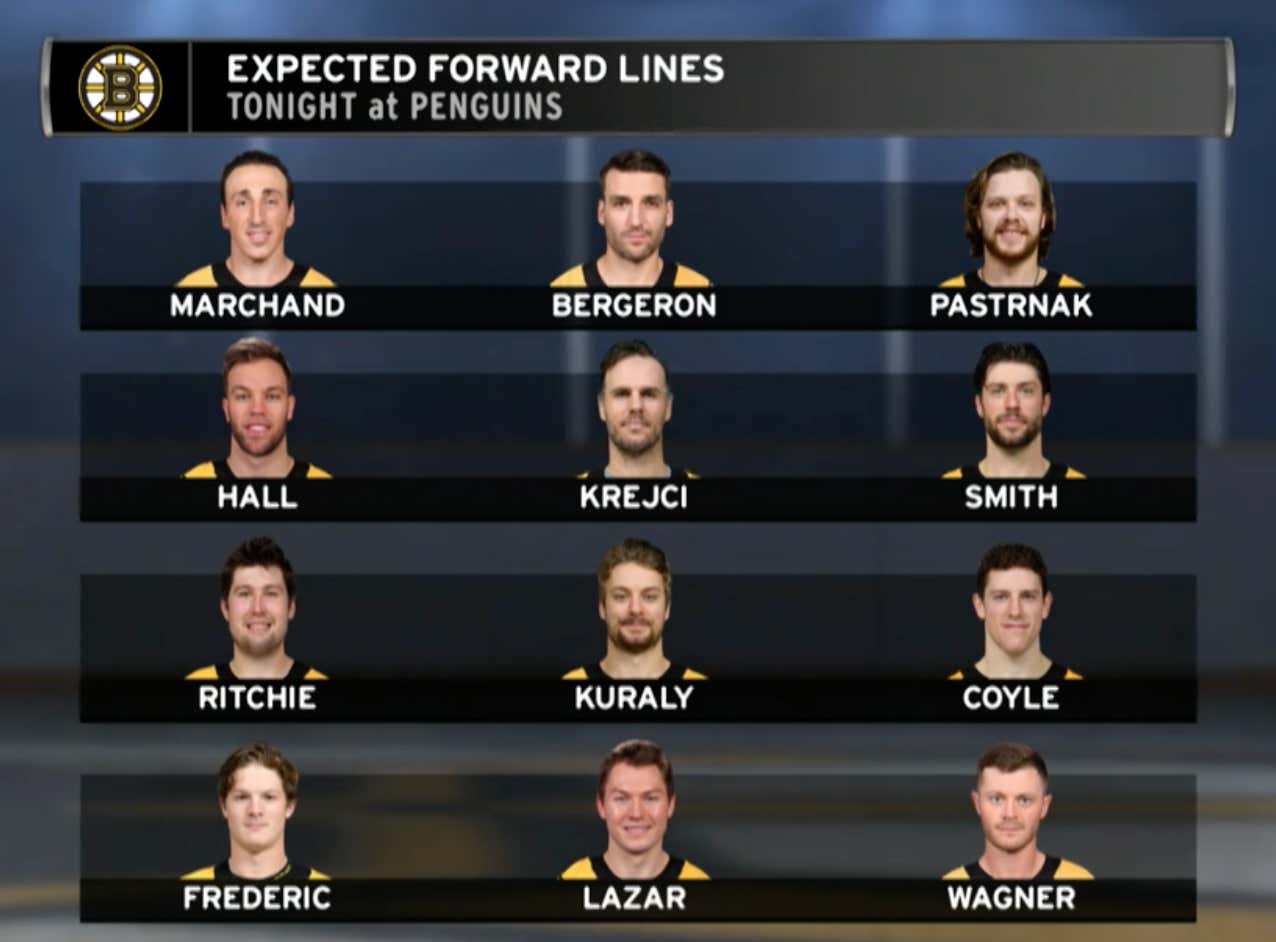 - Charlie Coyle came into tonight with a 27 games goalless streak, but looked really good tonight. He's so close to breaking through. I can feel it.

If you are Bruce Cassidy do you put DeBrusk back in the lineup on Thursday? Always wondered what coaches think after a win. As much as I want to move Craig Smith to that 3rd line, that 2nd line has been really good as of late since the acquisition of Hall.

- Power Play continues to be a dud. Just not getting what used to be so automatic for them. Work to be done.

- Brad Marchand for MVP!!!! His 26th of the year gave the B's some much needed insurance in the 3rd. Top line (top two I should say) were hounding pucks all night long and were generating some great chances. Nice to see Marchand sticking with the play and getting rewarded. He's been the best Bruin this season no doubt.

- 2 goals from 2 guys on the 2nd line. David Krejci (1G, 1A) opened the scoring and Taylor Hall added a sweet goal of his own in the 3rd. Speaking of Taylor Hall (a Boston Bruin), he now has 4 goals in 9 games since coming to Boston. What a goal that was, nice give and go with DK46.

- Tuukka Rask got the nod in net, outstanding with 25 of 26 saves. Made some crucial saves, nearly earned the shutout but Jeff Carter ruined it. Picked up the secondary assist on David Krejci's goal, too. Not a bad night. Bruce Cassidy alluded to how Jeremy Swayman has basically won the back up job for now, so we won't see Halak for the rest of the year it feels like (unless they clinch a playoff berth). We'll see who gets the start on Thursday.

- Felt like a playoff game once again vs. PIT. Who knows how the East is gonna shake out in the last few weeks of the season. B's gotta do their job and keep going.

A look at the standings.. the B's hold their 4 point lead on the Rangers (who beat the Sabres tonight) and have 2 games in hand. 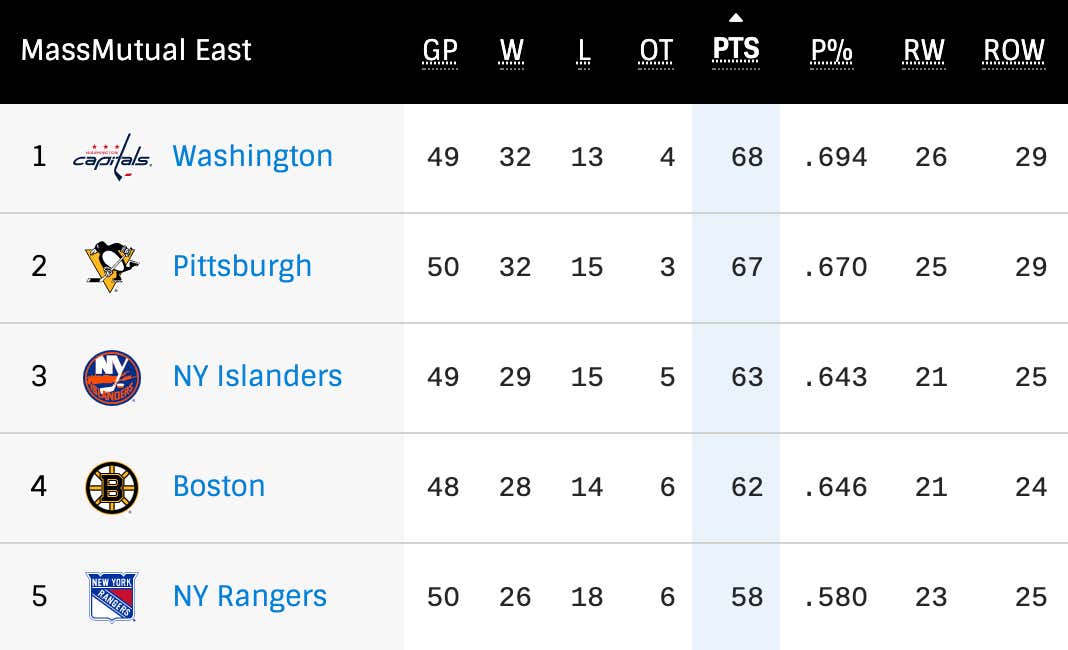 Big bounce back win after 2 straight duds, but like I said the B's gotta keep rolling. They'll head back home as the Buffalo Sabres come to town on Thursday night.