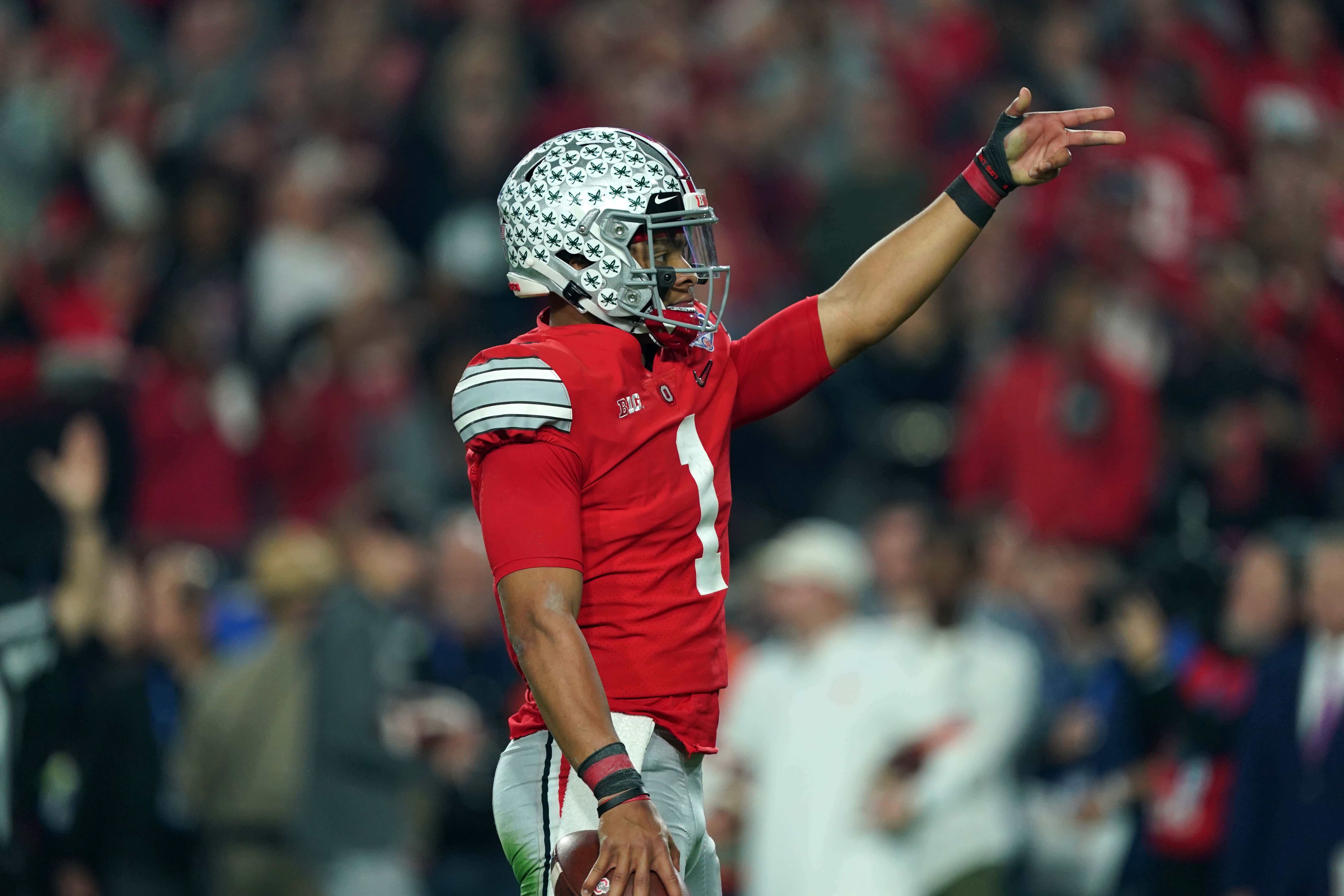 1. I don't understand why people are having such a hard time accepting that Mac Jones is going to San Francisco

At this point it feels like the 49ers traded for the number three pick years ago. That trade has dominated Draft discussions as two schools of thought have been battling it out, with the top two picks all but locked in at this point. The first school of thought, and the one that surfaced instantly in the wake of the trade with the Dolphins: Mac Jones is the apple of Kyle Shanahan's eye. The pushback comes from people who know in their hearts that Justin Fields is better at football than Jones. You can count me as someone who agrees with both here: I believe Fields is a better prospect, yet I have no reason to believe the 49ers are taking anyone but Mac Jones come Thursday night.

There's been a couple thoughts I haven't been able to shake about Jones in this never-ending process. For starters, Jaylen Waddle and DeVonta Smith coming out and saying he was better than Tua. I don't know why they would do that for any reason outside of it being true. They're not going to play together at the next level, at least not immediately. In fact, Smith may well be landing in Miami to reunite with Tua. Maybe the Dolphins trade back up into the teens and get Waddle. Who knows what's going to happen with receivers. But because of that unknown it doesn't make much sense to big up a guy you're done playing with. I don't think 20-year old teammates are the end-all, be-all, but I don't think that should be ignored, either. It's an unqualifiable anecdote, but it means something.

The main thing I feel people are overthinking when it comes to Mac and the 49ers is this forced projection that Shanahan is lusting for a quarterback who can run. Kyle Shanahan has found himself up double digits in two of the last five Super Bowls with quarterbacks who compare much more favorably to Jones than Fields or Trey Lance. If Shanahan is under the impression that a slightly smarter Matt Ryan or a more accurate Jimmy Garoppolo is all he needs to win a 'chip, then it makes a lot of sense that he felt the need to go up to three to get his man. I'd be more inclined to believe that Shanahan is scarred from his time with a mobile quarterback (RGIII) than tantalized at the thought of scoring another.

There's also been people claiming all the of the Mac Jones to San Francisco talk has been a smokescreen. Which would make sense if the 49ers earned the third overall pick. Trading up to three, when we already know who is going first and second, makes the 49ers the de facto top pick. There's some thought that the 49ers are trying to dupe former defensive coordinator Robert Saleh in some desperation heave to make Zach Wilson fall. Listen, I don't think the Jets are smart, either, but they're not that dumb, right? The smokescreen angle, after trading three first rounders to get in this position, has never made sense.

2. Kyle Pitts to the Falcons has been locked in the entire Draft process… but why?

And this is not a knock on Pitts. According to everything I've read, Pitts he's a special talent. He's the guy people have dubbed, "the best overall player in this class," which happens every year and pisses me off every time. I don't understand how people can call quarterback the most important position, have a supposed generational guy going to Jacksonville, then turn around and say Pitts is actually better at the same sport. That math isn't mathing, at all. But I digress. This has less to do with Pitts and more to do with the Atlanta Falcons being a rudderless ship.

It was reported this morning that the Falcons are fielding calls on Julio Jones, which makes sense. Julio isn't a spring chicken, the Falcons are about to hit the reset button, and this may be the best time to get fair value for one of the best receivers in the NFL. They can't trade him until June 1, because the NFL is obsessed with unnecessary hurdles and obstacles I'm sure can be traced back to the Denver Broncos flagrant manipulation of the salary cap in the '90s. But if true, and Julio is on the move in the coming months, why not Ja'Marr Chase? Trade Julio for more assets to be used in future drafts, bring in his immediate replacement right now with a player widely considered the best receiver prospect in years, seems simple enough. Better yet, why pass up on Penei Sewell? I'm not going to sit here and pretend to know the intricacies of the Falcons offensive line, but I'm sure a team picking fourth - a team that has used multiple top picks in recent years on mending that offensive line - could use a generational tackle talent in the building. Call it a hunch.

I image trading back is what the Falcons would prefer to do, but to who? Any quarterback hungry team isn't going to pay the same premium the 49ers did for the fourth quarterback available. Maybe once the Falcons are on the clock they can settle on a more palatable price with the Broncos or Patriots or Football Team. Maybe the Broncos only like three quarterbacks in this class and none of them are available at four; perhaps the Patriots and Football Team aren't giving up anything more than picks in this Draft in conversations, the Falcons may just be stuck here. And if they are stuck here, and Justin Fields is staring them in the face, would they be wrong to get their quarterback of the future now?

3. In a class so deep at tackle, the Chiefs elected to trade for a proven one in search of a new contract. What can we read into that?

Penei Sewell, Christian Darrisaw, Rashawn Slater, Alijah Vera-Tucker, Walker Little, Teven Jenkins, Dillon Radunz, Samuel Cosmi, Alex Leatherwood, Jackson Carman, Liam Eichenberg, and Brady Christensen are all projected to be top-90 picks. At least four of those guys were not going to be available by the time the Chiefs were slated to pick at 31. Orlando Brown is a proven commodity, the Chiefs are ready to compete now, I understand their interest in taking the known at a premium. You could very easily argue that there is no price too high to protect Patrick Mahomes, and I'd agree.

But with the class this deep, coupled with the Chiefs being in perpetual cap hell, you would still think that staying put at 31 and locking up a more cost effective tackle would be the move. Unless, of course, you have zero faith in this year's class. There's a sentiment brewing right now that some teams may not be all that comfortable with the totality of this draft class due to COVID both shortening some seasons and eliminating others entirely. A player like Miami EDGE Gregory Rousseau could go as high as 11 to the Giants or be out of the first round entirely. Did the Chiefs make the first move signaling a sign of things to come this weekend? If a team typically has 150 players on its draft board, and that number has been cut down significantly, why not try and package picks to either: trade up and target players you feel most confident towards OR trade out entirely for proven players and projected cut candidates.

4. The Lions and Bears should be doing everything they can to trade down

This runs almost counter to what I just said, but stay with me for a second. While the Falcons may not be able to find a trade partner for the fourth quarterback selected, the Lions should be able to with relative ease. The Broncos sit two picks behind, which gives a team like the Patriots plenty of incentive to get above Denver if Fields is available. And while teams may not be all that comfortable with this class of prospects, there is an argument to be made that you want more picks, not less. Cast a wider net. Just because you weren't able to scout these players as you would in a normal year doesn't mean the players are bad. It just means teams are less comfortable. Which, maybe that's a good thing. It's not as if teams historically have 100% hit rates when it comes to the Draft. Perhaps not being able to overthink certain players will lead to more hits. The Lions have big, gaping holes to fill everywhere on the roster. Taking the best player available at seven feels like a waste of time when they could land a similar caliber player in the teens along with whatever other assets they pick up in a trade.

The poor Bears. Outside of the Falcons I don't know a team in a less desirable slot in the entire first round. Every other team I could sit here and build a case around why they're in a decent spot to either trade up, trade back, or have the best fit fall right in their lap. The Bears need a quarterback, that's not news. There's maybe five quarterbacks in a Draft where they have their first round pick, and that pick is in the back third of the first round. Brutal. They signed Andy Dalton, who couldn't make it work in a dome with a great receiving corp last year. Are they going to say fuck it and hope Kyle Trask or Davis Mills is their guy? Yikes. They should be working the phones with Jacksonville. After the Jaguars land Trevor Lawrence at one they hold three more picks in the top-45. Trade back from 20 to 25 and try and pick up that 45th overall selection. That would give the Bears 25, 45, and 52. Now they can take a swing at one of those third (fourth?) tier quarterbacks and mitigate the risk while filling more holes. All of this falls under the "no shit, Sherlock" line of thinking. That every team in the League should be trying to manipulate the Draft like this. But come Thursday night you know teams are going to fuck up and fuck up instantly. It happens every single year, a team makes a decision that's instantly panned and that panning is ultimately correct. That team has been the Bears so I don't think it's crazy to assume they need a little nudge in the right direction.

5. COVID robbed us of the Vegas Draft boats and I'll never get over it

Last January it was announced that the NFL Draft in Las Vegas would feature boats in the Bellagio fountain escorting prospects to the floating stage. We were robbed of what I can only imagine would've been the biggest shitshow in televised sports history. Players falling overboard. A poorly time geyser blasting Goodell in the temple. An engine bursting into flames causing all aboard to jump into the fountain, making one of the prospects swim everyone to safety a la JFK, almost assuredly rising his stock and causing chaos in war rooms nationwide. That's the type of electricity we, as a society, had taken from us. I know Goodell is happy as a clam that he's vaccinated and can force hugs upon these prospects this year, but it's simply not enough. If we don't get Vegas fountain boats next year then the plague truly won.