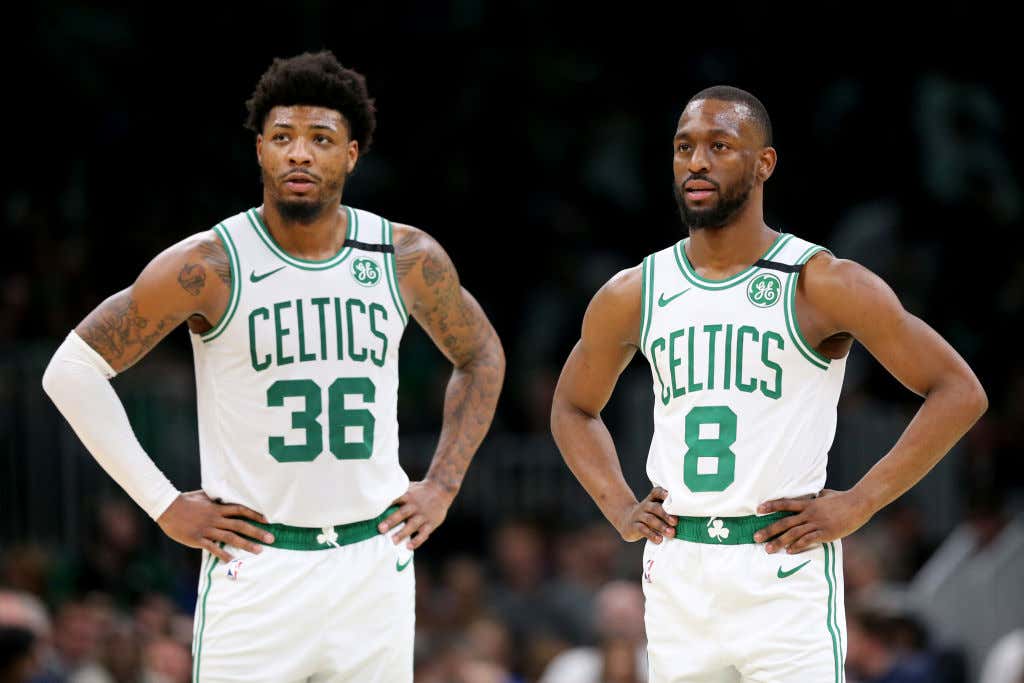 For pretty much the entire Brad Stevens era, the point guard position has been extremely important. Getting high level production from the backcourt at least in my opinion has always been the head of the snake. Even with two All Star wings, everything for me always comes back to how their backcourt performs. Think about it, first, there was Rondo. His brief time in the Brad era wasn't great. He shot just 40/29% in his first 30 games, and then as we know was then traded 22 games into the next season, which he was shooting 40/25%. Things obviously worked out for Rondo, but it was an early sign of how important this position is to Brad's system.

Then we had the Isaiah era. That speaks for itself. Then came the Kyrie era. When he showed up and delivered, this team was hard to beat. When he wasn't right or didn't show up, you get the MIL series. Then enter the Kemba era. It's the same thing. When he's right, this team reaches a different level. They become that much harder to guard. But when he's not right, this team is pretty easy to beat. So much of Brad's system relies on consistent and elite production from the point guard spot. Having that option next to the Jays is what opens everything up for them.

Which is why for most of this season, a lot of the frustration stems from how the starting backcourt had been playing. The Smart/Kemba pairing had a brutal start to the season, then Smart got hurt and things only spiraled from there. The Celts did not look like the same group we've seen year in and year out during the Brad Stevens era. Now, they do. Why?

The turnaround from their starting backcourt.

I touched on this earlier in the game recap blog, but it deserves a deeper dive. One of the biggest reasons for this turnaround is because Marcus Smart and Kemba Walker are returning back to the players we know them to be.

The change between this version of Smart and the one we saw to start the year is night and day. The biggest change is obviously his defense. We can admit it sucked ass for the majority of the year. Post injury I get, but it was bad even prior to getting hurt. From the start of the year up until that Lakers game, his defensive metrics were pretty gross by his standards

If you watched Smart, you could see it. The intensity wasn't there. He wasn't making opponents feel his presence on the defensive end, especially along the perimeter. He wasn't stopping penetration, he wasn't guarding the three point line, it felt like every single night the best player on the other team was lighting him up. Now look at what he's been doing during this turnaround since the deadline

He's improved across the board. But it's not just the stats, it's the eye test as well. He's much more active, he is actually being assertive defensively instead of reactionary. That whole best player lighting him up thing? Look at some of these matchups

Is anyone surprised that since the deadline the Celts have a top 5 defense at the same time that Smart has returned to his All NBA form defensively? Shit, they are just outside the top 10 for the season after this turnaround. That's not an accident. He sets the one on that end, he's always tasked with guarding the opposing team's best player, and now he's actually coming through.

Then you move to the offensive end. Since the deadline we've seen more minutes of the top 4 rotation players on the court together than we had the entire season. What that's done is allow Smart to slide back into his #4 role, where his value is more through playmaking and defense than shooting. Since the deadline he's shooting 10.6 FGA a night (6.1 3PA), putting up 14.6/4.6/5.9 on 44/39% splits. That efficiency is a big deal. Compare that to his 39/32% before the deadline, the interesting thing is his FGA were actually 10.4. You see, it's never really been about how many shots Smart takes, but more so the type of shots he takes. When guys are out, Smart's role changes to where he needs to be more of a scorer. That forces him to take shots he wouldn't normally take. But in this role? With guys back? He's been able to find ways to not force things offensively. He's shooting 37% as a catch & shoot guy from three. Who wouldn't take that?

As a playmaker, Smart's AST% sits at 22.2% over this stretch. His +10.7 net rating is the highest of any starter (Thompson is +14.2, but he's only starting w/ Rob out). From the start of the season through the deadline, he had a -0.7 net rating. That's what I mean when I say he's been a completely different player.

Then there's Kemba. For some reason, the entire narrative of his season has revolved around his first 10 games. That's weird, but it is what it is. The fact is after that slow start, he's basically been the exact same player he was last year, when he made the All Star team. The frustating thing is how he doesn't play back to backs, and the occasional stinker offensively, but for the most part he's been about what you would expect from a #3 option.

Since the deadline, where the Celts are 8-1 in games he's played. Here's how he's doing

You'll notice that during this stretch, there weren't really any B2Bs. That's important because the playoffs do not have B2Bs. Watching Kemba during this stretch what should be encouraging to you is how he's scoring. He's driving to the rim 9.7 times a game, shooting 49% on those drives, and 51.2% of his points are coming off drives. That's HUGE. As a catch& shoot guy, just like Smart he's at 37.9% from three. Also very important given how much attention the Jays get on the offensive end. His TS% percentage is up big from 53% before the deadline.

It's pretty clear that Kemba's issues were not that he was washed or that he couldn't be the same guy. It was a rhythm issue. Now he's starting to find his rhythm and look at what a difference it makes. Just look at how he's done against the better teams during this stretch

The playmaking is what stands out to me. Now when Kemba drives to the rim, he's either finishing or he's finding his teammates in a position to where they can score. Since the deadline, 60% of the Celts FGM are coming off assists. Unassisted FGM come in at 39.8%. That tells me we're seeing less iso, and more ball movement. Kemba's play as a facilitator is a big time factor in that along with Smart getting back to his traditional role.

Just compare that to pre-deadline. The Celts were 28th in assisted FGM at 55.1% and 3rd in the NBA in unassisted FGM at 44.9%. As a result, their record sucked dick. Now those numbers have flipped, and they've had the best record in the East since the deadline. It's not rocket science and you can thank the starting backcourt for contributing to that turnaround.

So what does all this mean? For me, it means that if the Celts are going to finish strong and do anything in the playoffs, a huge part of that comes down to the play of their starting backcourt. It's not an accident that while the Jays have been consistently good all year, that ultimately the success of this team kind of hinders on how Smart/Kemba play. The good news is nothing we are seeing during this stretch is unsustainable. Smart getting back to his All NBA defensive self is more the rule not the exception. Kemba looking healthy and being more aggressive as both a scorer and a playmaker isn't something he can't continue to do as long as he's healthy.

That's why you should have some excitement for what this team can do moving forward. We still need to see them play at this level for the rest of the way, but the early signs are there. Took long as hell for us to get here, but at least we're here.