Source - Kourtney Kardashian is the queen of risqué this week -- first she was sucking on Travis Barker's thumb for the 'Gram ... now she's openly asking the public about rough sex.

KK posted a very racy pic -- a photo of herself, it seems, that captures her lower half, fully unbuttoned and fairly exposed near the groin area. Kourtney's belly button and white panties are exposed, which have "Oui" embroidered right on the front ... and in red, no less. 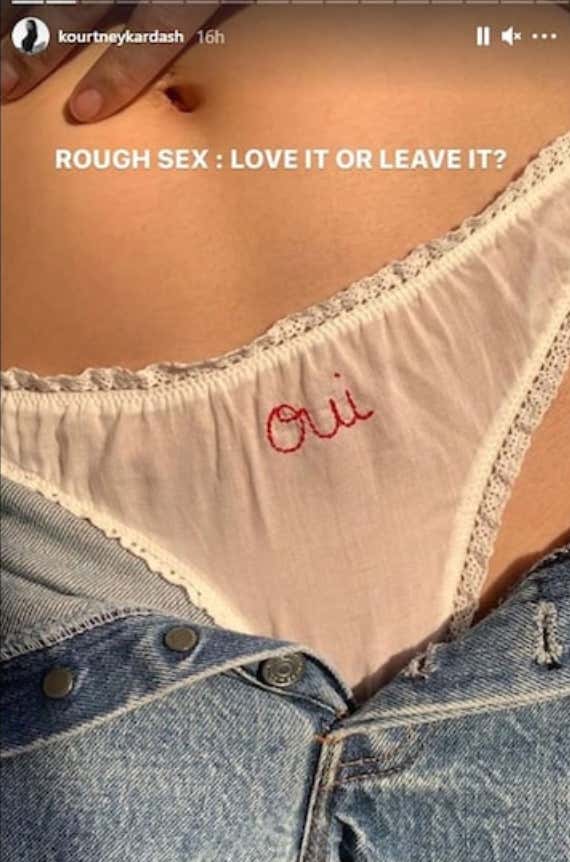 On top of that, there was a question she posed to her followers -- "ROUGH SEX: LOVE IT OR LEAVE IT?" Yeah, we know t's pretty hot. But also…maybe too much??

We're not clutching our pearls here -- just noticing a trend carrying over from the weekend. You'll recall, Kourtney's BF, Travis Barker, posted a video of her sucking on his thumb … which looked like something else at first glance. Either way, it's been PDA times 10 lately.

Just when we thought Kourtney Kardashian couldn't get any hornier…she does. Granted this one isn't as bad as when she was sucking on Travis Barker's thumb…

but still, asking your 116 MILLION Instagram followers whether or not they like "rough sex" while showing a picture of you in your undies is next level horny. Especially for a forty-two year old mother of three. That said, this relationship can't last, right? They started out wayyyy too hot. It's just a play to make Scott jealous because he's been banging every nineteen year old in sight for the last two years. Regardless, good for Kourt. I just hope her kids don't see the video of her sucking off Travis Barker's thumb. Then again, it's not that bad compared to what Auntie Kim has floating around on the internet. Oh well. Congrats to the happy couple, can't wait to see what they post next!!