I had to wait until Sunday to post this because Sunday was Frank's day. 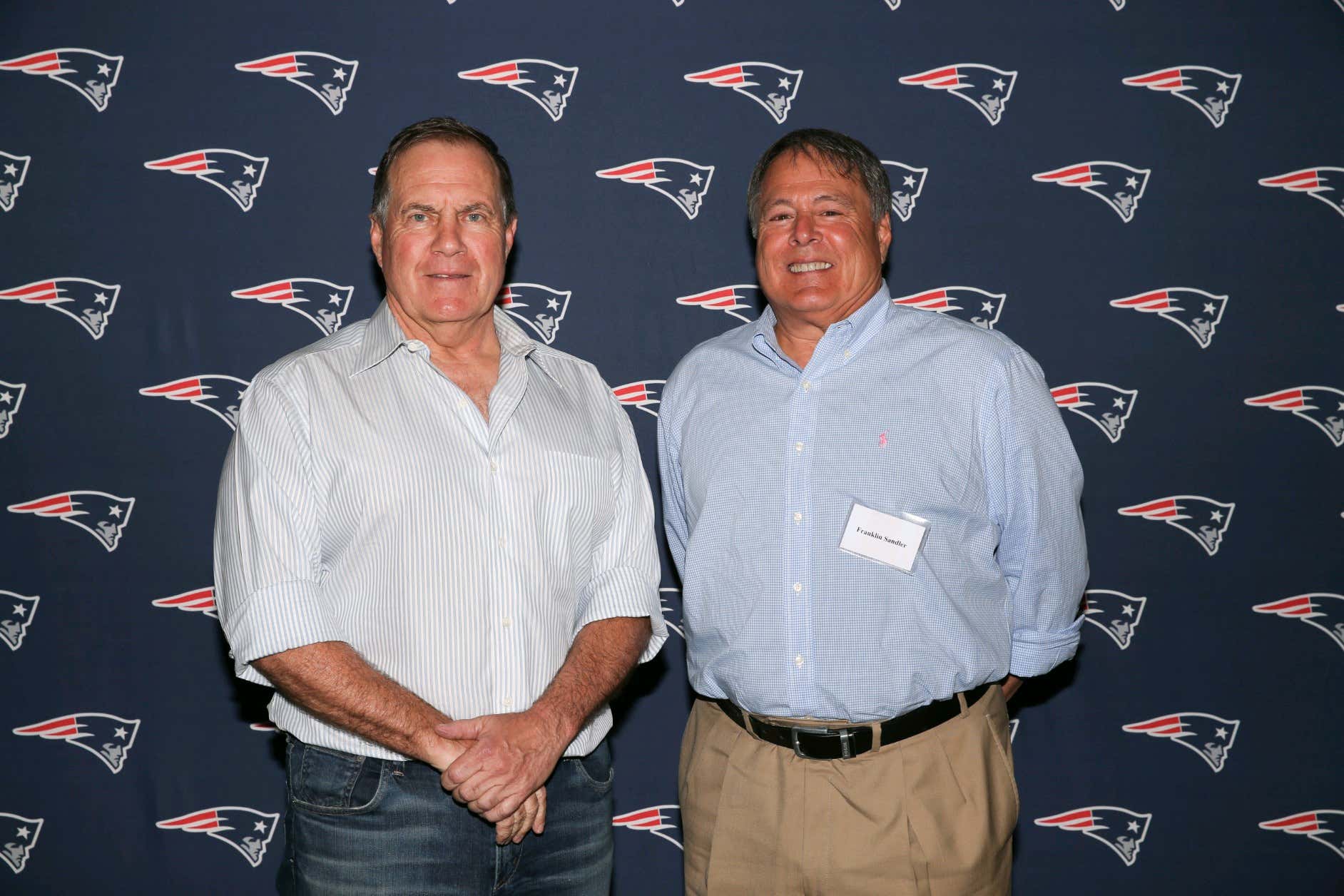 Boston Globe - SANDLER, Franklin Gary Of Foxborough, MA, entered into rest on Sunday, April 11, 2021 at the age of 69. Beloved husband of Carol B. (Spellman) Sandler. Dear son of the late Joseph and Ruby (Freedman) Sandler. Devoted father of Bryan William Sandler and his wife Elizabeth, Michael Philip Sandler and his wife Kelly, and Scott Louis Sandler. Loving brother of Noreen Wiseman and Bonni-Lynne Sandler and her husband John Lavin. Cherished grandfather of Noah Joseph Sandler, EllaMarie Audrey Sandler, Aubriana Ruby Sandler, Alanna Natale Sandler, and Amelia Carol Sandler. Frank was a devoted Pop and Patriots fan. Due to the pandemic, services will be livestreamed on Wednesday, April 14 at 10:00 AM. Link and full obituary at www.stanetskycanton.com. In lieu of flowers, expressions of sympathy in his memory may be made to The Barstool Sports Fund at barstoolsports.com/the-barstool-fund.

(Note the donation mention to Barstool Fund in lieu of flowers)

The world lost a great one when Frank passed away. And when I say great, I mean incredible.

If you're lucky, you know one, maybe two, people that are just on another level. They're always happy. They give off this aura of good vibes that people gravitate towards and everybody seems to love them and being around them. They're over-the-top kind, grossly generous, with zero ulterior motives. Just truly good-hearted people.

That was Frank Sandler.

I got pretty close to Gaz on the Blackout Tour, spending every hour with a guy and sharing motel rooms tends to do that, and by extension all his close friends.

I wish Paul blogged or showed more of his personal life because his friends circle is one of the greatest casts of characters I have ever met. The most Boston (Allston) group of assholes you'll ever come across.

One of them in particular goes by the name of Walsh.

Walsh is a legend. I've seen him both knock people out having Paul's back, and have to be separated from trying to knock Paul out within the span of a few days. He worked on our tour in between construction jobs basically for free and busted ass like a madman.

I became pals with Walsh quickly. At first, it seemed we had little in common but we hit it off and realized we shared a lot more similar interests, and drink preferences, than originally thought. And we had the Patriots. Walsh was a season ticket holder and never missed a game. Whenever I couldn't find anybody that wanted to go with me because it would be snowing or raining or they had plans, Walsh was always down to hit Howl At The Moon bright and early at 8am with me before heading into Gillette around noon.

Through Walsh, and Gaz, I had the pleasure of meeting some of their best friends since they were kids, The Sandler family- Mike, Scott, and their dad, Frank. Also season ticket holders, but insane fans. Like Jerry Thornton level insane. I’m talking summer camp practice attending fans. As I got to know them I came to realize they lived basically right behind Gillette, they arrived pretty much when doors opened, every game, and they knew every position player by name and number. Practice squad guys, what schools they went to, where they played before New England.

They also knew freaking everybody at Gillette. When Frank and his boys walked into the place every usher knew and greeted them by name. As did every other die-hard, season ticket holder in Section 134. , 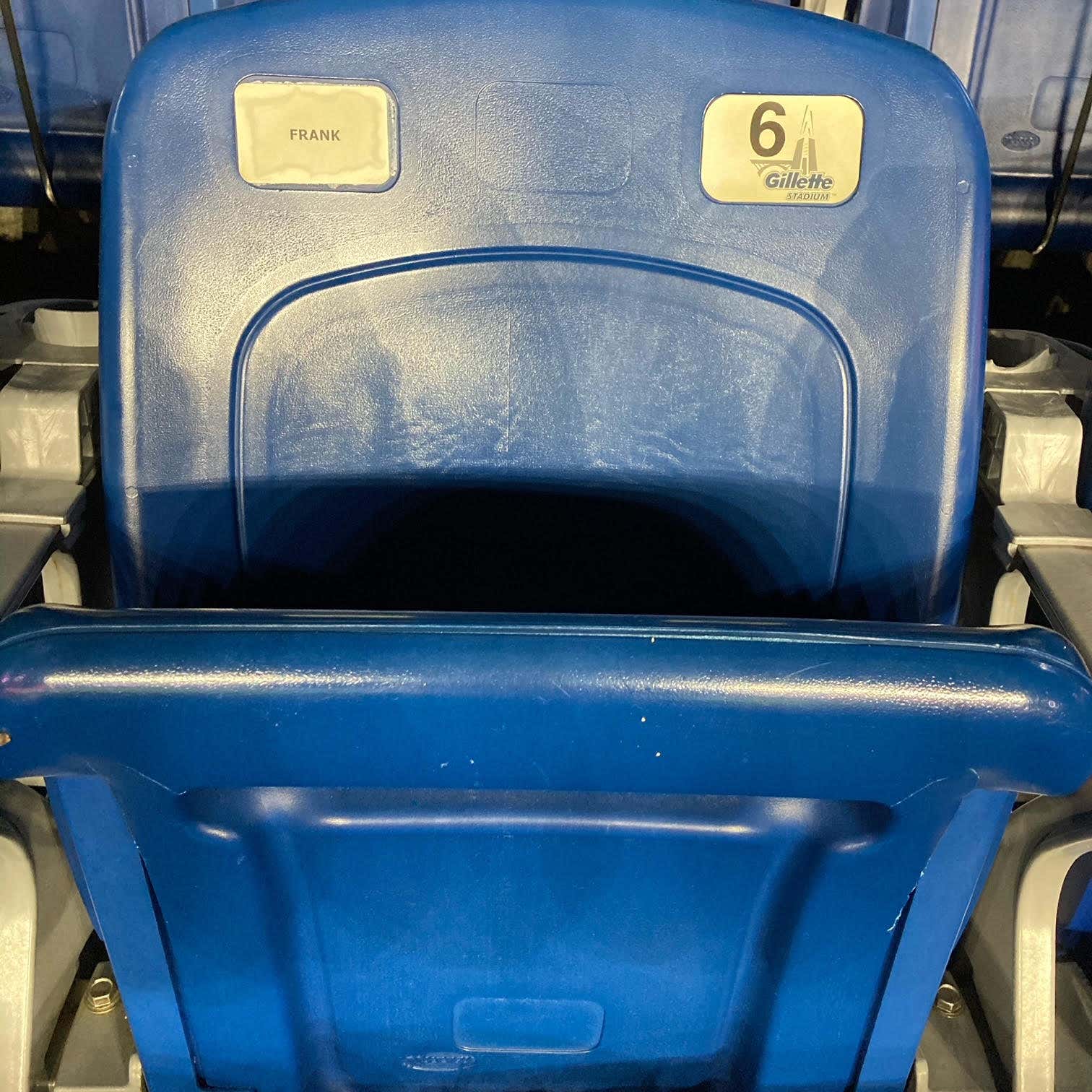 That's what comes with the territory of being the second-longest season ticket holder in franchise history.

Frank's story goes back to the days of the Boston Patriots playing at Nickerson Field at BU in 1960 and '61. He attended every one of the fledgling team's AFL matchups and followed the team when they upgraded to games at Harvard in 1962, and then Fenway in '63.

When the team renamed themselves the New England Patriots and relocated to Foxboro in 1971 Frank was there to follow. He scooped up season tickets the second they were made available. (I asked his sons how he wasn’t the longest running season ticket holder if he had literally had them since day 1. They said they weren’t sure but he was told he was #2). He landed in section 209, while a young Robert Kraft would be in section 210 next to him.

Like all 1970s-1990s traumatized Pats, fans they bonded over the anguish of watching poorly coached teams from the freezing cold aluminum bleachers at Foxboro Stadium.

In the '80s, Frank began a sales company and worked his ass off to grow it. In the mid-90s he relocated to Foxboro "so that he could be closer to the new stadium scheduled to be built and to secure Foxboro resident parking passes." (lol). The company grew and grew and so did Frank's dedication to the team.

I met Frank and his sons around 2014/15 and began a beautiful friendship. We would see each other 7 or 8 Sundays a year in Foxboro, as well as a few random away games we would select the summer before.

Frank never missed a home game. I mean never. I think there was a total of 5 he couldn't make due to family events over the course of the Patriots' existence.

A few years ago NECN did a cool piece on The Sandler's and their fandom.

Frank bought a house so close to Gillette that he could walk to it. Behind the big Bass Pro Shop in Patriot Place, there's a huge cranberry bog. On the other side of that is Frank's house. We would park there and walk through the bog to avoid having to deal with the Route 1 nightmare. 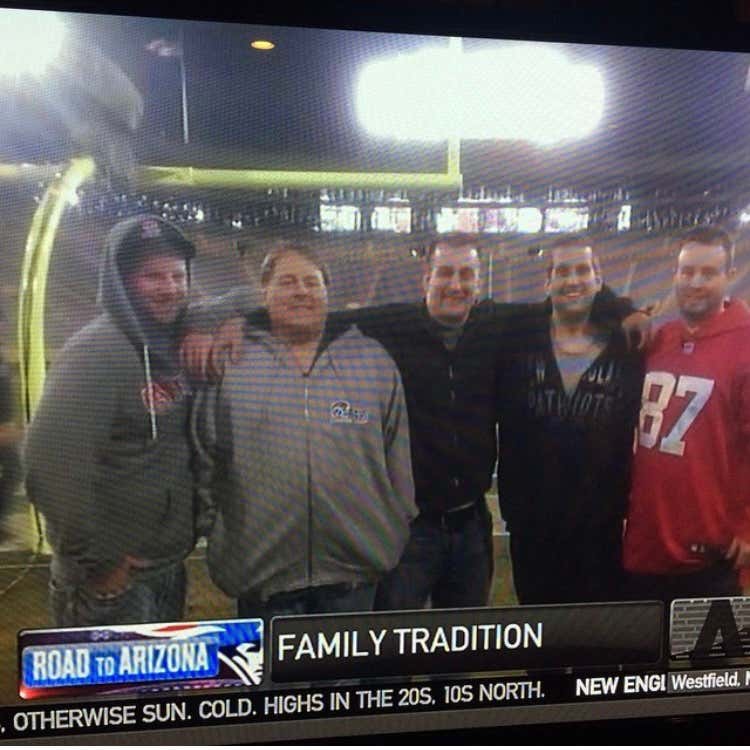 Frank had Optum club passes, which is the section on the field behind the south end zone. It's insane. But he never wanted to use them because he hated being able to only see action from one side of the field really and not having a sideline view of the formations. So he would always give them to his sons, Walsh, and me.

We would hit a few away games every year at some of the more epic stadiums or teams outside the conference. The most amazing being the trips to Lambeau, (absolutely incredible atmosphere, stadium, surrounding area, and believe it or not, fans), Arrowhead, Baltimore, the Meadowlands, Indy, and all the Super Bowls. 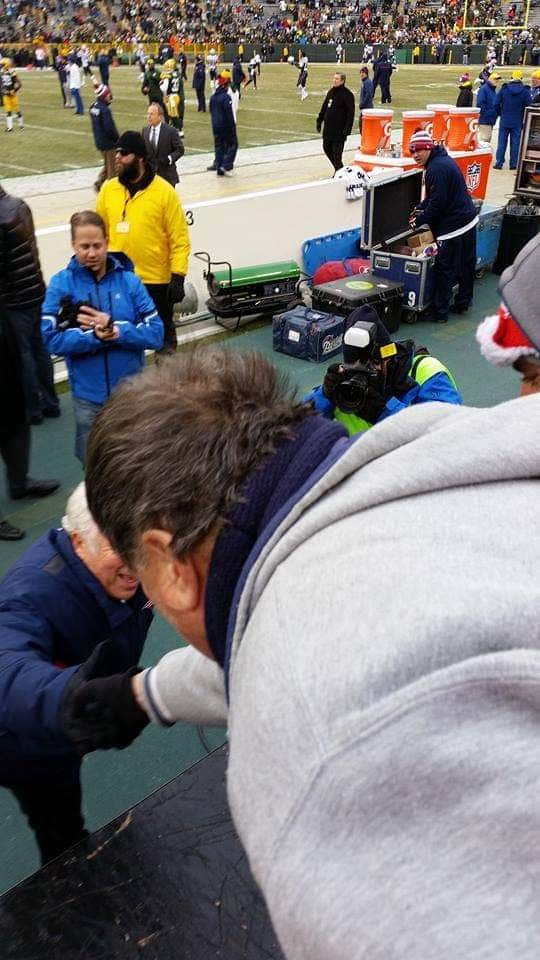 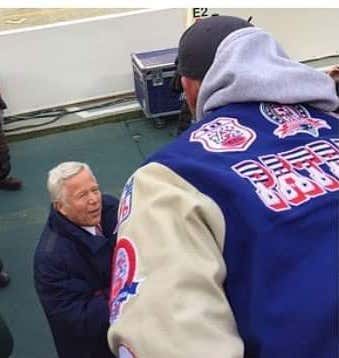 It was awesome that anytime Kraft would see Frank he recognized him immediately. I'm telling you, those shell-shocked '70's season ticket holders must have went through some shit! 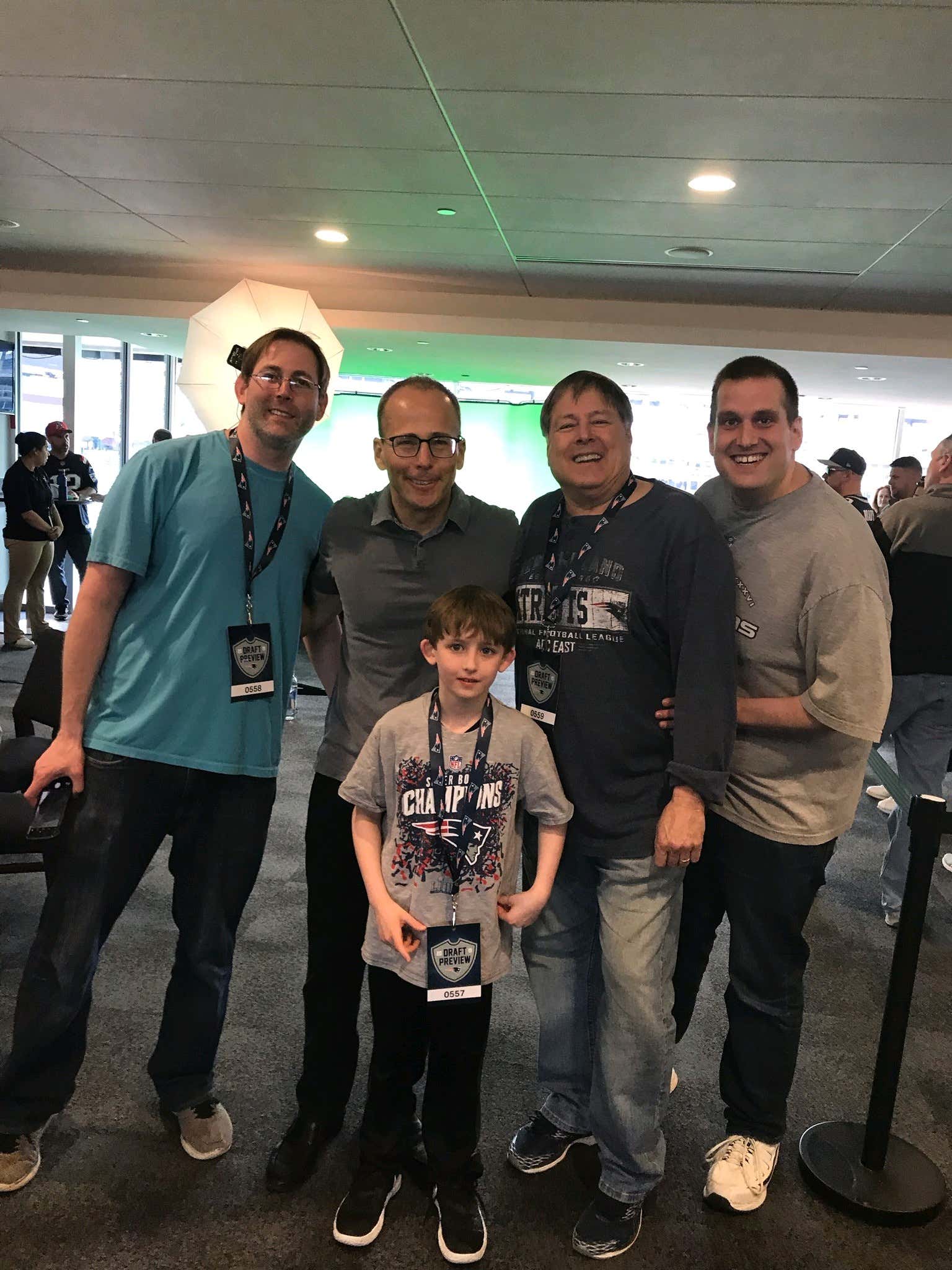 We had some amazing times and, of course, some incredible memories along the way as the one-in-a-million run the Patriots dynasty went on.

When we weren't celebrating a win, we were on text chats complaining about game plans (McDaniels) or execution. Never Belichick, Frank would have none of it. The guy was infallible in Frank's eyes. Nothing was ever his fault. My only gripe about the man, something he passed on to his sons, but one I still respected.

Bill always recognized Frank and treated him with the utmost respect and kindness. Everybody did, I think because Frank exuded the same towards everybody else he came across. And it was a lot of people. Not just in section 134 either. Walking anywhere in and around Gillette everybody knew and said hello to Frank. Running into Pats fans on the road he also got recognized.

He was an all-time fan, a great friend, and incredible person, dad, husband, grandpa.

I'd get updates from Mike and Scott on the regular and a few times when it seemed the worst, he'd end up bouncing back. He spent his 69th birthday in the hospital in a coma on March 26th. We had Gronk film a nice “ happy 69th birthday, get well soon, hype video” for him that the boys showed him when he woke up that he loved so much he cried. It seemed like he was turning a corner, “down 28-3 at halftime, and somehow pulling ahead” as Mike put it. It seemed like he was out of the woods when terrible news set in that infections had spread.

Frank passed away on the 11th.

It really really sucks thinking that his last moment at a Pats game was watching Tom Brady get pick-sixed by the Titans. It sucks even more that he wasn't able to see a single game last year because of COVID.

But, knowing Frank and his unextinguishable optimism, he would be quick to point out that he did get to see every game of Tom Brady's career that he played in Foxboro. He got to see his beloved team that once didn’t even have a field to play on, go from laughing stock of the league to 6 world championships, 11 AFC Championships, and the envy of all other pro sport’s franchises. And he got to make hundreds and hundreds of friends while doing so.

We will definitely have to do something at Gillette this season opener to honor him. I'm hoping, knowing what a class act organization that the Patriots are, that they will do something, too. Because I know I'm not going to be alone missing Frank at games. The guy was a legend in every sense of the word. 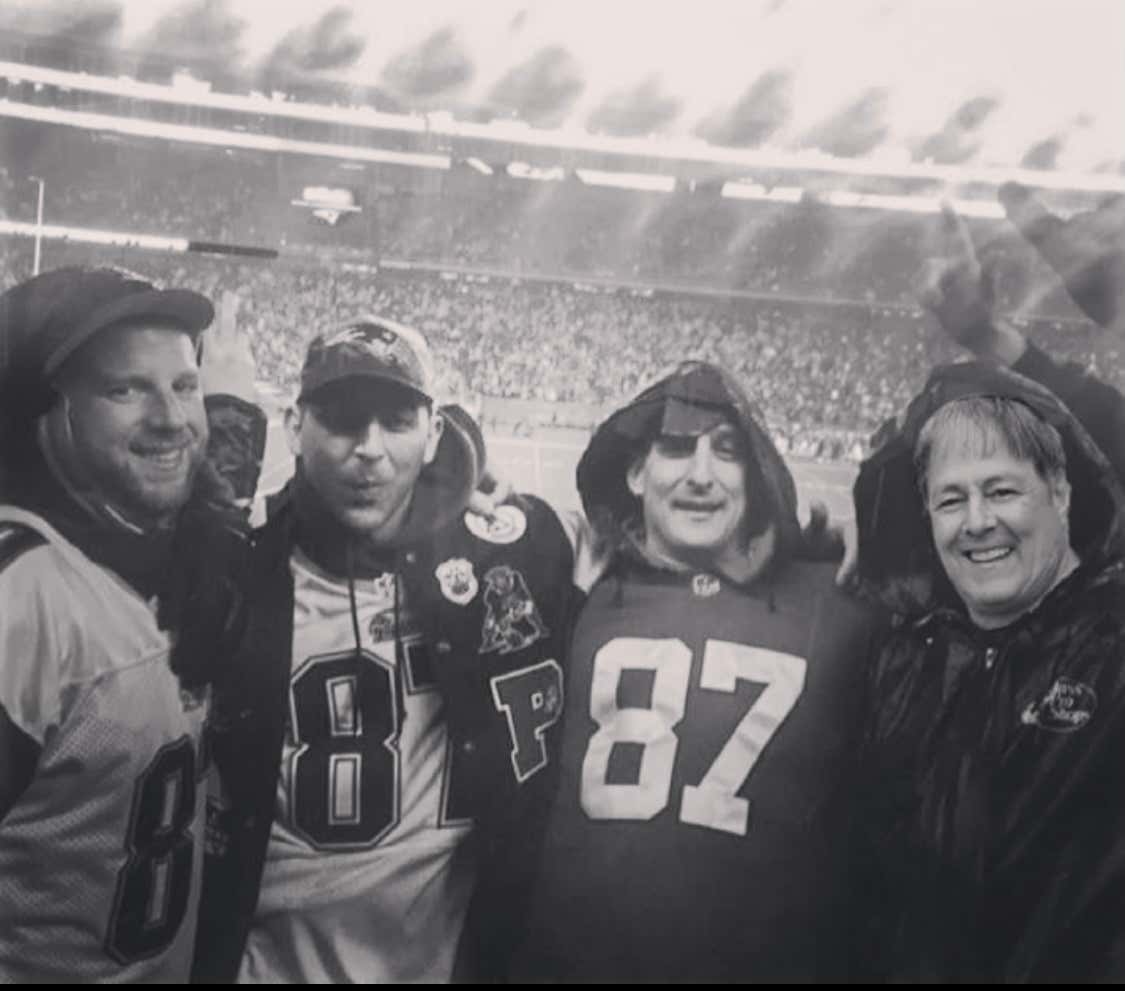