You really never know what you're going to see on the internet these days. You might see something amazing or something truly horrible depending where you look and what you stumble upon. I don't love titling something "This is the best thing you'll see today" but I really doubt you'll find something better for the duration of this Friday than this story.

Okay bear with me with this blog because I'm fairly new to crypto and all the slang that comes with it. A fella named Cobie with the Twitter handle @CryptoCobain and his co-host @ledgerstatus were scanning Twitch in part with their crypto currency show Up Only, which I believe is tied to the good folks over at Blockfolio who sponsor a whole ton of stuff here at Barstool. This isn't an ad for Blockfolio, but it might as well be with how awesome things turned out. So anyways these guys planned to raid someone's Twitch with all their followers and spread some wealth/audience. Remember when Big Cat did this sorta thing with that fantastic female painter during the pandemic? Same concept.

Cobie and his co-host Ledger went to the music area of Twitch and found a fella by the name of Cameron Ferguson who was performing live music to an audience of exactly zero people. Guy had 7 total followers when everyone hopped in and was just doing this for the love of music. All of a sudden hundreds of people started watching him play and were blown away with how good he was. Cobie guided Cameron through the chat to create a Twitter account (he actually didn't have one god bless his soul) and from there he got on Blockfolio and put his Ethtereum address in his bio so people could donate to him. Cobie threw in a few thousand bucks off the bat. Cameron continued to play music and stole the show.

Cameron had just joined Twitch like a few days ago. He was playing for no one. He easily could have stunk and they would have moved onto another stream in a matter of minutes. Nope, turns out this dude is an unknown superstar. Plays everything from Pink Floyd to Nirvana to The Eagles, The Beatles, Tom Petty and even some originals too. Everything was incredible. No exaggeration, he was a must listen. I didn't catch the stream live, but ended up listening to most of it skimming around afterwards. Five hours worth and it was that good. The donations began to pile in. Here's when he realized he had $17k in the account.

At the hour 38 min mark of the stream he brought his wife on the stream to break the news to her that they had upwards of $25,000 sitting in this account. 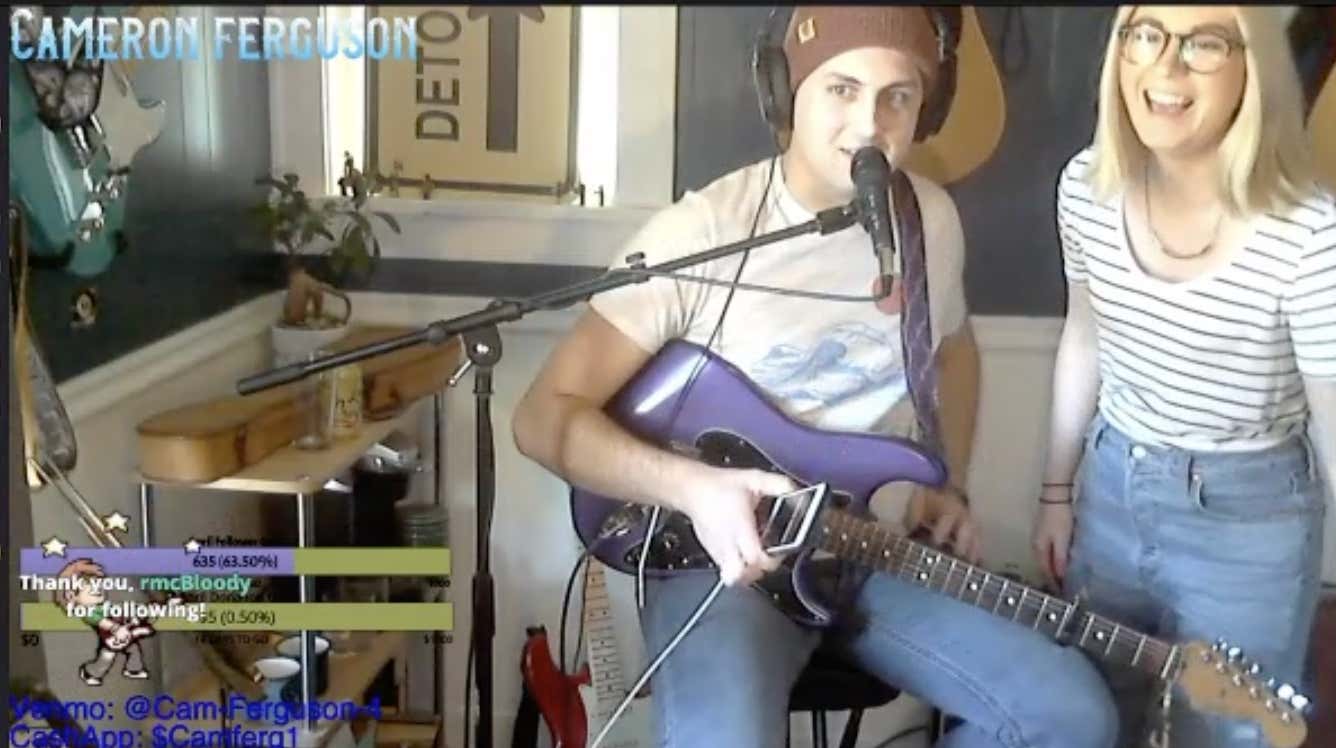 Of course she didn't believe a thing at first and I mean how could she? This whole crypto world is so hard to understand. He obviously kept playing and shredding for everyone in the audience. A billionaire named SBF eventually donated $10,000 of Dogecoin, which if you've noticed has gone up an insane amount in the past 24 hours.

What's hilarious about all this is Cameron thought at first he was being spammed and almost shut the whole stream off. He had seven followers when he woke up yesterday morning. Dude barely knew how to work Twitch. Didn't have a Twitter. Just was playing some music and singing some classics. Cameron teaches guitar lessons for some people and had to text them mid-stream that he had to cancel. He stayed on the stream without taking a break for nearly five hours and by the end of everything had racked up around $85,000. Just pure insanity. EIGHTY FIVE THOUSAND DOLLARS!!!

Hats off to this dude Cobie, that billionaire fella SBF, Blockfolio, (someone named @ledgerstatus as well who co-hosts Up Only as well that I missed originally) and everyone in the chat who kept sending Cameron money. The crypto community is A+ in my book. Just a genuine dude with a great talent who got a much needed break. Wouldn't be shocked if he gets signed to a label at some point. The internet is one crazy place. Oh yeah and there's no way he can have bad tweets uncovered from the past because he didn't even have a Twitter before yesterday!

P.S. I told my mom to invest in Dogecoin last summer. She listened. I took out my money a month later because the pandemic and I was poor. Her investment was at the price of .003 which is now .273. Yeah, I hate my life. At least I'm a great son.

P.P.S. I still don't know a thing about crypto or how it works but I do have 1/8th of a bitcoin thanks to Blockfolio and Oregon State's basketball team