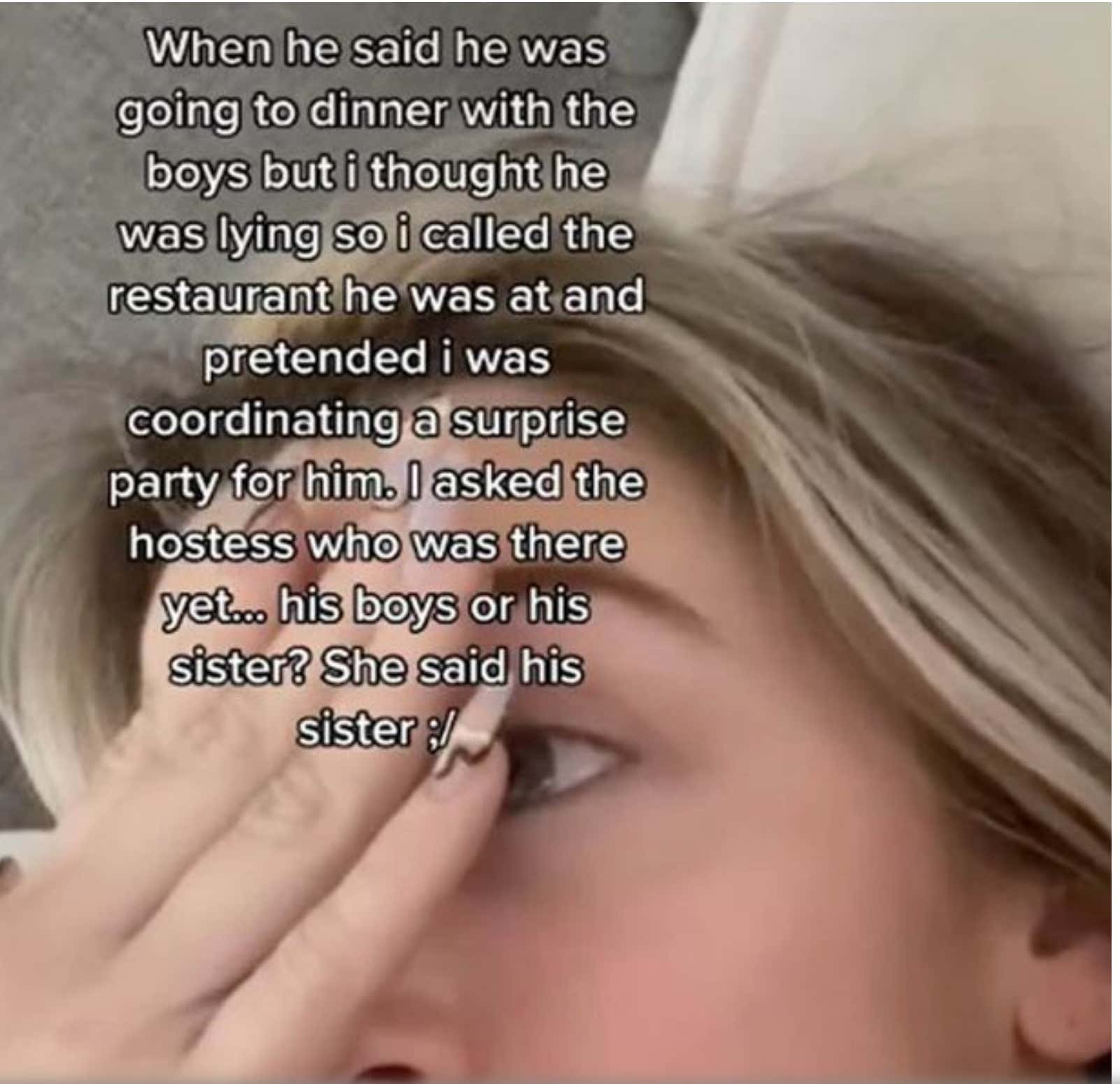 MIRROR - Restaurant staff unwittingly exposed an unfaithful boyfriend by letting it slip who he was enjoying his meal with.

Girlfriend Felicia Burzotta claimed she became suspicious ahead of the meal that he was seeing someone else behind her back.

It feels like just yesterday Feitelberg posted it: a video, some girl who was carefully manuvering her boyfriend’s arm and hand at an angle off the couch, struggling big time because it was all dead-weight — reason being, he was dead asleep; what she was doing was trying to get his thumbprint on his phone to open it up. Which she did instantly, obviously, before skipping off to put in what was no doubt nothing short of a Belichickean display of watching game tape.

Few moments have stuck with me like that one. Seriously I have like 4 memories, and that’s one of them. It’s the kind of crystal-clear HD your brain reserves for the moments that will shape your understanding of the world — in this case, an important fact that doubles as a crucial survival tip: never, under any circumstances, underestimate the determination and dedication of a girlfriend who suspects she is being fucked around on. The cunning, the shrewd savvy, the craftiness and creativity and high-level problem solving she can put on display when her mission is clearly defined.  That viral thumb video opened the floodgates and evolved from there, until it was about a month later, and an entire generation of young men had quit napping forever.

Now it's 2020, and the tactics may be different, but the guile is still very much the same.  Case in point, Tik Tok Felicia making headline news by exposing her douchebag boyfriend in like 5 minutes, after making a random third-party restaurant hostess serve as her narc without even knowing it,

All Felicia's Tik Toks about the thing are here — @Feliciaburzotta

…The woman took to TikTok to explain what happened - and it quickly went viral with more than 3.6 million views.

In it, she wrote: "When he said he was going to dinner with the boys but I thought he was lying so I called the restaurant he was at and I pretended I was coordinating a surprise party for him.

"I asked the hostess who was there yet…his boys or his sister? She said his sister."

To add insult to injury, Felicia said she found a fake eyelash in his bed the day after too.

You know when you're in trouble?

When the H word comes out.

In this context, the H word is the equivalent of her having 100 fully-focused close-up black and white pictures of you drilling your sister.

In another video, she explained that she had a "hunch" that he was cheating on her with another woman.

"She was everywhere, she was always around, you just couldn't get rid of her," she said.

"So anyway, I just had a feeling and I called the restaurant and said 'Hey, I really want to surprise my boyfriend for his birthday.

"'We're going to need a bigger table, I don't know who is there with though, is he with his sister or his friends.

"'The girl asked what he looked like and I described him and said what he was wearing.

"She said 'Oh I see him!, he's with his sister' and I was like oh which sister, is it the brunette sister or the blonde sister?

"Mind you, I'm looking for a blonde b****. And she affirmed that it was the blonde sister. So that's how I found out.'"

To make things worse, she was out of town visiting family in New York when she discovered the truth.

But once she returned, she travelled to his house and found a fake eyelash in the bed, which she knew wasn't hers as she had lash extensions.

I mean I'm telling you — this is light work. She even tried to up the difficulty settings by going to a different state and doing her spying remotely while with her parents, an objectively maximum-stress activity — didn't matter.  She solved the case in one quick phone call to a random hostess-turned-confidential-informant who was completely unaware she was witnessing one of the great wonders of the world: Suspicious Girlfriend, the Final Boss you never ever want to face in a relationship. Still undefeated.

Oh shit, almost forgot to include this — people would have killed me leaving a cliffhanger like that.

"Long story short, the couple is no longer together."