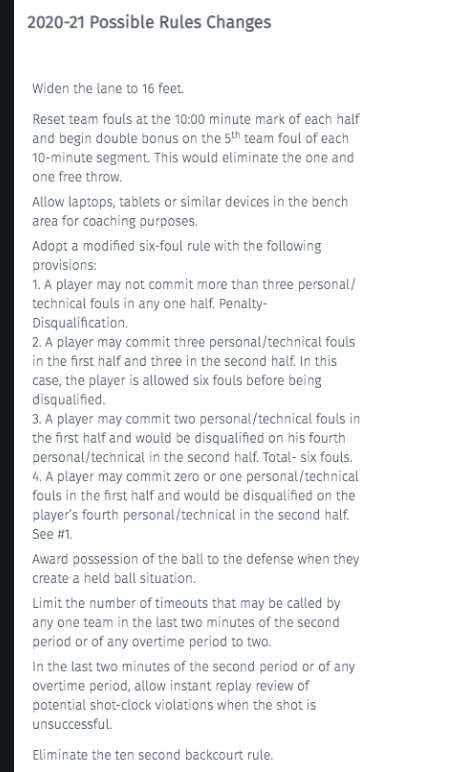 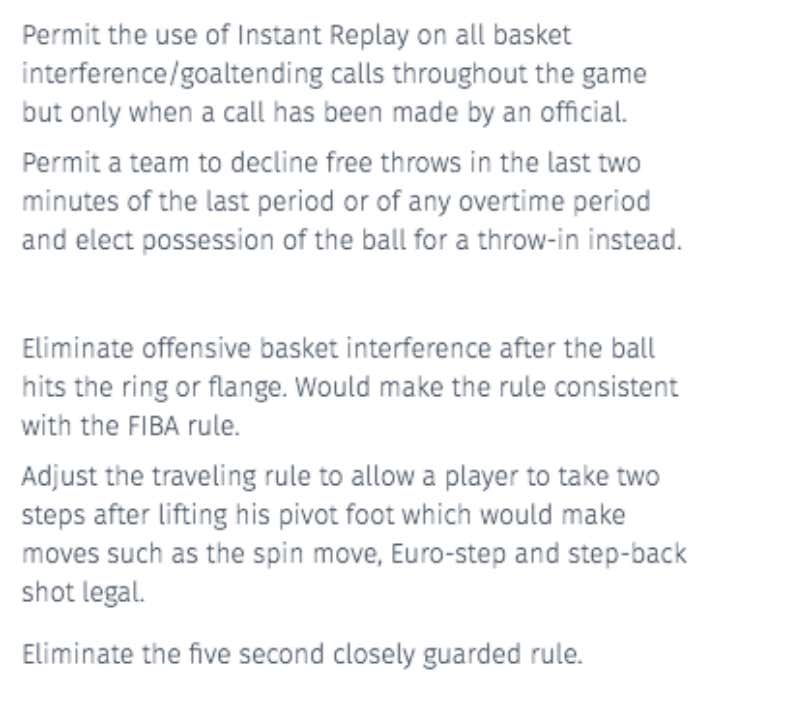 Alright, this isn't fake because Norlander wouldn't put something fake out there. That's not his style. But I swear some of these seem fake. For instance the 'adjust the traveling rule to allow a player to take two steps after lifting his pivot foot which would make moves such as the spin move, Euro-step and step-back shot legal.' Umm, what? Was the spin move illegal this entire time and just never called? There's zero percent chance refs get this one right regardless of what the rule is. Perhaps they could have worded it better. But all I can think about is how a spin move has been illegal based on this verbiage.

There is some good here, shockingly. Limiting timeouts? Yes. Please for the love of God, eliminate as many timeouts as possible. There are way too many. It's impossible to get any sort of game flow between the TV timeouts and number of timeouts each team has. Just let the guys make plays and let the game happen.

Six fouls? We're so close. I've been screaming that we should move to six fouls just because of how inconsistent the refs are and how many fouls they call. Nobody wants to watch the 9th guy off the bench play 15 minutes. We want to watch the best players, play. You still reward the team that gets fouled, obviously. But move it to six. Stop with all these provisions. Just make it six fouls so we don't get a bullshit charge call in the first 10 seconds of a game that changes everything.

Speaking of charges, can we fix this already? How is this one not listed? You ask any person who watches 1 college basketball game and that's the biggest  complaint. I've screamed it for years. Get rid of the charge when the weakside defender is sliding over. It's called wrong 80% of the time. Make a play on the ball. Stop rewarding guys for just falling down. I'm not talking anyone on the ball or letting a guy on offense lower his shoulder or push off. I'm talking about the play where there's a drive, guy starts to go up for a layup and a defender slides in. That needs to be gone now.

The right to refuse free throws is … bizarre. I don't like that one. I get the idea behind it where you can waste more time with an inbound, get the ball to a better shooter, whatever. But that would take a lot of convincing for me to get behind it. There's strategy involved here with fouling. I like that.

I understand there are contract deals in place for TV timeouts, but why can't we adjust those and just go to 4 quarters? Resetting the fouls? Awesome. Need it. Stop putting teams in the bonus with 13 minutes to go. But every other level of basketball plays 4 quarters except men's college basketball. Just work on the contracts to make it work and go 4 quarters. That's the solution here. Pretty simple.

Someone explain to me why there isn't a replay limit rule in place? This would be the 2nd or 3rd thing I'd change right away. Replays last too long. Make it simple. You get 30 seconds or 60 seconds max to make a change. If you don't see something in that amount of time, the call on the floor stands. It also limits how long teams can go get a free timeout huddle. Personally I'd go 30 seconds. If it's a clear wrong call, you can fix it in that amount of time. Seems basic but for some reason this isn't on the list. Who do I need to pester to fix this?

Eliminating the 5 second rule doesn't bother me. That's whatever. Eliminating the 10 second rule? That's dumb. What the rule should be instead is you have 10 seconds total to get the ball over halfcourt. We saw this come up in the Cuse/WVU game late for Cuse. They took 15+ seconds to advance the ball because they were calling timeouts and had a jump ball. Don't reward offenses for that. If there's not a defensive foul, the clock doesn't reset. Just 10 seconds total to get the ball over.