Close your eyes and pretend I said the word TikTok. What do you picture? Is it Dave? Is it drama? Is it Alex Cooper? Perhaps. But it's also this. Two dudes with mullets, Scott Drew, Baylor's AD and Baylor's President with Jared Butler putting on a dancing clinic. Actually, I don't know about the others. My eyes were fixated on Scott Drew. If this took place at the parade he'd go down in the same breath as Mark Madsen

Just the perfect execution mix of dad, old man and classic white guy dancing out of Drew here. The classic look over mid-dance to make sure you're doing it right is perfect. That's your weird, drunk uncle at the wedding during the electric slide. 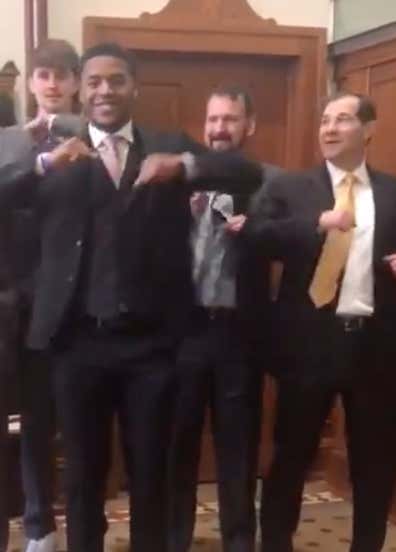 'Totally nailed it. Fuck yeah, Scott. This is going to kill in recruiting.' - Scott Drew, probably. I love that he never loses eye contact after that too. Just completely following Jared Butler with the hip shimmy.

At the same time you might notice two large mullets in the background. The Mullet Brothers - Matthew Mayer and Jackson Moffatt. Needless to say they were stars 2 and 3 of the dance here. But these mullets are too glorious not to be the highlight of the parade:

Drew Timme can have his mustache, the mullet is dominating college basketball. You know those guys were just hammering some Lone Stars and Shiner Bocks last night. No doubt in my mind they had a lipper in at some point in the parade too. Those are my kinda guys. I want nothing more than to grow hair, turn it into a mullet and hang out with Mayer and Moffatt.

The scenes from the parade were fucking wild. Have a day, Waco. Have a day.