FOX 5 - A former sheriff’s dispatcher in a suburb of New Orleans has been arrested, accused of refusing to return more than $1.2 million that had been accidentally deposited into her brokerage account, authorities said.

Kelyn Spadoni, 33, was taken into custody Wednesday on charges of theft valued over $25,000, bank fraud and illegal transmission of monetary funds, nola.com and WVUE-TV reported. The reports said she was fired by the Jefferson Parish Sheriff’s Office after her arrest.

Spadoni is being held at the Jefferson Parish Correctional Center on a $50,000 bond. It was unknown if she has an attorney who could speak on her behalf.

Spadoni is accused of immediately moving the funds to another account and using some of the money to buy a new car and a house, authorities said.

Authorities said a clerical error had caused Charles Schwab, a major financial services corporation, to deposit more than $1.2 million into her brokerage account when it only meant to transfer about $82 in February, nola.com reported. When the bank attempted to reclaim the money, the request was rejected because the money was not available, according to the sheriff’s office.

In my 8 years of blogging at Barstool Sports, I think I have 2 pretty straight and narrow views that I've never wavered from: 1) Stanley Cup champion Tom Wilson didn't do it, and 2) Free money is free money, no takesie backsies. So I stand firmly with Ms. Kelyn Spadoni in this situation. She noticed a bank error in her favor and she took advantage of it. Where I come from that's called "finder's keepers", and the bank in this situation is the weeping loser.

What I love is she figured it was an absolute free roll. She was only supposed to get $82. So when $1.2 MILLION hits your account, you have to move QUICK. You have to get that money out, buy everything you can, and be like "whoops, sorry, money's not here, try a different house". And that's exactly what she did, buying a house and a car before they came hunting for the money. So technically, she doesn't even have the money anymore, so they can't take it back. She wins!

When it comes down to it, Monopoly rules should preside over all. If you have a Get Out Of Jail Free card, you get to use it. You get $200 every time you do 1 lap around the block, and if you get a bank error in your favor, you get to keep it. I don't care if it's $200 or $1.2 million, rules are rules. 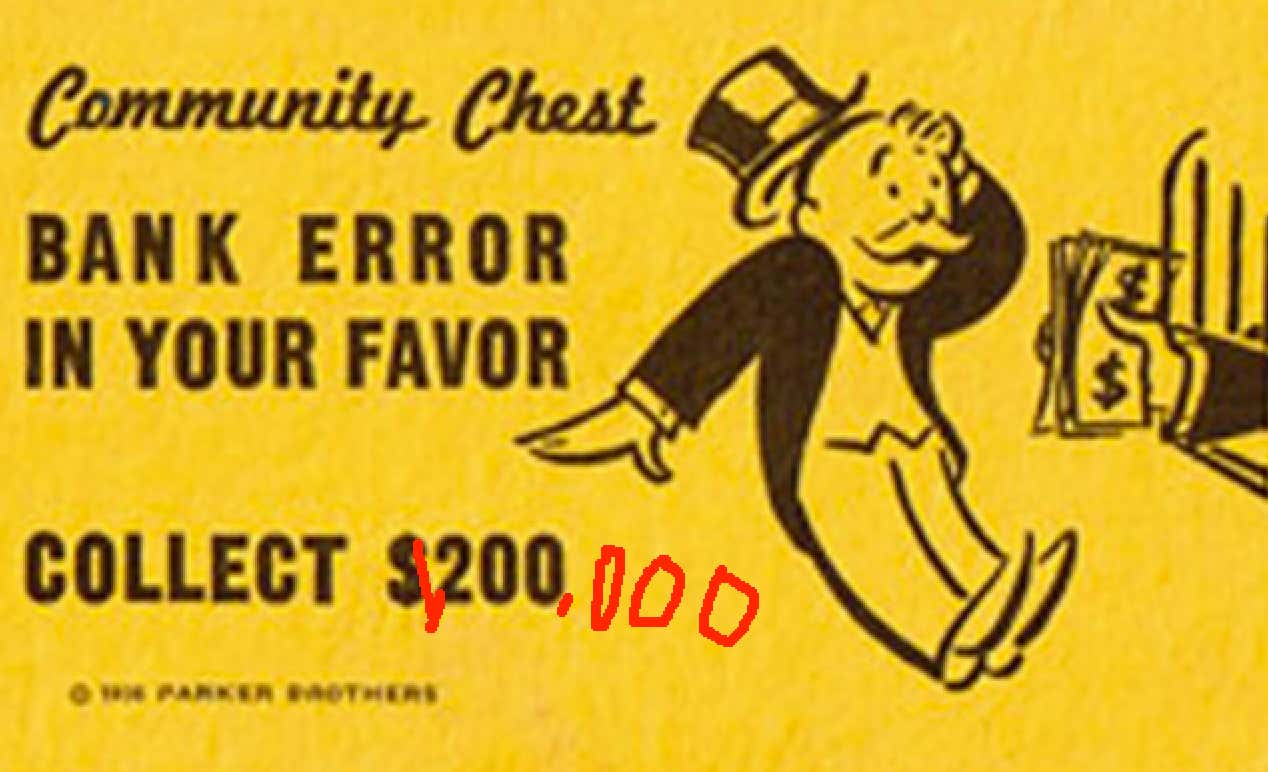