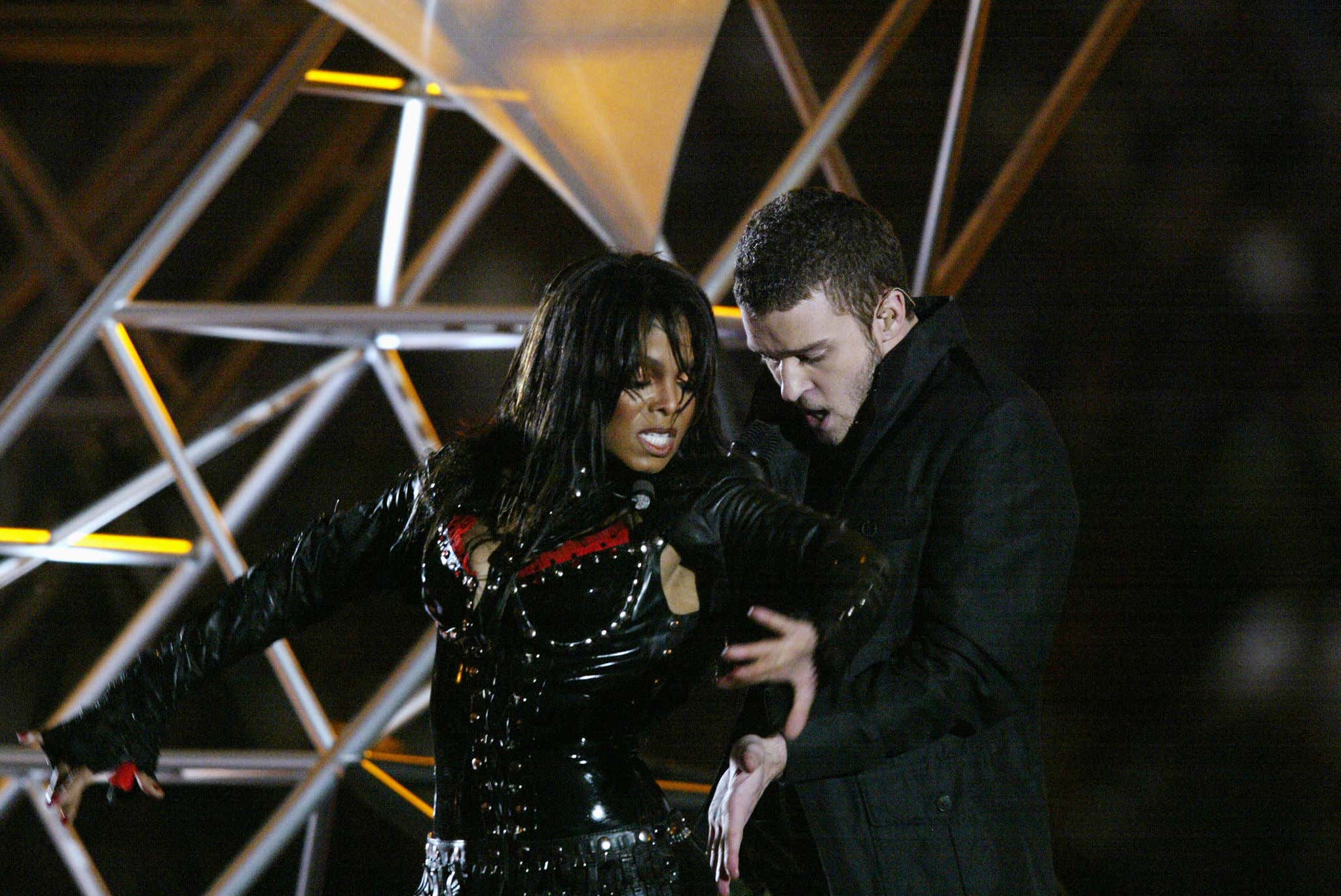 I'm not usually one to celebrate my own accomplishments. I prefer to leave that to others. But just to save everybody else the effort, congratulations are in order to me for authoring the most mid-2000s headline ever written. It should be saved to a thumb drive and sealed in a time capsule for future generations so they will know what the world was like in 2005 and how it was reflected in our time. (And since by the time the capsule is open, we'll probably be back to writing on parchment with quill pens, you might want to print off a hard copy as well.) And believe me, it wasn't easy; if everyone could squeeze five past their prime pop stars into a single non-runon sentence, everybody would. Just know I vow to use this power only to do good.

With that out of the way, you might have caught it a couple of months ago when Justin Timberlake apologized not only to Britney Spears for kind of being a dink after they split up, but to Janet (Miss Jackson, if you're nasty) for the Super Bowl bewb flash, in kind of a remarkable double combo apology. Like sinking two billiard balls with one shot.

At the time he issued the double apology, it seemed peculiar. Like Timberlake was drawing a through-line between two completely unrelated events. But according to someone who claims to know, they were very much related. In a cause-and-effect way.

As in here was the cause (see the camera cut to JT just as Britney and Madonna kiss at about the 3:55 mark:

Which apparently directly resulted in the historic nipple reveal at Super Bowl XXXIX.

Source -  The stylist who prepped Janet Jackson’s look for her infamous 2004 Super Bowl appearance with Justin Timberlake tells Page Six that Timberlake pushed for the “wardrobe malfunction” in an attempt to outdo Britney Spears, Madonna and Christina Aguilera, who had wowed the world months earlier by scandalously kissing at the MTV Video Music Awards.

Superstylist Wayne Scot Lukas told us that Timberlake “insisted on doing something bigger than their performance. He wanted a reveal.” …

Of course, in the end Timberlake tore off part of her top at the end of their performance, briefly revealing Jackson’s breast. Timberlake famously labeled the incident a “wardrobe malfunction.”

“I wouldn’t call it a wardrobe ‘malfunction’ in a million years. It was the most functioning wardrobe in history. As a stylist, it did what it was intended to do,” he said.

Now to be fair, sources close to Timberlake are denying this version of events. But who are you going to believe? Yes, Timberlake is a superstar, but Wayne Scot Lukas is a superstylist. And even the regular, garden variety stylists know where all the bodies are buried. They get more inside, behind the scenes dirt than anyone. Talking to them is the equivalent of detectives in a 70s cop show going into a strip club to get the word on the street. They never steer you wrong.

And all this proves that fame is indeed, a fickle mistress. JT of 2005 was king of the world. Master of all he surveyed. No one perhaps say, Leonardo DiCaprio or Derek Jeter was pulling the kind of talent he was. Even in their mighty company, Timerlake might have been the top of the celebrity sex food chain. And yet, here he was at the MTV Awards making sad puppy eyes at Britney for getting all the attention. In that moment, he was just another face in the crowd. Another nobody in the audience. An asteriod caught in the gravitational pull of her bright, glowing sun. Like a high school loser watching the Homecoming Queen holding court and wondering how he could get her attention. And shoving Janet Jackson's right aerola into the collective face of nuclear families across America was the best he could come up with. It just goes to show that no matter how huge a star you are, we are all still human beings. Flawed. Needy. Petty. And craving love and attention.

So as a result, we've forever been subjected to carefully monitored, safely tape-delayed Super Bowl halftimes, so that no star ever tries to work out their own issues in front of us and corrupts our youth ever again. With the exception of Pete Townsend's pasty, liver-spotted belly flab hanging over his belt, the NFL has kept us safe from overexposed celebrity skin while we wait for kickoff of the second half. All thanks to Justin Timberlake's neediness and insecurity. It's both sad and oddly comforting. It's good to know that even the biggest megastar in the world, a guy who had all the great women, whose every recording went platinum and was part of some of the best content SNL put out in the last 25 years, was still capable of being a petulant, jealous child, just like any of the rest of us slobs would've been.

P.S. Not exactly related to this, but a fun fact nevertheless. The great lasting, cultural advancement inspired by the intentional nipple slip isn't the introduction of the phrase "wardrobe malfunction." It's that some tech people noticed that the next day, " halftime show" or "Janet Jackson's boob" or some variations of it was shattering the records for Google searches. So they were inspired to start a website where people could view and upload videos. A little start up that became somewhat successful you might have heard of called YouTube. Now we can't picture life without it. If it wasn't for Timberlakes emotional issues, we still might not have it. History is made in such ways.