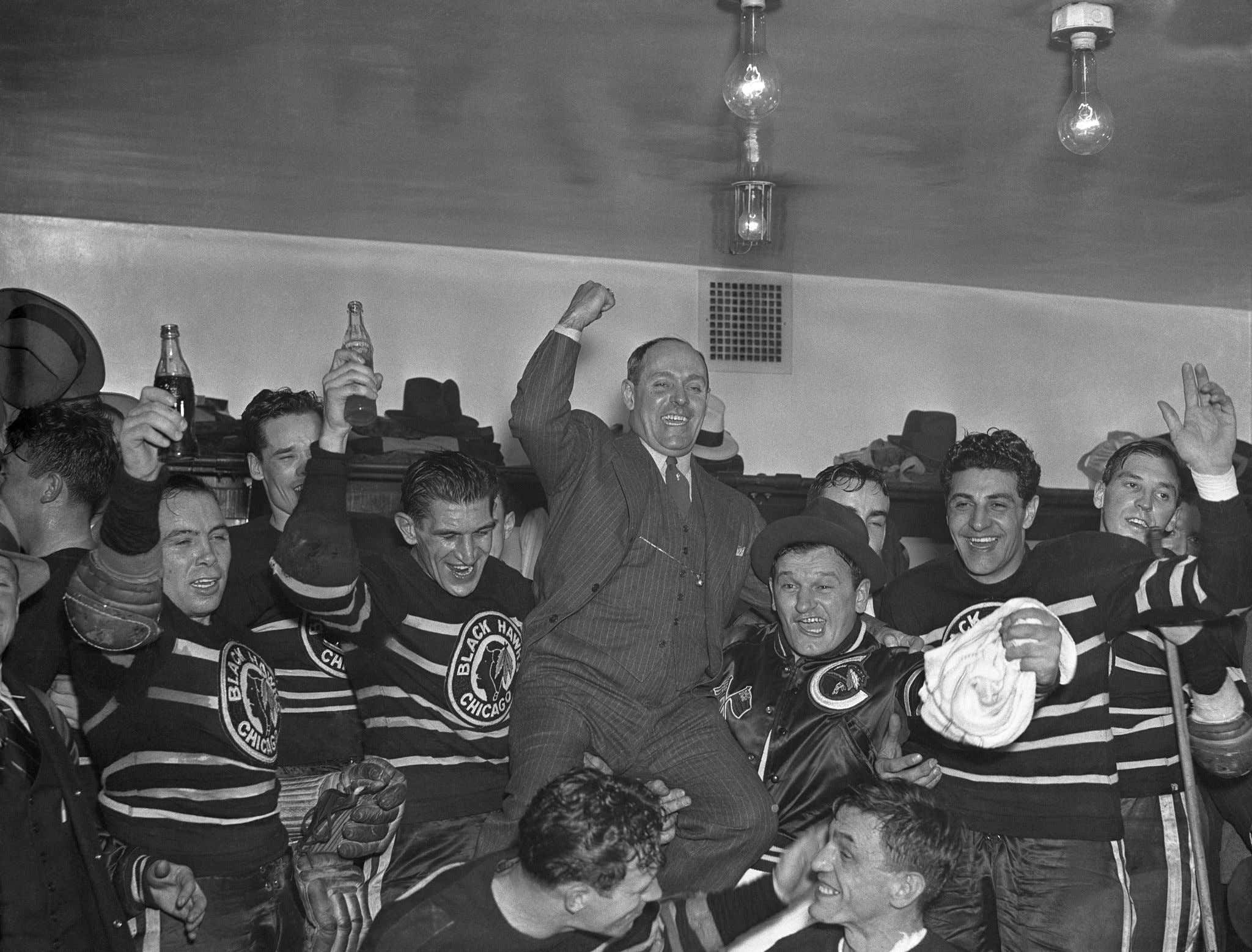 The Chicago Black Hawks become the most improbable Stanley Cup Champions, beating the Toronto Maple Leafs 4-1 at Chicago Stadium to win the best-of-five series in four games. The Black Hawks, coached by Bill Stewart, made the playoffs despite an awful record of 14-25-9, the worst record for any team winning a championship in any of the four major sports. It was the second cup won by Chicago, who had a record eight American-born players.

After winning the Stanley Cup in 1934, the Chicago Black Hawks hit the skids, finishing last in the American Division in the 1936/37 season with a record of 14-27-7. They were not much better in 1937/38 under new coach Bill Stewart, posting a record of 14-25-9. However, they finished two points ahead of the Detroit Red Wings in the American Division for the third and final playoff spot. The Black Hawks statistics were even worse, as they were the lowest-scoring team in the NHL with 97 goals, while they allowed 139 goals, ranking seventh among the eight NHL teams. The Black Hawks played .500 at home with a 10-10-4 record at Chicago Stadium, while on the road, they were a horrendous 4-15-5.

In the quarterfinals, the Chicago Black Hawks faced the Montreal Canadiens, who finished third in the Canadian Division. After losing the opener in Montreal 6-4, the Black Hawks got a stellar effort in goal from Mike Karakas, who backstopped a 4-0 win to even the best-of-three series. In Game 3, at the Montreal Forum, the Black Hawks tied the game late on a goal by Earl Seibert and won in overtime 2-1 with Paul Thompson scoring the game-winner at 11:49. The Black Hawks would face the New York Americans in the semifinals. The Americans won the opener at Madison Square Garden 3-1. They appeared to be on the verge of elimination in Game 2 at Chicago Stadium when Nels Stewart broke a scoreless tie in the waning seconds of the third period. However, referee Clarence Campbell disallowed the goal saying Eddie Wiseman had interfered with Goalie Mike Karakas. The game would go into sudden death, with Chicago winning 1-0 on Cully Dahlstrom's goal at 13:01 of double overtime. The Americans held a 1-0 lead in the decisive third game, but with goals from Seibert and Alex Levinsky late in the second period, the Hawks rallied to take the lead. In the third period, Doc Romnes added a goal sending the Cinderella Black Hawks to the Stanley Cup Finals with a 3-2 win.

The Chicago Black Hawks would meet the Toronto Maple Leafs, coached by Conn Smythe, with the Stanley Cup on the line. When the finals started, they were without Goalie Mike Karakas, who suffered a foot injury. Using Alfie Moore, a journeyman minor leaguer, the Black Hawks stunned Toronto at Maple Leaf Gardens, with a 3-1 win in Game 1, thanks to two goals from Johnny Gottselig. Moore, who was a backup for the Americans, was located in a nearby tavern by Gottselig and played the game drunk. After the game, it was ruled that Moore was ineligible to play but allowed Chicago’s win to stand. He was given $300 and a gold watch for his Game 1 efforts. With Paul Goodman in goal for Game 2, the Black Hawks were soundly beaten 5-1. As the series shifted to Chicago, Mike Karakas wearing a special steel-toed skate, returned to the ice for Game 3. The Maple Leafs scored an early goal as Syl Apps scored on the power play 95 seconds into the game. Karakas was perfect the rest of the way, as the Hawks rallied to win 2-1 on goals by Carl Voss and Doc Romnes. Even though the Black Hawks held a 2-1 series lead and were one win away from a championship, the Stanley Cup was not in the building for Game 4. League President Frank Calder did not believe the Black Hawks could actually win the Stanley Cup, so he ordered to have the trophy ready for Game 5 back in Toronto. The two teams traded goals in the first period, as Chicago,o as they did against the Americans, took control of the game in the second period with goals by Carl Voss and Jack Shill. In the third period, the Black Hawks sealed their unlikely championship with a goal by Mush March.

Nobody could believe that the Chicago Black Hawks had won the Stanley Cup after having such a bad regular season. Not even players on the team could have expected them to win the Stanley Cup, as Roger Jenkins told his Mike Karakas he would push him around Chicago in a wheelbarrow if they won. A few days after winning the Stanley Cup, Jenkins made good on the bet as fans lined State Street to watch and cheer them on. The Black Hawks would follow up their championship by finishing dead last with a record of 12-28-8. They would not win the Stanley Cup again for 23 years.