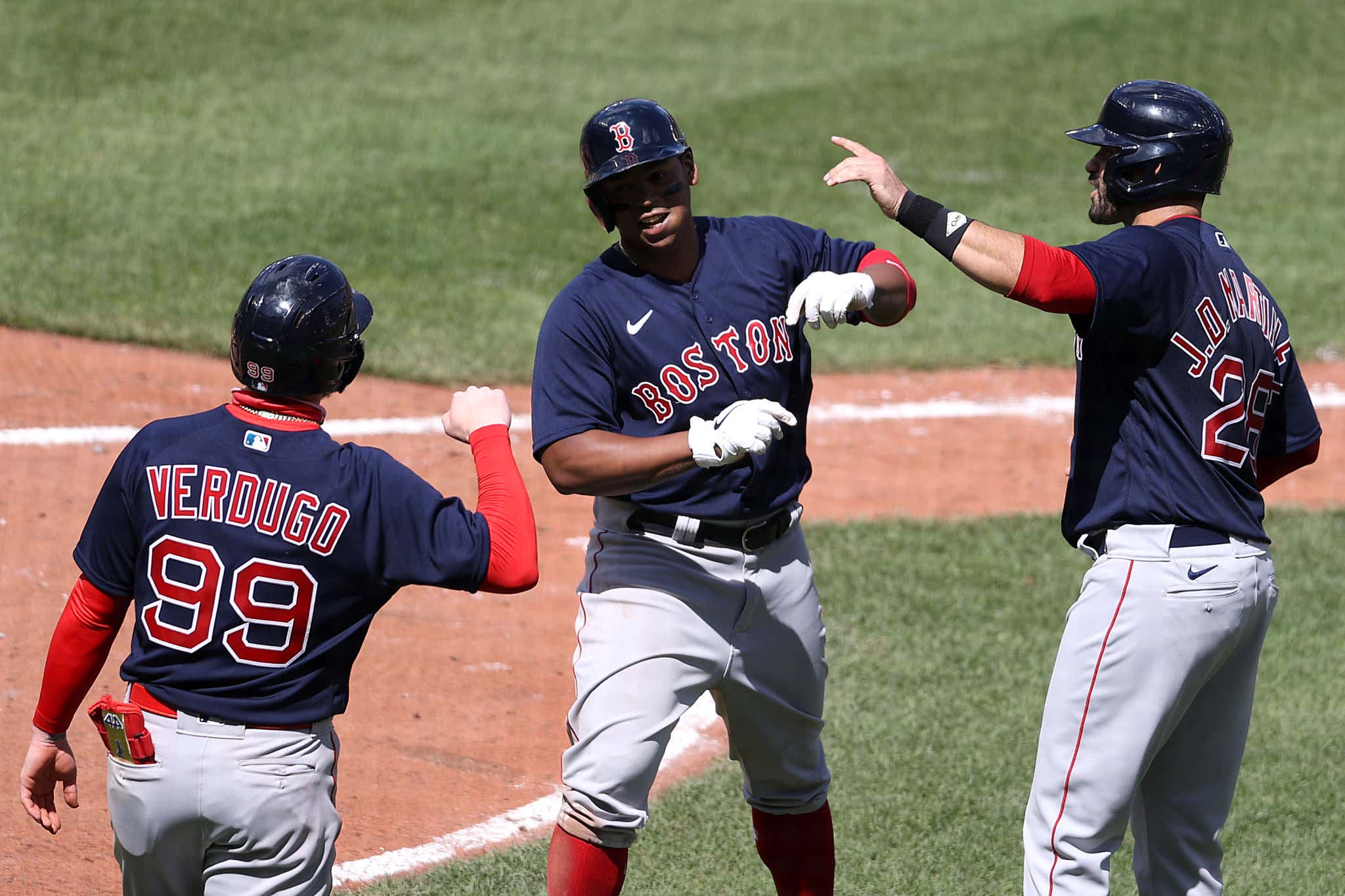 Sunday, April 11, 2021 will forever be known as the JD Martinez Sniffles Game.

Yesterday, we got some pretty unsettling news that Martinez had been placed on the Covid list and that he'd be out of the lineup on Saturday. Basically what happened was that JD had a cold, came into the clubhouse to ask for something to make him feel better, and then the Covid alarms went off. Boston's hottest hitter got taken out of the clubhouse and would not be allowed to return until he could test negative. After testing negative, he was allowed to rejoin the Red Sox on Sunday, and then casually went 4-for-6 with three home runs, 4 RBI and 4 runs scored. He's now hitting .472 with a 1.583 OPS like a sick bastard.

Pretty much in every single game this season, there's been a "here's what JD did tonight" segment of the blog and it's certainly been well deserved. But being that the Red Sox have reached double digit hits in their last six straight games and recorded a season-high 17 hits in their victory on Sunday, we've gotta pass the shine around. Rafael Devers, who notoriously starts off cold every year, is not so cold anymore. After homering in the first two games of this series, Devers homered twice on Sunday and drove in five runs. He was one of five Red Sox hitters who had a multi-hit game in the series finale.

Alex Verdugo had a pair of hits and homered, Kiké Hernandez had two hits after hitting in to some real tough outs recently, and Xander Bogaerts had a three-hit game which is already his third game with three hits or more through his first eight games. As a team, the Red Sox are hitting .332, while averaging 8.8 runs per game over their six-game winning streak. The Red Sox are good. I'm sorry if that bothers you, but it's true and I told you that they would be. A few more wins in a row, and I'm not sure they'll be so sneaky good anymore. Just good. You'll know it. Your mom will know it. Everyone will know it.

Nick Pivetta was very solid in this one, going six innings with seven strikeouts. His line kind of got skewed at the end there after he gave up a three-run bomb on a hanger in his final inning of work, but had been doing a fine job all day before that. One mistake pitch, really. I wrote it in the season preview blog highlighting the rotation -- Pivetta is going to be an X-factor for these starting pitchers. The guy has done nothing but pitch well and get wins since he came over last summer. Red Sox starters have had an ERA of about three and a half during their winning streak, and it's exciting to know that at some point…they're getting Chris Sale back.

Games like these, ones where you get out to 10-1 leads, you get to see some relievers that you wouldn't want anywhere near a mound in a close game. The fact that Matt Barnes had to get hot in this contest, albeit not needing to be brought in, is fucking asinine. The high leverage guys in that Red Sox bullpen? My confidence in them is strong to quite strong. Beyond those two (maybe three) guys? It's a lot of ehhh and a lot of hell no. If the Red Sox continue to win, I'm going to need Chaim to get on the phone and bring in some more relief help. But that's a discussion for another day. For now, it's about the first place, hottest team in baseball Boston Red Sox.

The Red Sox pain train now rolls into Minnesota to take on a very good Twins team. In the series opener, we'll see Martin Perez versus JA Happ, a lefty that the Red Sox are very familiar with as he spent the last five seasons in the AL East with Toronto and New York. In Happ's first start of the season, he needed 89 pitches to get through four innings against the Tigers, but still held them to one run on three hits with four strikeouts. The first Perez Day of 2021 resulted in a win for Boston with the left-hander yielding three earned over five innings against the Rays.