Source - Lil Nas X was not kidding when he said he's been prepping for the release of his "Montero (Call Me By Your Name)" single for nine months. In addition to the song launching at No. 1 on the Billboard Hot 100 songs chart for the week ending April 4, it now has its own free rhythm game that will have you shaking the rapper's spandex-clad bottom for points and bragging rights.

"Twerk Hero" dropped on Wednesday (April 7) and in keeping with Nas X's cheeky "did I do that?" sense of humor, the gratis browser game challenges players to drop it low, high, to the right and to the left to knock out flaming arrows as the song plays in the background.

I'll tell you what, Lil Nas X better hope there's not a hell because if there is he's going there. No if's an's or but's about it. The man is literally dancing with the devil every chance he gets and I, for one, love it. He even had his ball bag poking out of the bottom of his briefs just to add insult to injury... 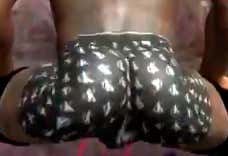 The game itself actually seems kinda fun. There are no levels or storylines, it's just him twerking- that's it. Which I'm sure will upset the same people that got upset over his music video a couple weeks ago but hey, that's the sign of a good artist. Its crazy to think that he's only twenty-two years old too. Think about what you were doing at that age? Smoking week with your buddies? Drinking a beer after your shift at the DPW? This guy is a multi-platinum selling cultural icon and he's only just getting started. Insane. You can the game here if you want. Happy birthday, Nas. Can't wait to have you on Out & About…