“Collier allegedly sent a text message to the victim with a fraudulent government record attached. The document was a fraudulent marriage annulment,” said Sgt. Barkley.

On Tuesday, an Amarillo woman named Cecily Steinmetz posted to Facebook saying she was engaged to Collier before she learned he was married. Steinmetz’s original post has gone viral —shared tens of thousands of times, even internationally. 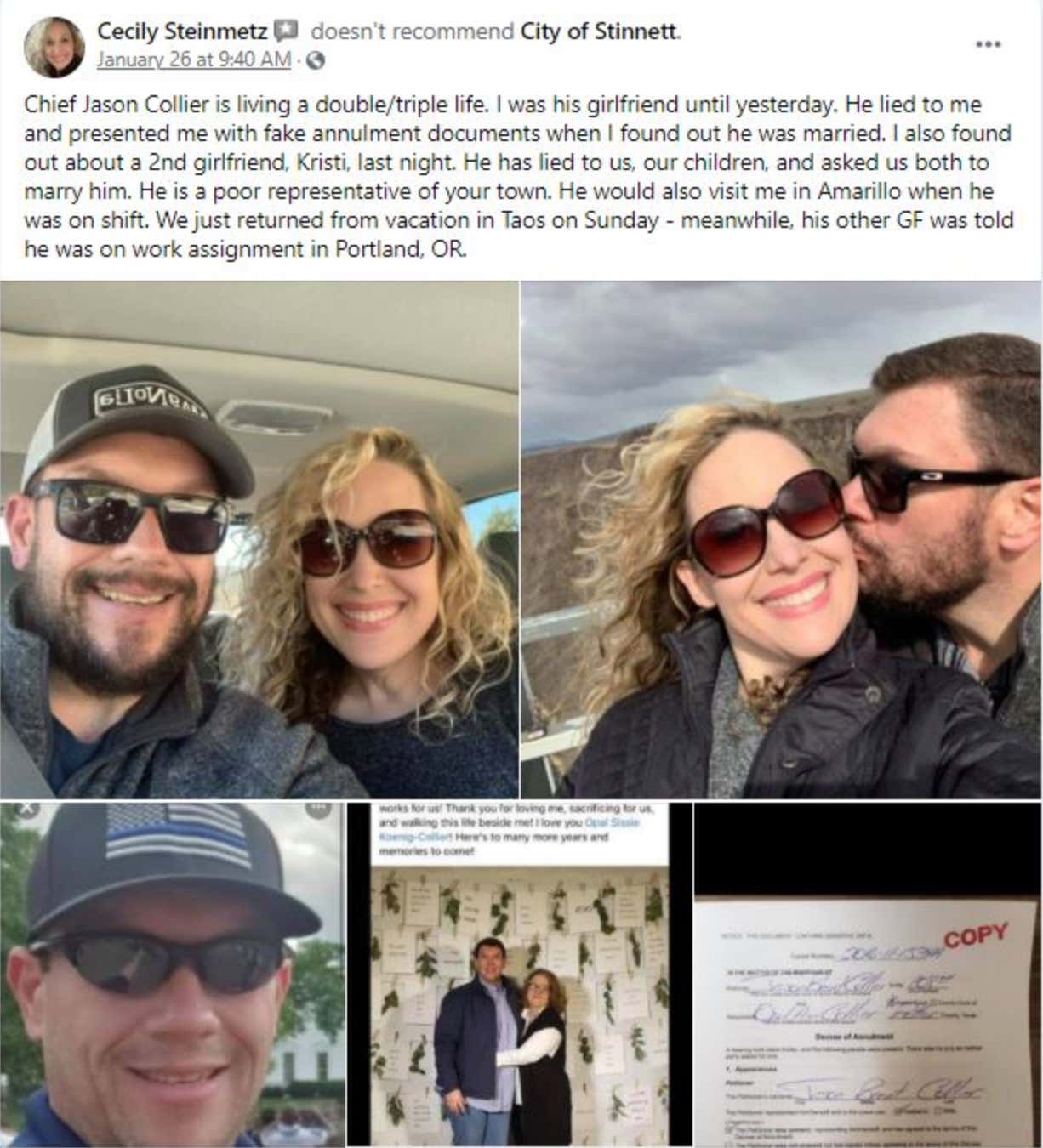 “…he was like, ‘Well, you know, I’ll get you the annulment,’ and he’s like, ‘Just hold on.’ I was like, ‘Okay, you know, let me see it then,’ and he sent that to me. And I told him, I said, ‘Well, I’m not going to take this at face value, I’m going to check it out with Potter County,’” Steinmetz said. “I did not think it was right in his position to be presenting people with a false document like that.”

“No match exists either under that name or cause number. Our cause numbers are completely different, consisting of a 0 followed by 6 numbers, starting in 7 or 8,” Judge Woodburn said via text message on Thursday. “My court is followed by the letter E. It’s a fake.”

When asked what she hoped to accomplish by posting about Collier, Steinmetz said she wanted to raise awareness locally and for Collier to be held accountable.

“I would just hope that he has learned his lesson, not to deceive people like that. I was also apt to believe him about everything due to his position. I mean, I would think that that would be a very upstanding person, and a very honest person. And that is how he presented himself. And I would just hope that this doesn’t happen to any other women in the future. Just the lies and promising things that are never going to happen. There’s just no reason to drag people and their children into that,” Steinmetz added.

First off, is that McNulty from The Wire?

Second off, Ok, Cecily. Whatever you say hun.

You know how girls always love to yell at guys for "not listening"?

"You're listening, but you're not hearing me"

And you bite your tongue so hard you feel like that singer from Game Of Thrones that fucked with Joffrey.

Well this is just another black and white, textbook, perhaps THE most textbook, example ever of the reason people in glass houses shouldn't throw stones.

No offense to my man Jason Collier here, but there is absolutely 0.00000000% chance he was slick enough to never get caught up in a web of his own lies with one of these women prior to Cecily going scorched Earth on the facebook here. Negative infinity chance.

No man could juggle 20 women and keep their story straight 24/7. Nevermind remembering what each one of their names are.

If one of these women were actually LISTENING or paying attention whatsoever, they would have noticed one of Collier's slip-ups or gaffs. But nope. Too busy living in their own head, worrying about themselves, and wondering which places they could not mention they wanted to eat at later on that night when asked to decide.

Thought Nova- The whole thing broke down when Kristi Shaffer saw a picture of Collier and Steinmetz. She commented, and the two ladies put two and two together. 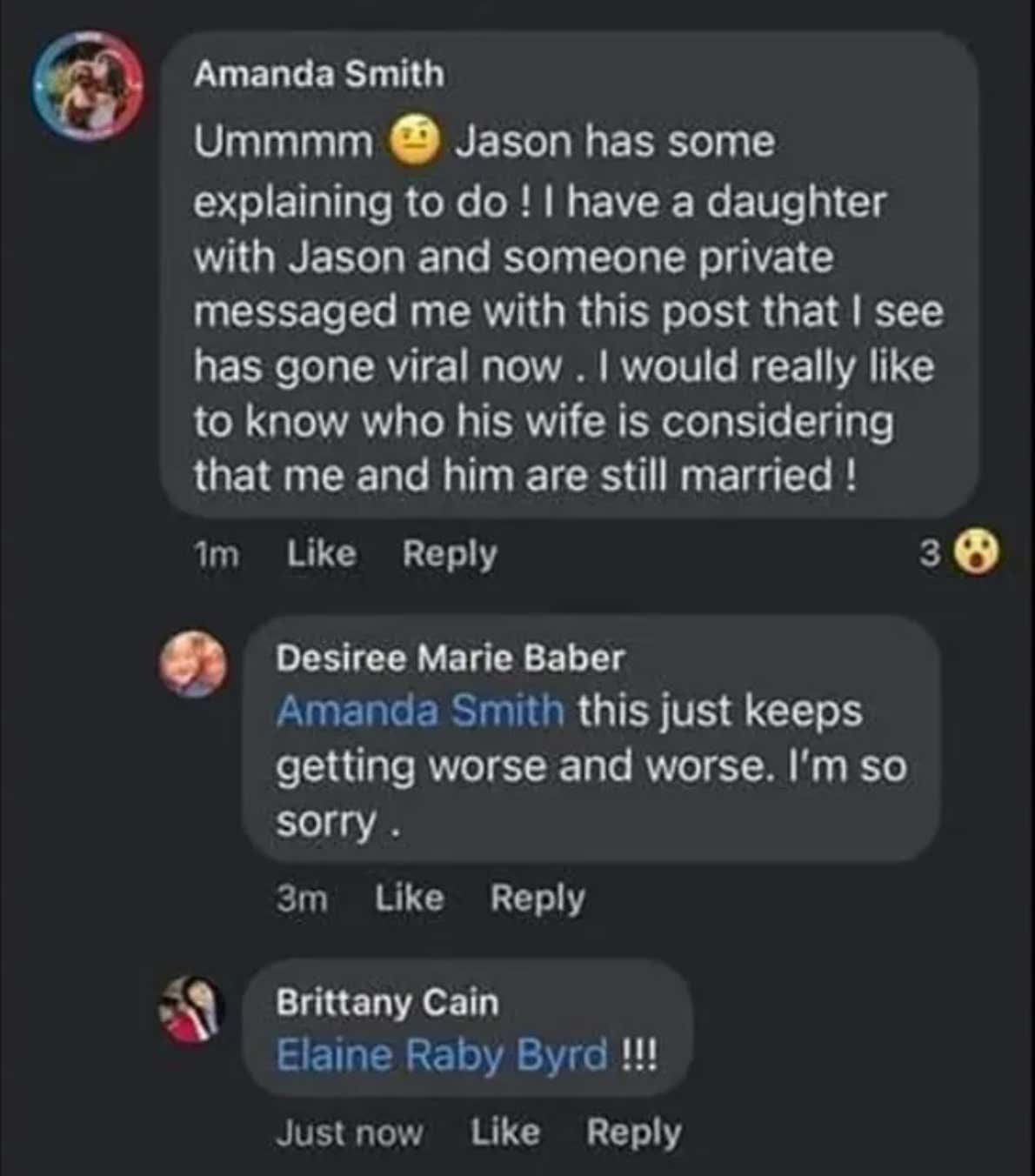 Kristi and the cheater were even engaged. At the time, he wrote on his current wife’s Opal Facebook wall, saying:

“I fall short daily of being the Godly husband.” 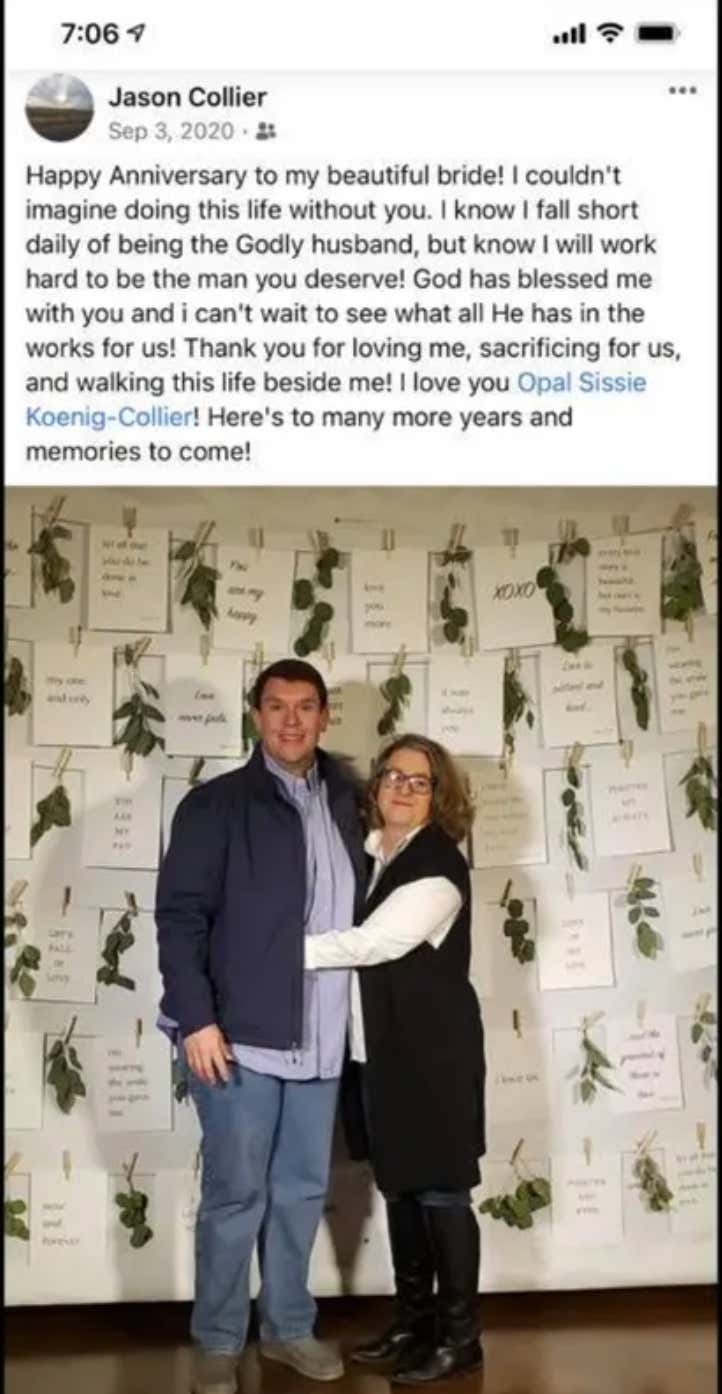 Collier is no longer present on social networks, but his ex and current girlfriends are busy swapping stories. So far, 15 of them came out, and they all say the same thing: they had no idea that Jason was taken.

Gotta feel for Jason here. Man when it rains it pours. Cecily opened a real pandoras box here on social media I don't think anybody expected to blow up the way it did. 1-2 side pieces maybe climbing out of the woodwork, but "wives" with children by the man, and 15, count em FIFTEEN, fucking girlfriends. Man alive.

And for a 41-year-old you have to admire his virility. Not many guys have that kind of stamina.

There's also a facebook group setup calling on Netflix to document this entire ordeal and it has over 190,000 people signed up to it.

This entire story leads you to ask was Jason just trying to get caught?

Had he gone so far that he knew he couldn't manage it any longer for the sake of his own sanity?

Think about it. Any person able to dupe 5, or 6 people, let alone 10 is a psychopath of the highest order. Even the world's greatest conmen would have to tip their hats. But 20 women? That's true fuckin talent. And a lot of responsibility and pressure. After ten girlfriend it probably just became a game for Collier seeing how many more girls he could add. Figureatively, like a juggler adding balls to keep in the air.

What's funny here is if Jason had done this on a gameshow, like The Bachelor, and been up front with all these women and told them he was "on a journey" to find true love, they all more than likely would have been totally cool with everything. Their competitive fires would have been lit and without even knowing it they would have instantly fallen in love with him and knew they had to marry him. Because that's how the show works. Jason's folly was keeping it all on the downlow and letting Cecily control the narrative by airing him out on social media. Let this be a lesson to all the philanderers and cheaters out there. Don't be like Jason.

p.s. - all the talk of getting caught up made this pop into my head on repeat and not mad about it one bit