Look at the Brits taking a page out of the team that kicked their dicks in 245 years ago' playbook. You don't like something? Raise hell in numbers and let the tyrants know. As Chief documented a few hours ago, Manchester United fans still haven't gotten over the American Glazer Family, who owns the World Champion Buccaneers as well, from attempting to secede from the Premier League and launching the Super League a couple weeks ago.

They took to the streets this morning, outside the stadium and the team hotel, before somehow breaking into Old Trafford Stadium and storming the field

They were lighting green and gold flares, the original colors of Newton Heath, the team's name way back in the day long before the Glazers purchased them, as a sign of defiance.

One thing is for certain, had England cared as much about taxing our founding fathers for tea as they do about their "footy" we would 100% still be waving the Union Jack and saluting the Queen and her inbred family.

Holy shit am I jealous.

For the record, this isn't some laughing stock of the league team like the Jets we're talking about. Manchester United as essentially the New York Yankees of European Soccer. The Glazers are essentially a carpet bagger version of the Steinbrenners.

Imagine if Pirates fans did this outside of PNC Park letting their piece of shit owners know that trotting out a team with a combined salary less than Mike Trout's this season just isn't gonna fly. Fuck your revenue sharing, coat-tail-riding asses.

Imagine if Bengals fans activated to do this outside of Paul Brown Stadium to protest its namesake's family and their disgrace of a corporation. Mike Brown is a notorious penny pincher, who employs a skeleton crew front office, skimps on scouts, and refuses to hire a real GM because he can do it himself. Clearly.

Imagine if Knicks fans did this outside MSG to send a message to Dolan? Granted he would demand photos of all of their faces so he could look them up on facebook and ban them for life because he has the thinnest skin on the planet, but maybe, just maybe it would send a message that even though he's a hero in his own mind, surrounded by ass-kissing, yes-man, sycophants, he is universally hated. And a failure.

Point is, can you imagine if fans of teams owned by pathetic, incompetent owners here in American pulled this kind of stuff? Manchester fans were just pissed their American owners spearheaded a new league that would have generated zillions. Not moving the team. Not having a fire sale of its players. Just changing the way things have been forever.

I went to the Millen Man March in Detroit back in 2006. By coincidence not intentionally. It was obviously hilarious. Burning mannequins in effigy. A parade to the stadium pre-game chanting down with Millen. A planned "walkout" of the game against the Bengals that never really happened.

We need more of this here in the States.

I would love to see how Manchester United fans would feel having the McCaskey family running the show.

The McCaskey's are basically the royal family when you think of it. A family that traces its lineage back a long long time ago by to a very admirable and noble man, but who now is a cast of carnival workers dressed up in off the rack suits. Kids born on third base that think they hit triples. Silver spoon-fed ignoramuses that are so vain they refuse to bring in real football people to run the operation. They have no other real "business" or revenue stream so they run the team with the bottom line ALWAYS in mind. They are incentivized to turn a profit and spend less because that's how the family makes its money, as opposed to other ownership groups who own teams as a status symbol and run them with their fans best interest in mind.

It would be fucking anarchy outside of Soldier Field on a weekly basis.

"Sell The Team" banners would be flying all over the place.

And to be totally honest, I don't think the CPD would step in to stop them. I could see them pulling an "Olè" like the Capitol police and letting the fans storm the stadium because when it comes to die-hard Bears fans civil servants like cops and fireman are at the top of the list.

Not to go down a very dark path on a Sunday morning on everybody, but since we're hear, let's talk about if the McCaskey's were to actually sell the team shall we?

One thing people might not know about me is although I am a moron, I have a ton of smart friends.

I live by the rule that you are the average of the 5 closest people to you. Surround yourself with people better than yourself and hopefully, some of their's will wear off you on. *Pro-tip.

Anyway, in one of the text chats I'm on that I'm in WAY too over my head in we (they) were discussing the new proposed tax bill and the ramifications it will have down the line.

One of my friends Joe knows this shit inside and out as he's a big banker hot shot so I got to picking his brain on how the proposed "step-up in cost basis at death" would affect heirs to big businesses and sports teams.

What's the "step-up in cost basis at death" you ask? Allow the big J's at Forbes to explain-

Forbes - When people inherit assets, a tax rule called stepped up basis—also referred to as a step up in basis—provides potentially huge benefits.

Assets that are passed down in a will generally have gained in value since the deceased purchased them, potentially decades ago. These capital gains are taxable when the asset is eventually sold by the inheritor. Stepped up basis minimizes the tax bill.

In the world of taxes and accounting, basis is where you start calculating capital gains taxes. Think of basis like the asset’s purchase price: You owe capital gains taxes on the value gained above the basis. The stepped up basis means that inherited assets have their basis reset to a present fair market value at the moment they are passed on to an inheritor in a will.

This is currently enshrined in Section 1014 of the Internal Revenue Code, which states the basis of an inherited asset rises to “the fair market value of the property at the date of the decedent’s death.”

Nothing puts people's brains to sleep faster than tax code talk, so to put it in a layman's terms example -

Anne is a single middle school teacher living alone in Austin, Texas, and takes home $60,000 a year, making her a typical average American. Remember, Biden has promised not to raise taxes on those earning less than $400,000, so Anne doesn’t pay much mind when the administration passes a series of tax increases.

But when Anne’s bachelor uncle suddenly passes away, he leaves her his Tampa Bay condo. Having no desire to live in Florida, Anne immediately decides to sell the condo, which fetches $600,000, a decent return on the $100,000 price her uncle paid for it two decades ago.

What would Anne owe Uncle Sam? If she were to sell the house under the current rules, she would owe little or nothing. The basis for the condo would have been stepped up when she inherited it from her uncle—from $100,000 to fair market value, which would have been the same or very close to the $600,000 sale price.

If Biden were to nix stepped up basis, then she could owe significant taxes on the inherited property. How much?

Remember, Anne’s not a high earner, she’s a middle school teacher. If Biden eliminates stepped up basis before, she could see her taxes on the sale of her uncle’s inherited home jump from $0 to nearly $90,000. That’s a middle-class tax hike.

So what would this mean for the McCaskey family? 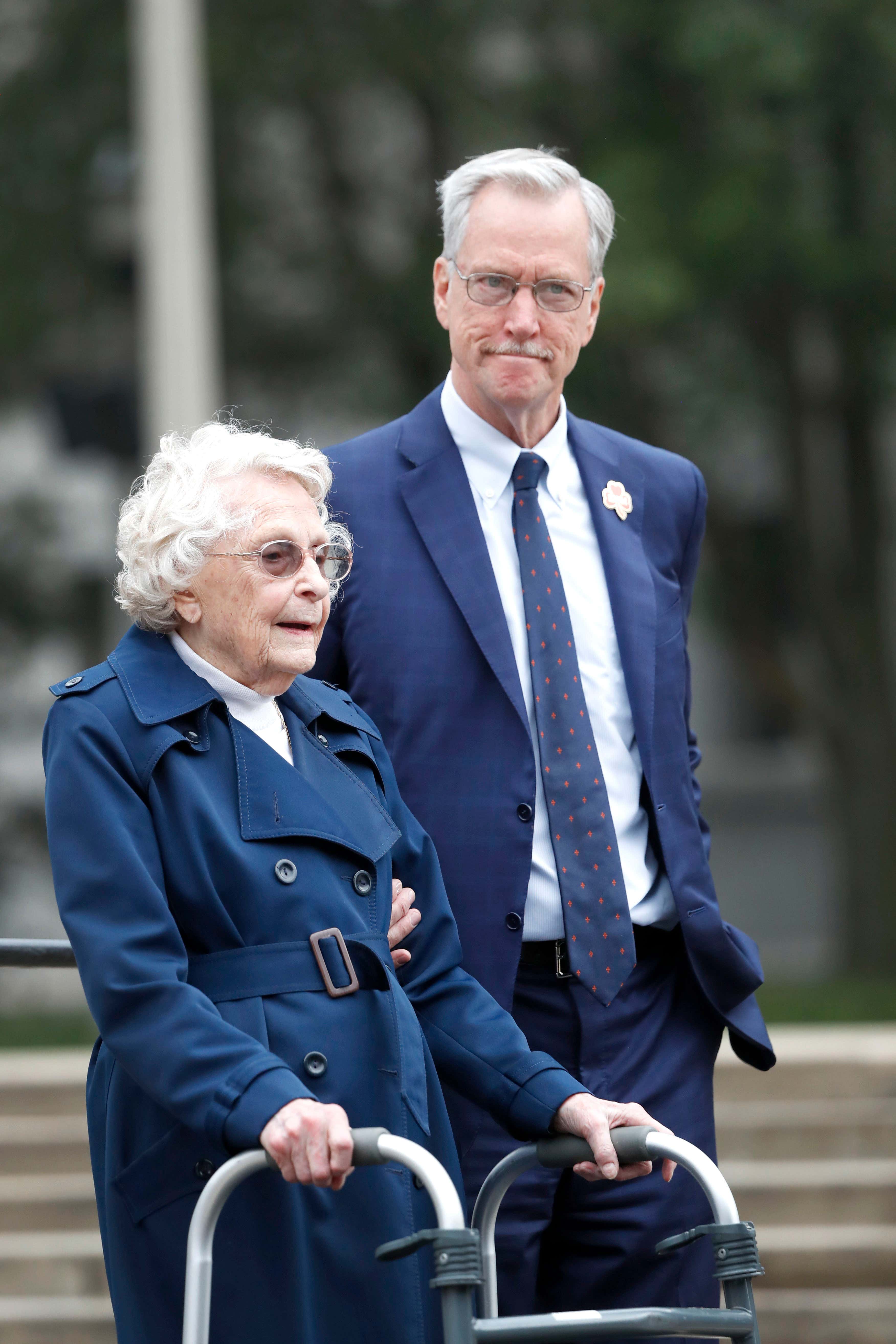 If Virginia McCaskey has a net worth of, let's call it $2.5 Billion, and 99% of her net worth is tied to the Chicago Bears, (which isn't crazy to say), then based on the proposed billionaire wealth tax, Virginia would owe $75 Million per year just in the wealth tax.

Based on the Chicago Bears net operating income, and after taxes, it's safe to assume that she is nowhere near liquid enough to come up with $75 M in cash without having to free up some ownership stock or sell something. No matter how "rich" you are, that kind of liquidity isn't easy to come by. Especially annually.

But that's just the wealth tax.

If the current administration goes through with doing away with the "stepped-up basis" it's a whole world of problems not just for the McCaskey family but for Bears nation and their hopes of one day being freed from their unjust punishment of incompetent ownership.

For story's sake, when Virginia inherited the bears from her father, her "cost basis" was whatever the Bears valuation was at the time of sale.

The original purchase price for the Bears back in 1920, was $100 (no joke) by the iconic George Halas.

Considering Virginia inherited the team officially in 1983, and the only teams acquired close to then were the Denver Broncos (for $78 Million by Pat Bowlen) and the LA Chargers (for $70 Million by Alex Spanos) let's say the Bears were worth $75 Million in 1983.

If Virginia were to pass away today, and the Bears are worth their latest evaluation of $2.9 billion, then all her heirs inherit the team at that value. Meaning that if they sold their shares tomorrow for $3 Billion, they would owe zero in taxes.

BUT, if the Biden administration gets rid of the step-up in cost basis at death, like its pushing to, then her heirs would inherit the team at the SAME cost basis that Virginia did. Which could be that $75 Million we estimated the team was valued at in 1983.

What this means is that if any of her heirs wanted to sell the team, they would owe tax on the $3 Billion minus the $75 million which without having to do the math you can figure out would fucking crush the family fortune and they definitely would not be billionaires anymore.

50% in taxes upon sale is bonkers.

So bottom line is, I would never wish death upon anybody, especially a nice old lady, but if Bears fans hope to see competent ownership within their lifetimes, they kind of need her to go asap OR they need a miracle and need this bill to die.