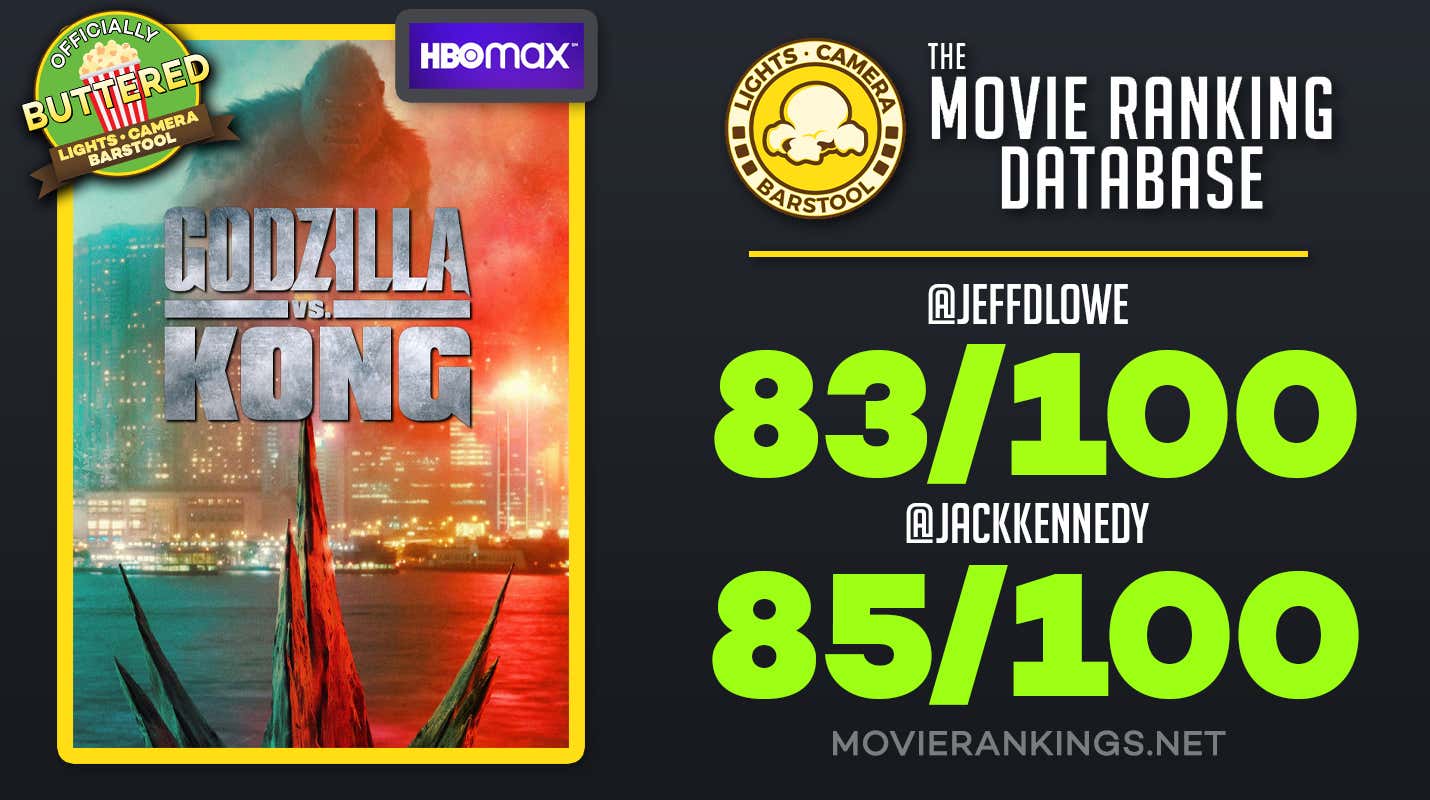 Folks, big-screen blockbusters are back…

…and they're as fun as we remembered.

In a time when monsters walk the Earth, humanity’s fight for its future sets Godzilla and Kong on a collision course that will see the two most powerful forces of nature on the planet collide in a spectacular battle for the ages. (via MovieRankings.net)

JeffDLowe (83/100): 'Godzilla vs. Kong' lives up to its promise to deliver on what the title promotes, as the newest sequel brings as much badass monster-fighting action as you'd hope to see. Is the movie high-art? Does it have deep characterization? Script-wise, will this movie blow you away? No, and it's not intended to be any of that, this movie is here to kick some ass, and does just that, and more.

The problem with 'Godzilla' (2014) for people was that it lacked Godzilla, and focused too much on the humans. The problem with 'Godzilla: King of the Monsters' (2019) for people was that it had Godzilla, but tried too hard give deep characterization to the humans, overshadowing the monsters. Well, I am here to tell you that they "fixed" everything.

(NOTE: I did like 'King of the Monsters', to be honest)

Even someone like myself, who liked the previous movie, can clearly see they shifted all of the attention to the monsters. The humans are there, and they have to be, but this movie prominently features what it promises: monsters fighting. It's massive, the scale is wild, it looks incredible, it's loud, and it will entertain the hell out of you.

This is a movie that knows what it is, and doesn't try and pretend to be something different. There are, of course, faults from this, as it isn't a perfect movie. Am I happy they sacrificed diving far too deep into the story of the characters and monsters? Yes, I think it clears the way for what we want to see. But it does leave a trail of mediocrity in some spots, a casualty of making a movie that only focuses on the seemingly endless big fights. A movie such as 'Godzilla vs. Kong' can really only be so good when it commits so heavily to something such as two big CGI monsters fighting on the big screen.

This movie fucking rules and was a great return to the IMAX theater for me. It explodes off the screen into your face and gives you the massive, crazy blockbuster feel we all have wanted from this franchise. Sit back, relax, and get ready to enjoy a movie that doens't fail to live up to the monster fighting hype.

KenJac (85/100): Lizard fight Monke. LIZARD FIGHT MONKE! That is what people wanted and it is exactly what this movie delivered. It corrected the mistake of the last movie by not even really bothering with the human storylines and giving us way more CGI battles instead. I think there are a few missteps, but nothing that isn’t easily forgivable.

From an acting perspective, there is nothing positively noteworthy which is exactly what I wanted. Brian Tyree Henry was a bit of a miscast as a neurotic nerd, but he was otherwise fine. I will say that I think it was a mistake to add more human characters into the mix. The last movie already had too much going on, so the addition of a lot of these characters seemed unnecessary. Work with what you already got!

On the technical side, I loved it. They focused almost entirely on making sure the monster fights they gave us lived up to all the hype we had for it. There are fights in multiple locations, times and they use all sorts of different moves. The effects were incredibly well done, showing off both Monke and Lizard in incredible detail. There is a one-night fight sequence which is one of the cooler large-scale action sequences I think I have ever seen.

What it boils down to is that it is entertaining as all hell, which is exactly what we wanted. It might be the most singularly entertaining movie I’ve seen since the pandemic started, to be honest.

--
The movie is Officially Buttered and you should, if you feel safe, go see the movie in theaters. You can head to Lights Camera Barstool right here to listen to our latest episode where we will review, in full, 'Godzilla vs. Kong' this weekend.