In an attempt to force the sale of the Chargers, a sister of controlling owner Dean Spanos filed a petition in Los Angeles County Superior Court on Thursday arguing that mounting debt has imperiled the family’s finances and the only solution is to put the NFL franchise on the market.

The petition by Dea Spanos Berberian, who serves as co-trustee of the family trust along with her brother, alleges the trust’s debts and expenses exceed $353 million. In addition, according to the filing, the trust doesn’t have a plan to pay more than $22 million it has pledged to charities.

I assumed that the Spanos Family, like most other fail-children of billionaires, were in debt. However, to see that they are $350 million in debt was pretty shocking. I have no idea how this situations works from a financial standpoint so it's hard to get hopeful, but I will say that I would be absolutely ecstatic if they were to sell.

The Spanos era has been 36 years of failure. No rings, lots of notable ownership fuck ups, and a fan base that basically been destroyed. Seriously. It's like me and 20 other people left. Bottom line, the Spanos fail kids are almost entirely to blame for the downward trajectory of the team.

Before going more into this, here was the other siblings statement in response: 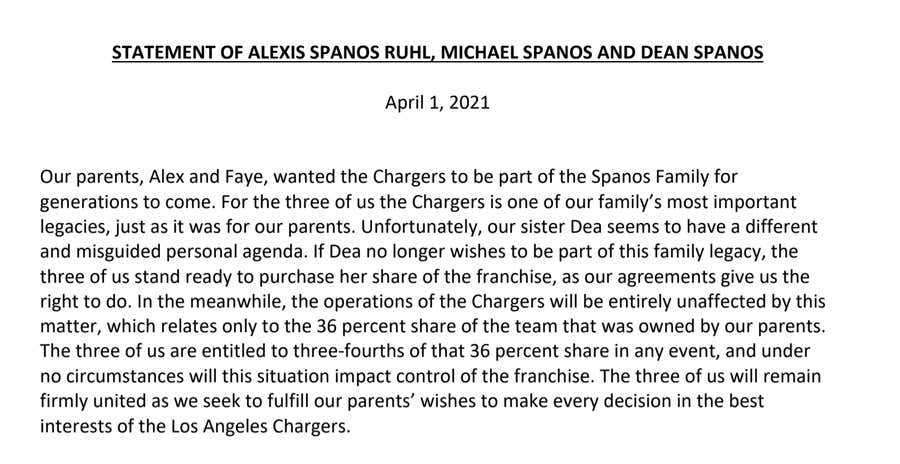 Again, I'm not in the know of how these deals work. That said, I'm pretty sure the Judge can just. press the "Force Sell" button that is right in the middle of the courtroom. Hey, Judge XYZ,

An interesting part of this article is the mention of Jeff Bezos. It's no secret that he has been thinking of dipping his extremely human toes in the water of team ownership, but this is the first time I've seen the names thrown out there together.

The petition noted reports that Amazon.com founder Jeff Bezos, worth an estimated $180 billion, is interested in becoming an NFL owner and said “the Chargers could be a perfect opportunity.”

Here is a fact: The Chargers are not the most popular sports team in LA. They're probably not even top 10! On top of that, they might not even be a top-5 most popular football team in LA. The city and state is rife with bigger and louder fans of the Raiders, 49ers, Rams, Cowboys and more. They're stuck in a city where nobody gives a flying fuck about them, and the ownership either doesn't care about changing that or lacks the means. You know what might go a long way in changing that? Money. You know who has more of that than anyone else on earth? Jeff Bezos.

I don't think Bezos is a good guy and he may make a terrible owner, but I'm totally fine with the Chargers becoming his divorced guy hobby. Some guys buy a retro car or a boat, Bezos can do a whole ass football team. Why not?