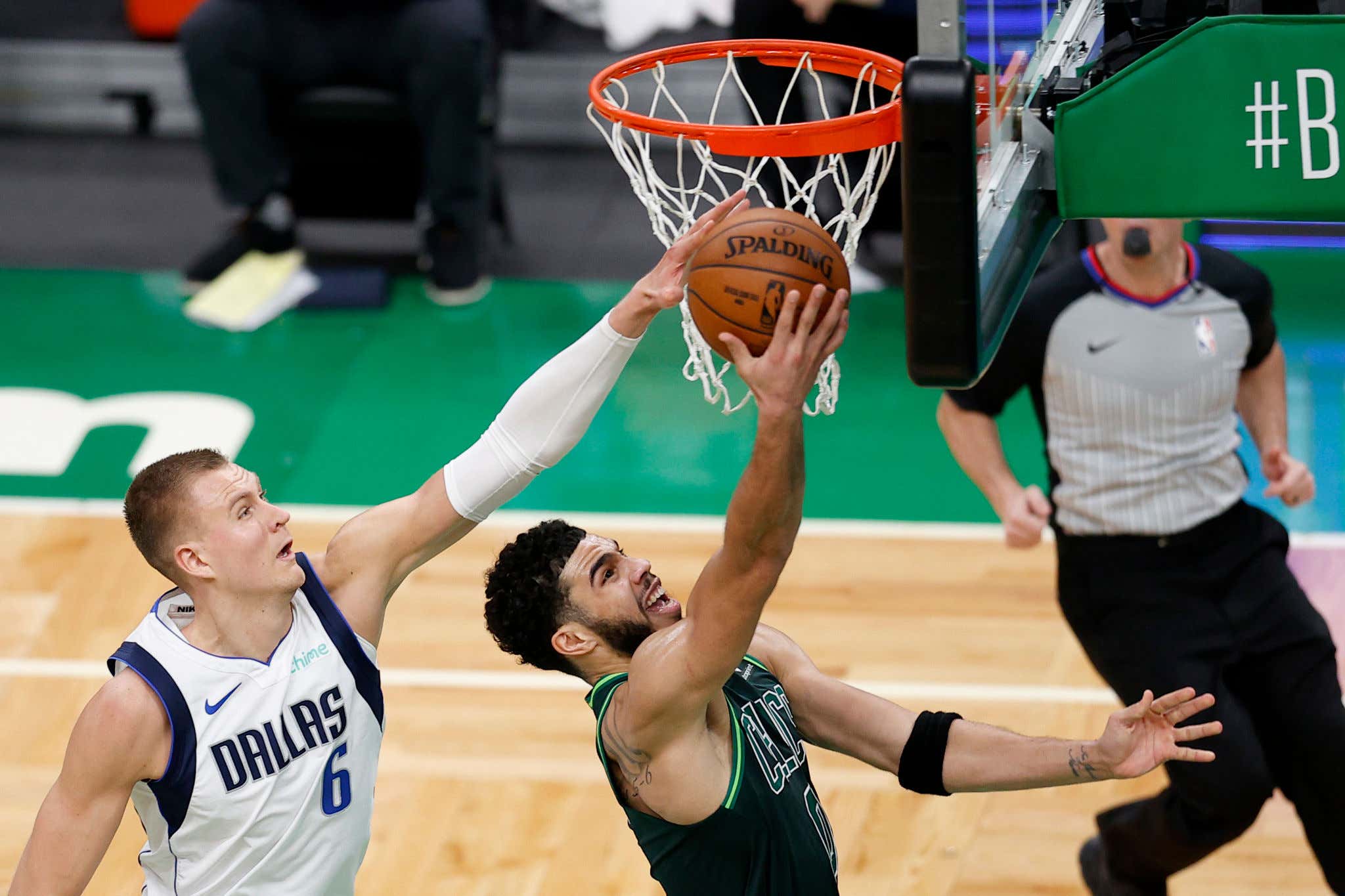 What the hell. Honestly, what the hell. As I sit here to write this blog, that's all I can say to myself. What the hell. Let me approach this another way that might help explain how most of us are feeling. The Celtics fucking stink right now and have for most of the season. Comically bad. But their brand of stink is different from someone like let's say..the Pistons (who they can't beat). You see the Celts do this thing where they play like shit, then turn it on and look great, only to then still lose in heartbreaking and frustrating fashion. It's hurtful really. I know it's Opening Day and maybe you are looking for positive vibes, but I wouldn't be doing my job if I didn't basically sum up where we are at the moment as painful as it is.

Since the All Star break (remember when this team won 4 straight going in?), the Celts are now 4-8. Half of those losses have come at home. They have one (1) win against a team over .500. Half of those 8 losses have been 2 possession games or fewer. This gigantic homestand, the one that was supposed to provide a spark with fans in the stands and be an opportunity for a run for this team has started 0-2. Both games playing out the exact same way. No defense, frustrating offense, a huge deficit followed by a nice rally only to fall short at the end. It's been the story of the entire season. An outrageous 21 of their 25 losses have come in the NBA's "clutch". 12 of their 25 losses are by 6 points or less.

If this was the profile of any other team in the league, we would say that team stinks. That does not change just because it's happening to our favorite team. They stink. That doesn't mean the world is over or they still can't turn it around and finish in the 4/5 spot, but we can't just assume they'll get there. They have to show us that they can ya know….actually beat someone. Play with a consistent 48 minute effort. Play anything that closely resembles perimeter defense. The best players on the team have to show up and set the tone. The coach needs to be better. The list goes on and on.

If they don't, last night and really what we've seen all season is going to continue. At some point we need this team to stop talking about being better and actually be better. When they play at their peak, we see how good they can be. They can run with any team in the league. But they've also proven to not be good enough to take games/quarters/possessions off. That's something that has become too frequent and that's how you end up being 23-25 through 48 games.

As you know, we don't hide when things are shit. We blog through it. So let's dig in.

- I almost wanted to skip this section entirely. I mean someone has to hold this team accountable amirite? It's hard at times to find the positive in another shit sandwich, but that's why I am a professional. For example, I thought for the most part Jaylen was good in this game

Defensively he was matched up with Porzingis on 16 possessions and sort of held his own despite the height issue. Outside of his 9 points, no other Mav did all that much against Jaylen. He finished with 4 steals and was 9-17 from the field. That doesn't mean he was perfect, but it felt like he was at least competing in his 36 minutes.

- The same way we know this team will forever be inconsistent until proven otherwise, I do think there's something to be said when it comes to this team's refusal to quit. We've seen Celtics teams in the past that when shit starts to go off the rails, they say fuck this and pack it in. 15 point leads become 30 point leads. With this team, they haven't quit. They scratch and claw their way back. That's both awesome and frustrating at the same time. Awesome because it tells us they still give a shit, but frustrating because why can't they play with that passion and energy the whole time. Why must they get down by 20 before they start to play with pace and actually defend?

Moral victories are meaningless when it comes to their record obviously. But it does tell me this is not a team that has quit on the season.

- Wild that in the second half when the Celts actually showed up on the defensive end that they started to turn things around. All of a sudden their best players looked a whole lot better on the other end. Jaylen (4-8), Tatum (7-15), Kemba (5-10) and Smart (4-8) were much more effective. As a team, they caused 11 TOs and held DAL to 6-16 shooting from behind the arc. They gave a shit. The team still took a shit ton of threes (23 of their 47 FGA), but they weren't the bullshit isolation kind. They moved the ball, they attacked the paint, they played the right way. Too little too late maybe, but at least we saw it and that's why they were able to be in a position to win this game.

- You may be wondering where Jayson Tatum is and why he wasn't in the Good section. Well, because I didn't think he was all that great. Same with Kemba. You look at their final lines and they look fine. A 25/9/3 for Tatum and a 22/5/6 for Kemba would usually get them in there. But if you watched, you know what I'm talking about. Tatum finished 10-24 (1-8), and he settled pretty much all night until the fourth quarter. His isolation offense in the second quarter was a huge problem. Dribbling for 20 seconds and then forcing a shot, the ball sticking and everyone else standing around watching, he has to cut that shit out.

On the season Tatum ranks in the 42nd percentile in isolation offense. He's averaging 0.84 points per iso possession and shooting 35%. He only scores 35% of the time he does it, yet he runs iso at 18.7%. That's the 9th highest frequency in the league. As the team's best player, he needs to recognize this shit is hurting and not helping. That's not to say he should never iso, but when it's not working he needs to switch it up. Then in the third quarter with the team trying to make a comeback, we saw him settle for homerun threes. Again, those are shots we know he can make, but the situation is everything. The fourth quarter is a great example of why it's so frustrating to watch. When he's aggressive, he gets to the rim whenever he wants. When he settles, the offense tends to hit a rut.

- With Kemba, like everyone else he was much better in the second half. The issue is there are two halfs in basketball and his first half was a bit of a disaster. Now just offensively, but he really struggled to guard anyone. When the Mavs got the switch with Kemba on Luka, he got destroyed (8 points). He struggled to stay with Jalen Brunson which isn't exactly great. Add in his 7-19 (2-9) and the 22/5/6 has a little different of a feel.

- It really sucks that Rob was a late scratch because he's sick. It just always seems to be something this year.

- I say it every blog and I'll say it again. Until this team wakes up and starts defending the perimeter, nothing is going to change. Just like the Pelicans game we saw the Mavs come right in and kill this team from three. They finished 19-39, but were 13-23 in the first half. Some were ridiculous Luka step backs which you live with, but the majority of them were not. This team is not good enough offensively to let opponents make 19 threes a night. It's crazy that this was even a game considering the Mavs were +24 from behind the arc.

For a team that makes just 13.7 3PM a night, that's very frustrating. Unfortunately, this is what happens every night. Teams somehow never miss from three against the Celts because the Celts cannot stop giving everyone wide open looks. No surprise that both NO and DAL games had the same result when both feasted from three.

Welcome, Moe Wagner. This is your life now. Daniel Theis can tell you all about it. Meanwhile, as a Bull, Theis has played over 40 minutes and has 2 personal fouls. You cannot make that shit up.

- If Evan Fournier was brought in to help this team offensively, maybe we should see what happens when he touches the ball. Let me ask you something. Do you think he's going to stick around if nobody ever passes it to him? He wasn't even bad last night, but only 6 FGA is not nearly enough. I mean this is wild

I'm not saying they need to force things to him, but his role cannot be to just run to the corner and hope someone passes it to him. I don't need Marcus taking threes when Fournier hasn't touched the ball in like 5 straight possessions. This dude was a 19 point per game scorer and he can't even touch the ball. It's a problem. If you were him, would you stick around for this type of offense? I wouldn't.

Maybe the adjustment is to run him with only one other starter, but the whole point is having him fill that Hayward role with the starters. It felt like Hayward got the ball a whole hell of a lot more than what we've seen Fournier get through two games.

- I don't know what that 2nd quarter was, but it wasn't basketball. Just 28/8% shooting, giving up 34 points on 54/72% on the other end, a whole bunch of Tatum iso and pretty much nothing but threes from anyone who touched the floor. Things started to turn and there was no resistance. As Brad said, they nosedived

- For those who were screaming for Brad to be fired and all this shit how he's mostly to blame for his players not showing up, may I present Gregg Popovich

Brad is not without his issues, but let's not give the players an excuse. It's on them to show up and be ready to go. To play for 48 minutes. Danny even said as much this morning

Until the players decide to show up on the defensive end and play the right way, nothing will change. Nothing Brad or Ainge or anyone can do will fix that. The best players have to set the example, and too often that does not happen. That's why you are where you are.

The Celts now have a pretty massive stretch in their schedule coming up. A run of HOU/CHA/PHI/NYK is a pretty important stretch. They are 2 games out of the 4 spot with both CHA/NYK ahead of them. A matchup with Philly will always be important, mostly for Twitter reasons, not for actual seeding reasons. If this group is every going to get out of this funk, now would be a pretty good time to start.