What the fuck is this? WHAT THE FUCK IS THIS?!? How did Jay Glazer not sniff this out and shoot it down? What kind of insider is he? Don't tell me this is an April Fool's joke either because you can't pull that shit on March 30th. March 31st at 11:59:59 PM in Japan MAYBE. But anything not on April 1st doesn't count. That's the only rule those stupid ass jokes abide by and Stray is way too media savvy to screw up something like that.

I know that I shouldn't care about the oral health of any man let alone one that doesn't even know I exist. But Michael Strahan and that gap tooth smile are an iconic look and the first thing you notice about him. He took down the undefeated Patriots with that gap. He took Tiki Barber's entire post-career dream life with that gap. He became America's sweetheart covering every corner of pop culture with that gap.

I get that Strahan probably hated that gap his whole life like I hate my gut. But you can't just change your signature blemish once you are established. You gotta do it when you are on the come up. That's what Portnoy did with the bald spot. Doing it now after you've achieved all your fame and fortune is just piling on to common schlubs like me. I mean look at this guy! 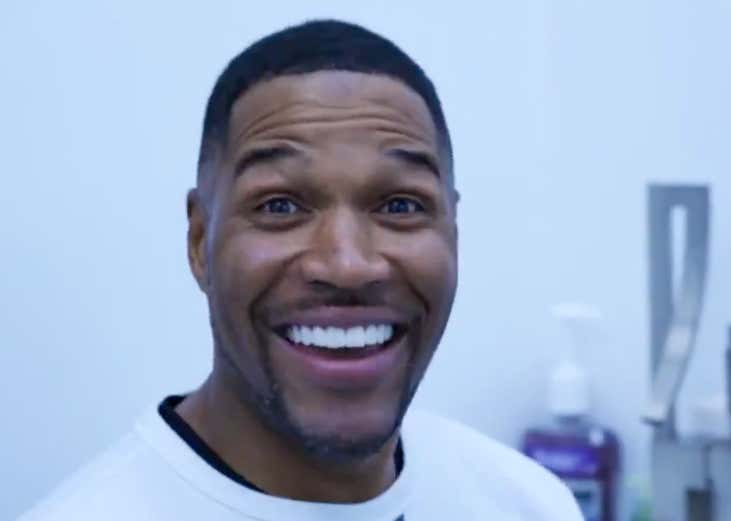 I'm just gonna come out and say it. Michael Strahan is pretty. Not handsome but pretty.

I hate to do this but I think we have to remove Michael Strahan from the Hall of Fame because this is the man that was inducted to Canton:

P.S. No chance that the dentist that performed that surgery was a Giants fan either. Dentists may have some sort of hippocratic oath, but that shit doesn't trump the oath you take as a football fan. That dude is a Jets fan at best, Cowboys fan at worst.