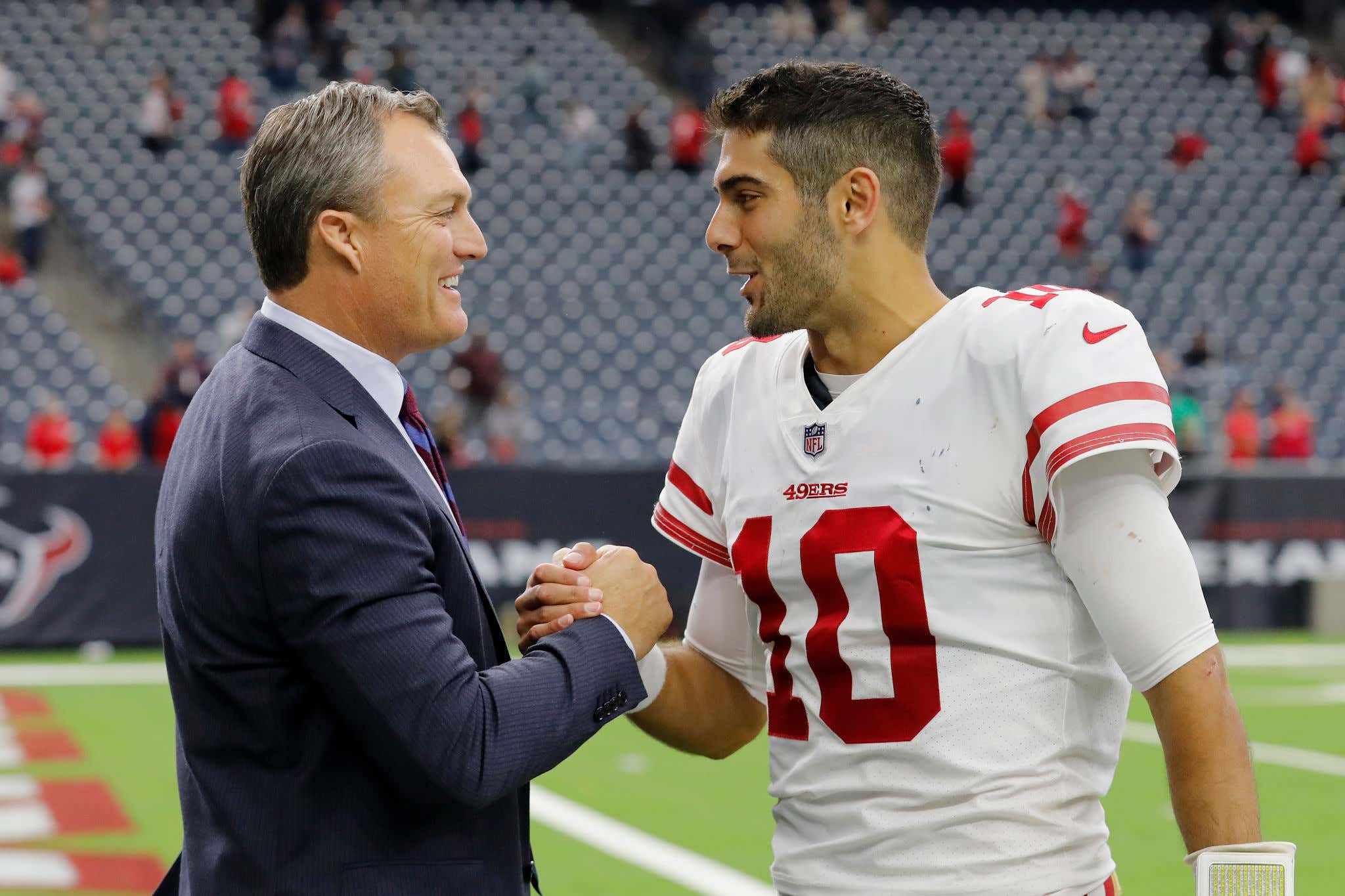 While it doesn't quite reach the fast-paced, action-packed levels of an NBA trading deadline, with rumors swirling and big names being bandied about and Woj carpet bombing the world, the NFL has its own Lying Season, and we are in the midst of it. If this was Vermont Leaf Peeping Season, this week would be the equivalent of mid-October and the apple orchards would be crawling with bored boyfriends.

Granted the 2021 quarterback trade market that started out with so much hype didn't really pay off the tease. A couple of the highest profile players in the league, Russell Wilson and Deshaun Watson, tried to force trades, NBA-style. But nothing came out of their efforts. Everyone in Seattle just kind of went radio silent on Wilson and Watson is getting accused of being a serial creep, making him pretty much radioactive. And everyone else who was rumored to be on the move, like Matthew Stafford and Carson Wentz, has been moved by this point.

That leaves really only Jimmy Garoppolo as a plausible trade target. The 49ers spent three 1st rounders and a 3rd for the No. 3 pick. He's got $51.1 million left on the two remaining years on his contract, but his guaranteed money has been paid up. If they release him before June 1st, the dead money hit is $2.8 million. Therefore it makes all the financial sense in the world to deal him now and draft his replacement. Which in Lying Season means one thing and one thing only. Reports that the Niners have no interest in trading him:

Make that two things. Because the reports the Niners aren't interested in talking trade has to be met with counter intelligence indicating no one's interested in trading for him:

NBC Sports - A source confirmed to NBC Sports Bay Area's Jennifer Lee Chan that the 49ers have no plans to deal Garoppolo.

NFL Media's Steve Wyche said he spoke with 49ers general manager John Lynch, who told him he called Garoppolo to tell him this doesn't change his standing with the team.

"Yes, we decided to go ahead and do this. Once it was finalized, the first thing we did was call Jimmy Garoppolo to let him know he's still in our plans," Wyche said Lynch told him. …

Garoppolo also has a no-trade clause in his contract, which could make it difficult to deal him if they wanted to go that route.

Some are even suggesting the team most interested in would be stupid to have any interest. Because their quarterback situation is all set and there's no need for a guy who led his team to a Super Bowl one season ago.

If you don't have the stomach for it, Lying Season will make your hair hurt. It should come with a list of side effects longer than an anti-depressant. But if you can truly embrace it, lean into it and enjoy the carefully planted stories, posturing, and Grade A USDA prime bullshit that goes along with it, a season like this can be a thrill ride. But the key is to just not buy into anything that anyone is selling and just use your head.

Crazy as this may sound, apply a little common sense. Ask yourself what is the most logical conclusion to all this? To believe the 49ers are sold on Garoppolo as their QB1 is to believe they'd package three 1st round picks and 3rd in order to NOT replace him. Or to replace him in 2022. Try to wrap your brain around that scenario. It's September. Garoppolo is under center and being paid $25 million for a team that has so little faith in him they moved a mountain of draft capital on his replacement, who's standing behind Kyle Shanahan wearing a "SF" hat like a trainee at Burger King.

Now look at it from the Patriots perspective. They drafted and developed Garoppolo to be the Heir Apparent. The only reason they traded him in 2017 is because Tom Brady is in possession of the Sorcerer's Stone, giving him the power to cheat professional death. They couldn't keep both, so they kept the one who went on to throw for 505 yards in the Super Bowl and then win the next one. Anyone trying to push a narrative that Bill Belichick re-signing Cam Newton to a one year deal for the 30th highest salary at the position (mostly incentives and very little guaranteed) is somehow proof of his unwavering commitment to the guy is either lying or simply can't do math. Same with anyone who's arguing they can't afford Garappolo because they don't have cap room. The numbers are fungible. For 21 years Belichick's army of accountants have been able to restructure existing deals to free up space when he really likes a player. And he really, really likes this one.

Now look at it from Jimmy G's point of view. That no trade is huge. Those do not come cheaply at the NFL bargaining table because they are one of the few tools at a player's disposal to gain leverage over his team and a say in his future. Why would he want an arrangement where he spends 2021 as a lame duck starter? Knowing that his replacement is staring daggers at green dot on the back of his helmet every time a drive stalls. That the stadium is filled (to Covid capacity) with people demanding the rookie get his shot every time Garoppolo throws a pick? And that he's living his life one loss or one tight quad away from being benched and never returning to the QB1 role. Name any veteran quarterback with his track record who'd put up with that scenario if he had the juice to force a trade?

And finally, look at the competition for Jimmy G's services. How many teams truly do not have their quarterback situation already settled or about to be through the the draft. Aside from New England, you can make a case for Carolina, Chicago and Denver. The first two are San Fran's competition in the NFC, making them less than ideal. And the Niners and Pats are not scheduled to face each other for another three years. The Broncos were 5-11 last year, making them less desirable for Garoppolo to waive his no trade. The Patriots want him, he wants them. Or do I have to remind everyone of these exchanges between Jimmy G and the Patriots coaches at the end of the game last October?

Not to mention the working relationship Belichick has with John Lynch. Which is part of the reason he traded Garoppolo to him as opposed to somewhere else. To give a player he likes an ideal landing spot as well as do a solid for a GM he's collegial with. And who he had in training camp at the tail end of his career. There is literally not one aspect of a trade back to New England that doesn't make perfect sense for all involved. Despite all the rumors. So the second best advice is to ignore it all:

Though the best advice is my own. Enjoy the process. This isn't a matter of "if," but "when" a trade gets worked out. Jimmy Garoppolo to New England. Bank on it.