This GIF perfectly sums up how I feel about the current state of the Boston Bruins. Just painful to watch. It's sad. I'm sad. This team is so much better than what they currently are. Let's get into the good, the bad and the downright ugly from this weekend (1-1).

- Brandon Carlo skated today at practice in a regular jersey. Could return tomorrow.

- Jeremy Lauzon was a surprise return to the lineup on Saturday after breaking his hand in Lake Tahoe.

- Charlie McAvoy is carrying this team right now. Will be nominated for the Norris Trophy. He put on a clinic and set up Saturday's game tying goal. Matt Grzelcyk is right there with him, too.

- The PP has been meh, no other way to put it. What was once automatic is no longer. No Brad Marchand certainly doesn't help that. But the B's are 15th in the NHL on the PP clicking at a 22.7% rate. Their 5v5 scoring woes pale in comparison, but the man advantage has seen better days. 4 minute PP squandered last night vs. New Jersey.

- The officiating last night vs. NJD. Both ways, just brutal. On the B's side the non call trip on Krejci (because the B's were already on the PP), McAvoy getting clipped in the face… bled… no call (they eventually reviewed it and called it)… but sheesh. Just dog shit.

- Video replay. B's had 2 "goals" called back in the last two minutes of the game, 1 due to goalie interference (Krejci knocked puck out of Blackwood's glove) and the 2nd the puck was inconclusive, couldn't tell if it went over the line. Frustrating, but nothing they can do about it. If The Bergeron goal counted against the Bruins I'd probably be furious, so.

- Hate to put players in the "bad category" but Zboril was dropped to the bottom pair of the defense. He just hasn't looked right as of late. Wonder if Tinordi slides back in tomorrow night or if they're going to let Zboril play through it. Crazy how much of a drop off the defense is after McAvoy and Grzlecyk (with Carlo out of the lineup).

- Friendly fire. Frederic hit Bergeron in the face with his elbow last night, incidental, but Bergeron's nose is definitely broken (again). Still handsome, though. Bergeron took a puck to the leg last night as well. Tough game for 37.

- Tuukka Rask did not play this weekend due to an upper body injury (upper body, back maybe?). No word on his return. Out for tomorrow. Bruce Cassidy has not decided who will play tomorrow night.

- They almost lost to the Buffalo Sabres.

- The Bruins refuse to score goals. They just lack the ability to put the puck in the back of the net and it's the most infuriating thing on the planet. Not to pick on David Krejci but he had a prime chance at an open net but opted for the extra pass. P a i n.

- Mackenzie Blackwood stoned the Bruins' with a 40 save shutout.

- The Bruins have dropped 4 of 5 to the Devils this year. Points are at a premium right now, the B's have games in hand on other teams but are squandering it against lesser opponents. Frustrating to say the least.

It is truly painful to watch this team right now. Just so uninspiring. Granted, injuries and players out and what have you. But man, it's brutal.

I don't know how many times I've written it this year, but this team needs help, and it needs it right now. Reinforcements are coming, sure, but this team needs a spark, the trade deadline is in 2 weeks. Don Sweeney is going to have to get crafty, stop me if you've heard this before… but the B's need a top 4 d-man and a scoring winger (I'd love to see both Ekholm and Palmieri in a Bruins uniform). Maybe he's waiting for prices to come down? But my god does this team need something, anything. 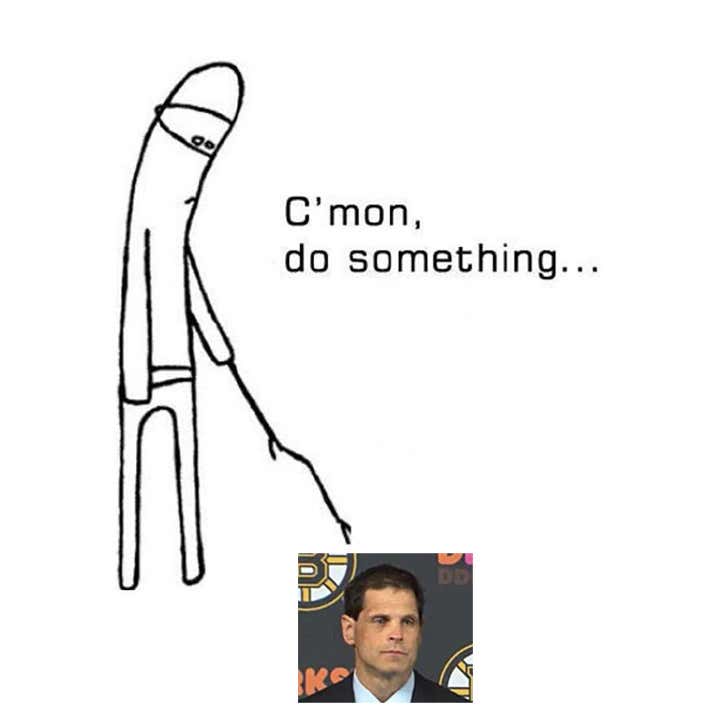 What do you think of the team right now? Sound off in the comments.