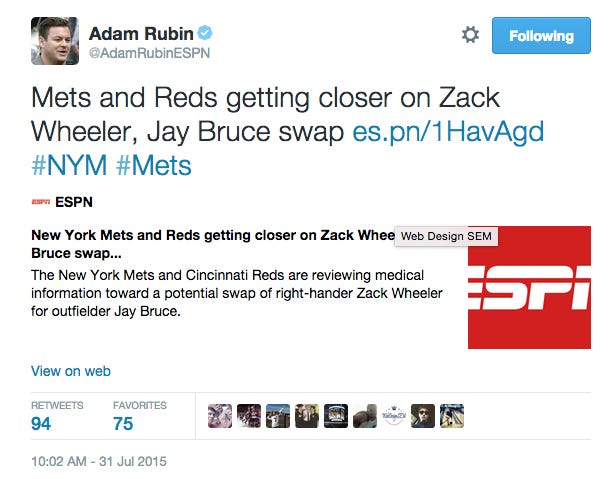 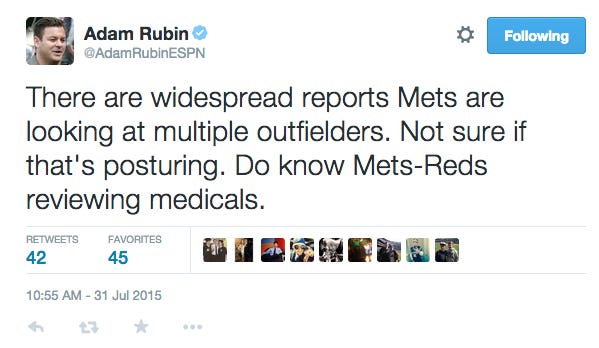 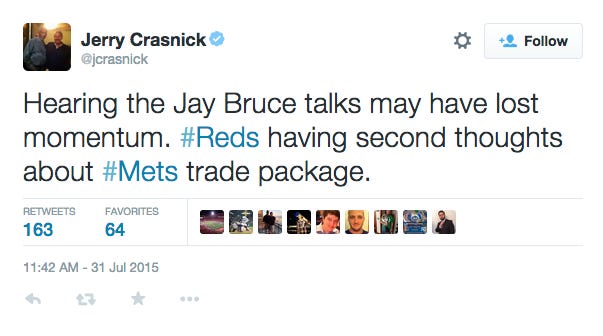 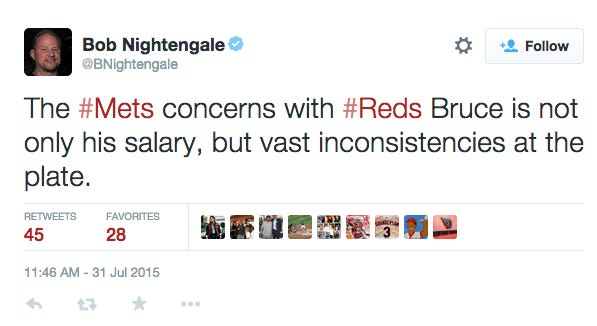 Looks like the Mets are trying to salvage the deadline (or at least give their fans the appearance they are trying to salvage the deadline) with a Wheeler for Bruce swap. But it looks like the Reds are now getting cold feet and having 2nd thoughts. I wonder if that could be because they are TRADING FOR A VERY VERY INJURED PLAYER. Seriously its insane the Mets are even getting teams in on this idea. Somehow they are pulling off these almost-heists. Concurrently, the Mets are now getting “cold feet” AKA they are just floating out these talks to placate fans. They will say that Bruce’s performance is their hang up, but as I’ve said 50,000 times (and been right all 50,000 times) its always all about the money with the Wilpons. I got a lot of thoughts on it, but ultimately, if it happens as is being currently reported, I’m down with this move.

1. The Gomez Tease makes Jay Bruce feel like more of a bum than he is – Gomez would have been great. Young, fast, lead off hitter with power that can play incredible defense (all when “healthy”) Jay Bruce obviously aint that guy. He’s actually a lot like Curtis Granderson. So the Black Jason Bay is like the White Curtis Granderson, if  you’re keeping score at home. He’s a lefty in right field thats gonna bat like .260. But right now he’s triple slashing .257/.341/.486, and has 17 HRs, 23 doubles and 59 RBIs, which, like it or not, would make him our best hitter. Take Gomez out of your brain, and just think about the offense we currently have, the improvement Bruce would bring, all while remembering this team ordinarily needs to only score 4 runs to win. Unless there’s a rain delay in the bottom of the 9th.

Also, I recognize that moving Granderson to center, sitting Lagares and rolling with Cuddyer/Grandy/Bruce aint exactly the best defensive OF unit. But 2 things – 1) Juanny Beisbol is playing hurt and his defense hasnt been that good. Its not like you’re sitting down his 2014 glove. And 2) When your offense is this bad you cant be worried about outfielders defensively. Need them swinging sticks.

2. Giving up Zack Wheeler is fucking weird. I am having a hard time understanding why other teams are ready to deal some pretty significant names all for a guy who is smack in the middle of a Tommy John surgery that was actually more complicated than the average TJ injury. Of course I understand the notion of betting on a guy long term and Wheeler has a chance to be a stud. But his call up to the Majors was lackluster. Mets fans never wanted to admit it, because we were giving him time to develop, Which is fair, but if we’re being honest he never “popped.” Not like a guy like Syndergaard is. I understand thats a VERY high bar to set, I’m just saying even before all these trade talks, if you asked me the God’s honest truth, I would say Wheeler would have ended up being in the middle of the pack with the Mets new rotation.

Now, middle of the Mets rotation can certainly be front end for other teams. I’m just saying this is weird. He should be ready for 2016 but as we’ve seen with Harvey and Strasburg and others, you probably cant expect a fully healthy Zack Wheeler until 2017. By that time he’s turning 27. You’re trading for a dude who’s not gonna be himself for 1.5 years? And when he finally pans out – whether hes a 1 or a 5 – he’s approaching 30. Now, none of that is terrible by any means. I’m just saying this is bizarre that hes a centerpiece of a trade.

3. If this happens, the Wilpons make zero sense – Jay Bruce makes 13 mil next year. Club option for the following. He makes more money than Carlos Gomez. So we all learned the truth that it wasnt Carlos’ hip that held up that trade, but really his money. Now they want to take on a guy who’s a lesser performer but costs 13 million? No. That makes no sense. Which is why this probably ultimately wont happen. You could argue that Gomez is a Boras guy and maybe Bruce (and some of his “vast inconsistencies”) would be cheaper to maybe re-sign long term? But you’re wasting your breath. They are cheap, this is probably smoke and mirrors, and wont happen anyway.

4. If its just Bruce for Wheeler, no other Mets prospects, I ultimate do the deal. I dont love the deal. I dont hate it. Pretty indifferent. If Wheeler turns into a stud for Jay Bruce, that SUCKS. You give up a stud for Tulo, fine. I can swallow that. If 2017 Zack Wheeler looks like he was as originally advertised, the Mets obviously lose on this deal. But, like I said above, he’s either out or going through the TJ recovery for 1.5 years. The Mets need offense now. And just making this lineup a formidable lineup actually is a HUGE step. I’m not saying Jay Bruce makes the Mets contenders, but if he helps bring things together for the team offensively, anything is possible with this team. And obviously since Wheeler is injured you’re not affecting the current make up at all. Its like for the next 1, 1.5 years, you get Bruce for nothing. After that remains to be seen if you made the right decision or not. But as for right now, when this team is LOADED with pitching and every other prospect has panned out, I am certainly OK with trading the one prospect who’s very injured in exchange for a former All Star bat. Again, Jay Bruce aint Roy Hobbs. But its a deal I am ok making.

Gomez, Bruce, Cespedes, Upton, etc etc the list goes on and on. A year where it seems there are more bats available than ever and the Mets – who have the worst offense they have ever had, literally – are finding problems or hang ups with all of them. Why? Because the Wilpons are cheap. AS ALWAYS. They give the illusion of wheeling and dealing and then back down because they dont spend money. It happens every time.

6. None of this matters the Mets will break my heart one way or another, with or without this deal.