We are back with another episode of 'The Falcon and the Winter Soldier' on Disney+ following a record-breaking debut episode...

...but it was also an episode that I said I really didn't love all that much. Was it terrible? No. Did it do anything to move the needle for me? Not at all. But, could it improve upon the first episode?

HERE IS A VIDEO BREAKDOWN FROM KENJAC

WAS THE SECOND EPISODE ANY GOOD?

The answer is a big ole yes!

I loved the second episode of 'The Falcon and the Winter Soldier', and I quickly realized what made the follow up to the debut that much better: Sam and Bucky were together in the episode.

That's really all it took for me to buy into the story and tone of the show. The first episode felt a bit fractured in terms of both of those things, as well as the pacing, but it all seemed to mesh much better the second time around. While patience is key for Marvel series vs. their movies, there are still only six episodes of this series, so patience doesn't work for that long!

While this show isn't going to be the fresh, out-of-the-box style we got with "WandaVision', or likely 'Loki', it still feels like the enjoyable Marvel Cinematic Universe we know and love, and the more of the buddy-cop duo we get with Sam & Bucky, the better.

There weren't an insane amount of Easter eggs in the first episode, but we got enough references to discuss! 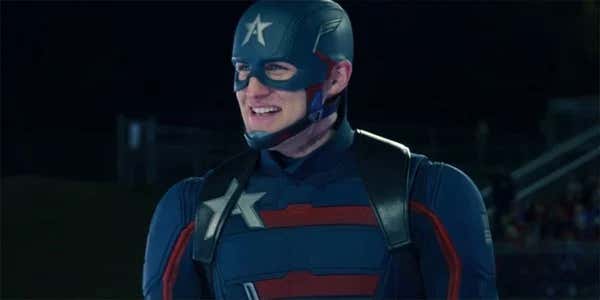 There he is, in all his glory, the new Captain America.

Wyatt Russell (son of Kurt Russell, who was also in the MCU as Ego in 'Guardians of the Galaxy vol. 2') now dons the shield after Sam Wilson refused to take up the mantle from Steve Rogers. Walker was an incredible soldier, becoming the first person in American history to win three Medals of Honor. He is worthy of the throne when it comes to sacrifice, but should he really be Captain America?

Whether he should be, or not, one thing that can't be denied: they repurposed Cap's old song!

Walker ran out onto the field of his old high school football stadium as he did a "reveal" interview on Good Morning America (a show I won two Emmys for, that's right, people don't forget I am 25% of the way to achieving the EGOT). 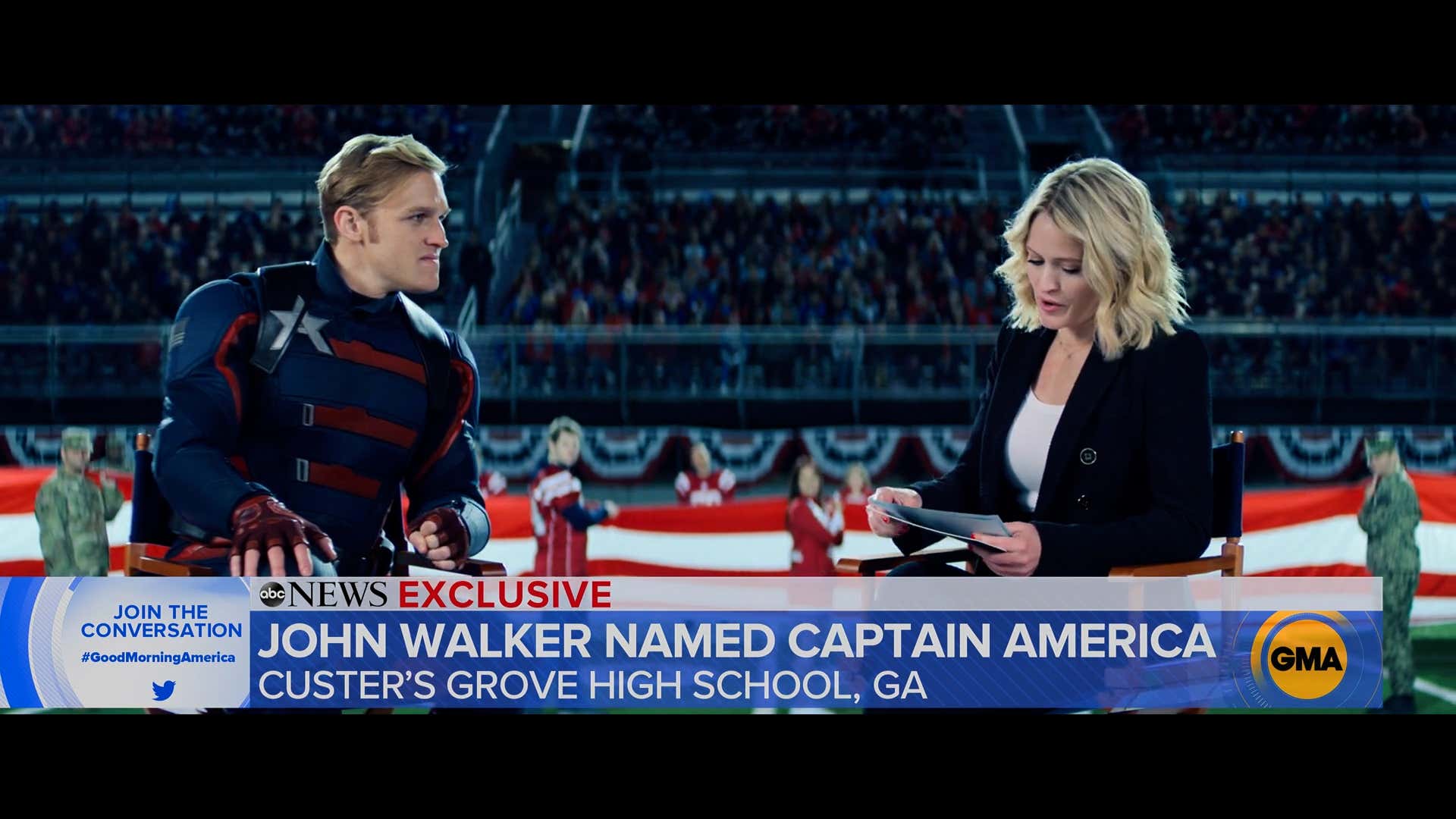 Shoutout to the wonderful Sara Haines on joining the Marvel Cinematic Universe today with her cameo in the GMA segment of the episode.

John Walker might be courageous, but we learned during his freeway fight that, while he has the magnetized shield, he does not have super strength… 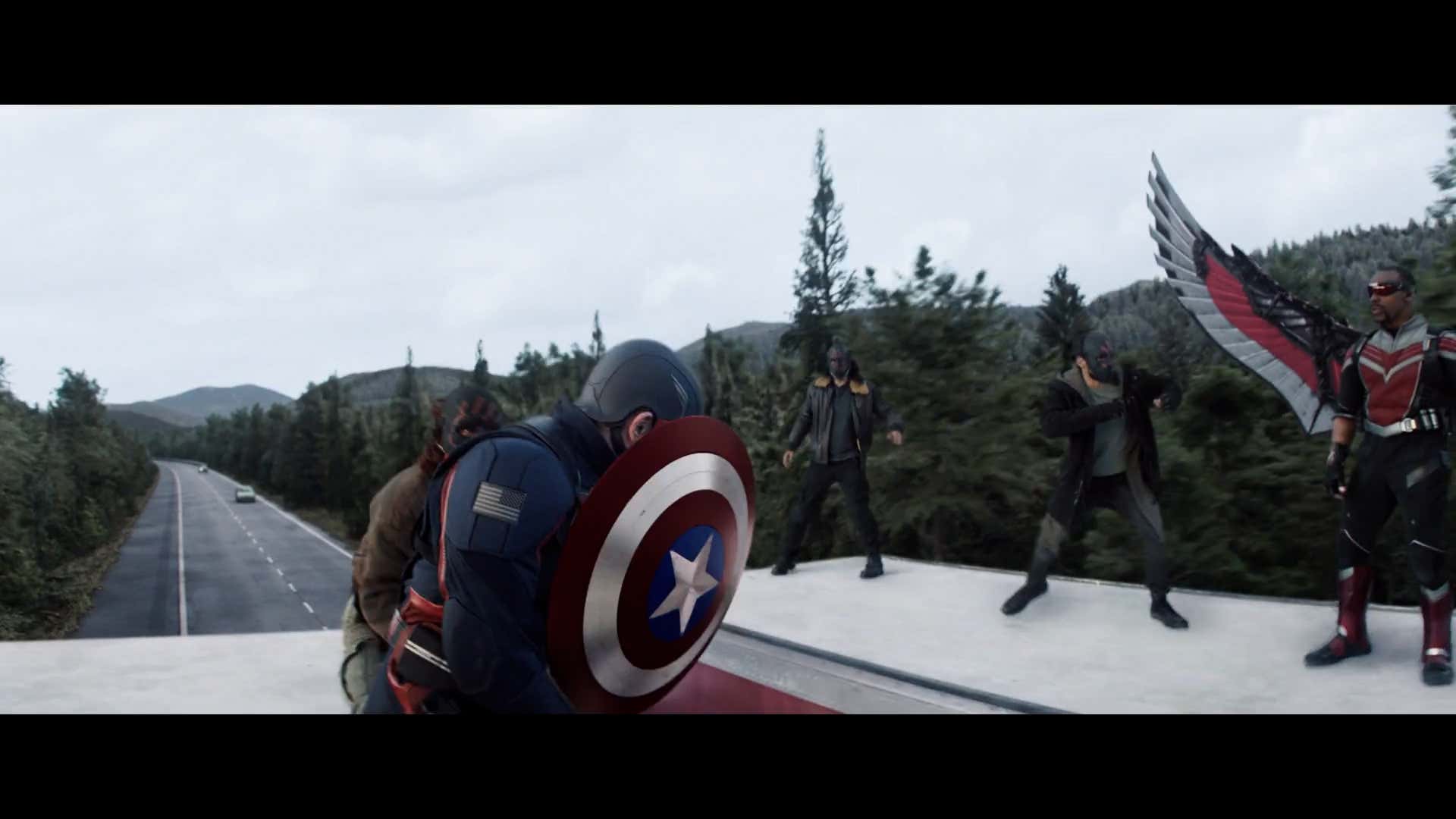 He held his own, but I mean… this guy stinks!

NOTE: He also uses a gun… 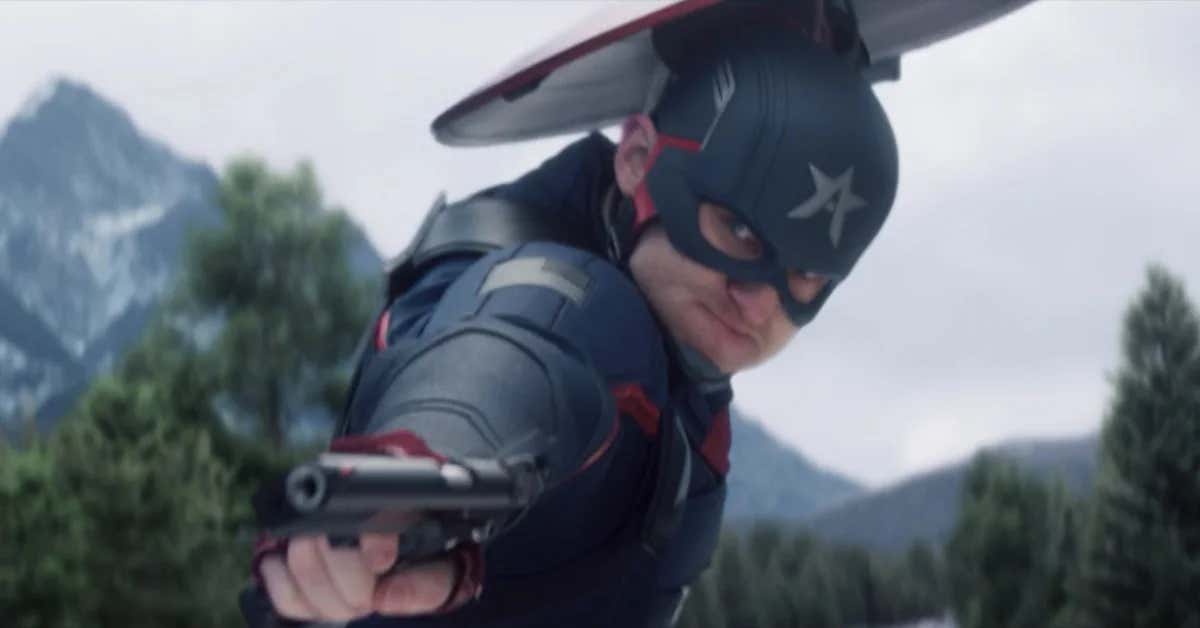 Cap is rolling over in his retirement community! 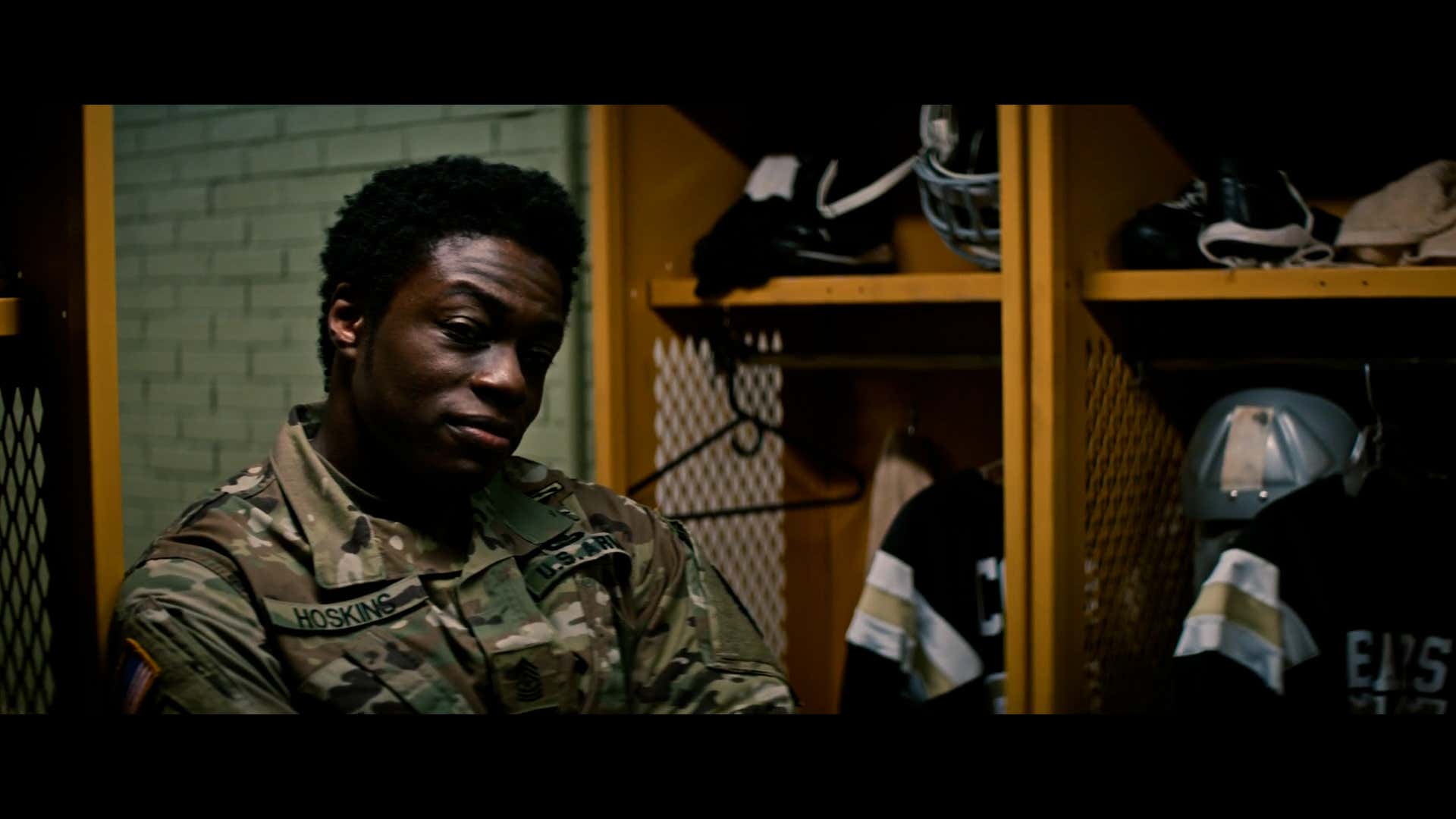 Here is some more about the character from HITC:

Lemar Hoskins began his journey in the Marvel comics as a former soldier from the US military who, alongside John Walker, subjected themselves to the Power Broker – where they were given superpowers for a price – in order to take on superhuman abilities.

Together, Lemar and John became members of the Bold Urban Commando team, nicknamed the ‘Buckies,’ who used to take on dangerous secret missions.

…as we got two this episode (more on the second momentarily), paired with Joaquin Torres from the first episode.

3. Karli Morganthau and the Flag Smashers:

We met the leader of the Flag Smashers and, yes, they have super soldier abilities! 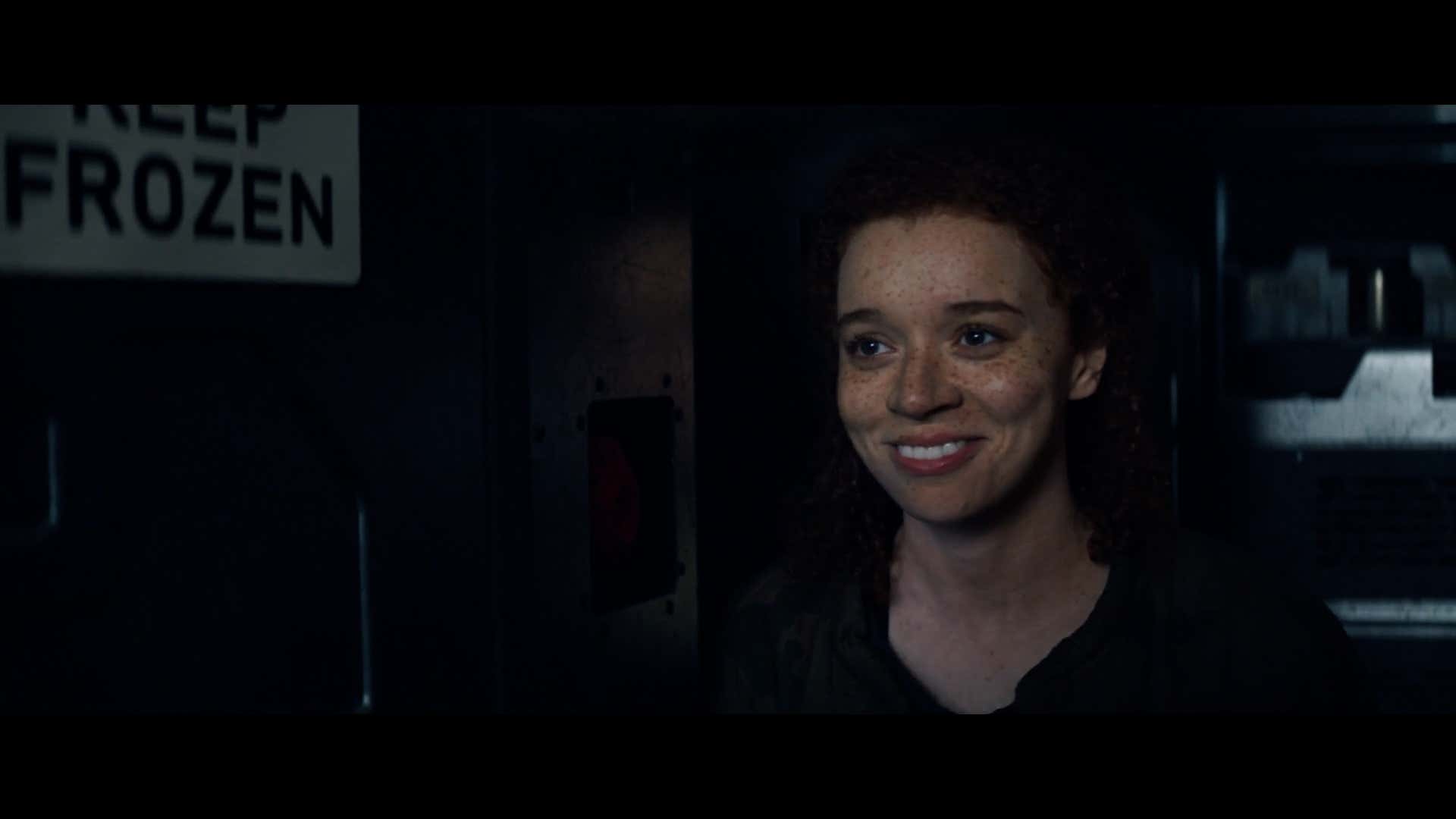 Known as Karl Morgenthau in the comics, Karli is leading this group that thinks things were better after the Snap and before everyone blipped back! They're basically Thanos fans! They feel as though people who had to live through the dire situations of the five-year post-Snap world have been neglected following the Blip. 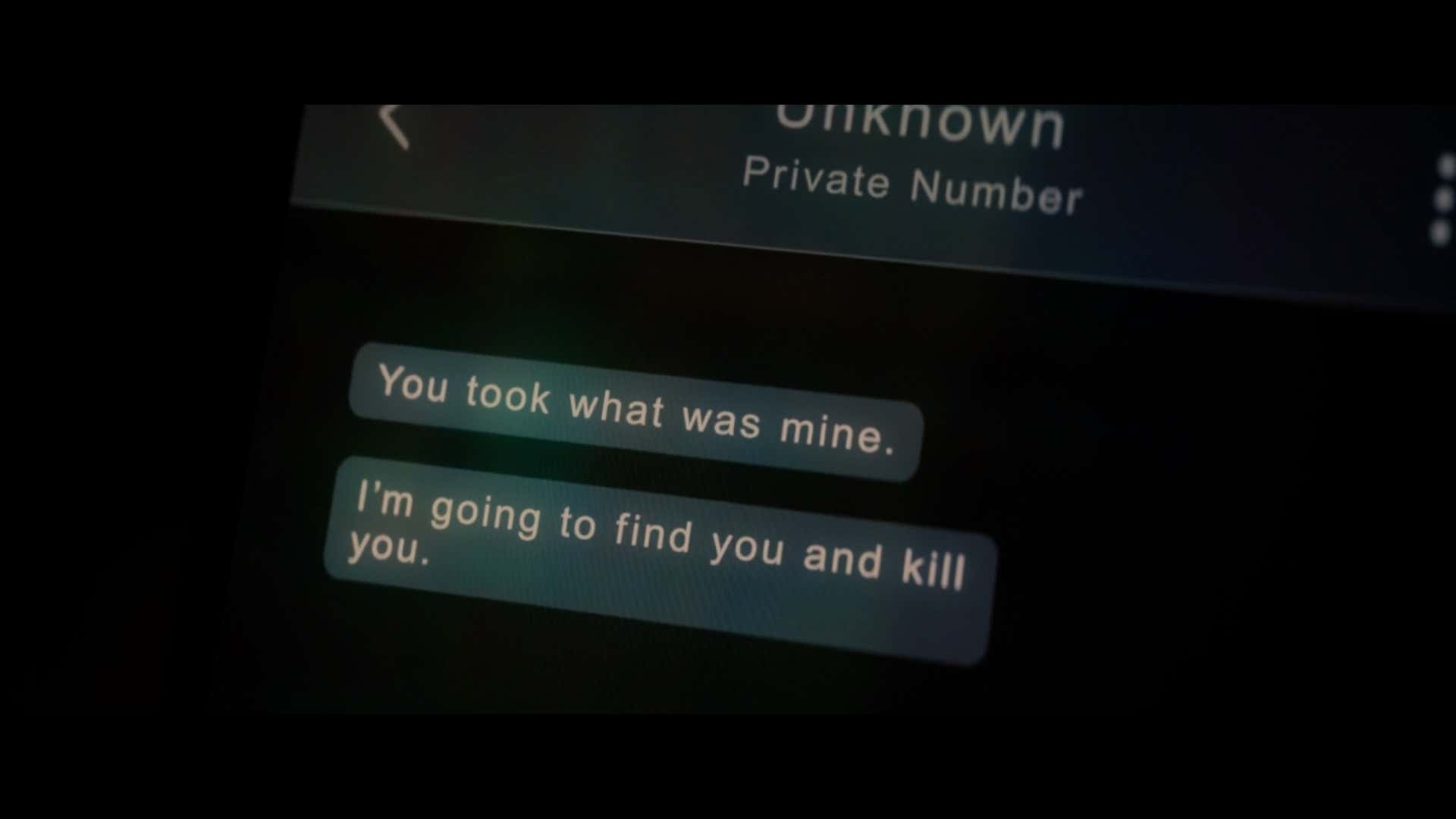 What did she take?

This leads me to believe she took someone's super soldier serum, but whose could it possibly be? With Baron Zemo clearly in jail, it has to be a character we haven't met just quite yet.

This was the biggest reveal of the episode! 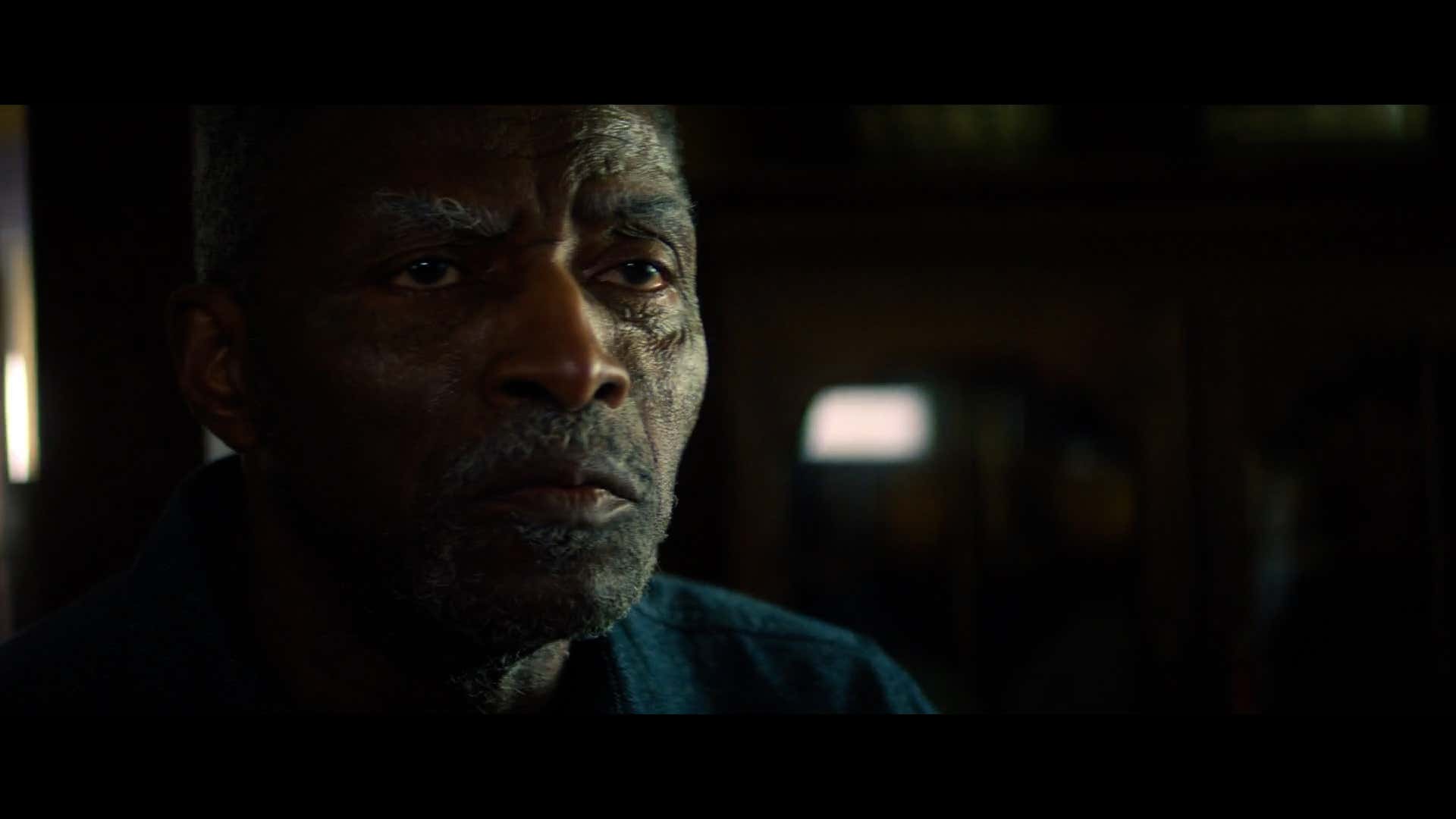 Here's the explainer from the Marvel Fandom page on the reveal that Isaiah Bradley is in the MCU:

Isaiah Bradley aka the Black Captain America was one of 300 African-American soldiers who were used as test subjects at Camp Cathcart as part of the Project Rebirth's attempt to recreate the Super Soldier Serum. Bradley was the only survivor who took on the mantle of Captain America traveling to Europe to fight in the war. This was seen as treasonous by the military, who sentenced him to life in prison as punishment, although he was released after 17 years. His legacy remained a secret to the world at large but became a legend and a hero to the black community. (via Fandom)

This one was pretty cool, and crazy, to see. I am not a huge comic reader, but I know of Isaiah Bradley, and realizing he was the friend that Bucky was talking about was quite the reveal. 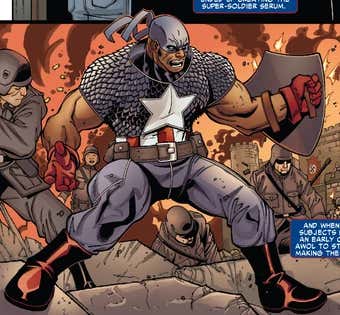 There is clearly a lot of bad blood, but you have to imagine, especially as Sam struggles with the idea of taking up the shield, Isaiah Bradley will carry a lot of weight in the pivotal moments of this series.

…and if he does, you have to expect it from his grandson Eli!

We've had a ton of teases to the Young Avengers popping up in the MCU. In 'WandaVision' we got Wiccan and Speed, the children of Wanda and Vision, we know Hailee Steinfeld is set to play Kate Bishop in the 'Hawkeye' series on Disney+, and Kathryn Newton will be Stature, the daughter of Scott Lang, aka Ant-Man, in 'Ant-Man and the Wasp: Quantumania'. Well, it's time to fold Patriot into the mix… 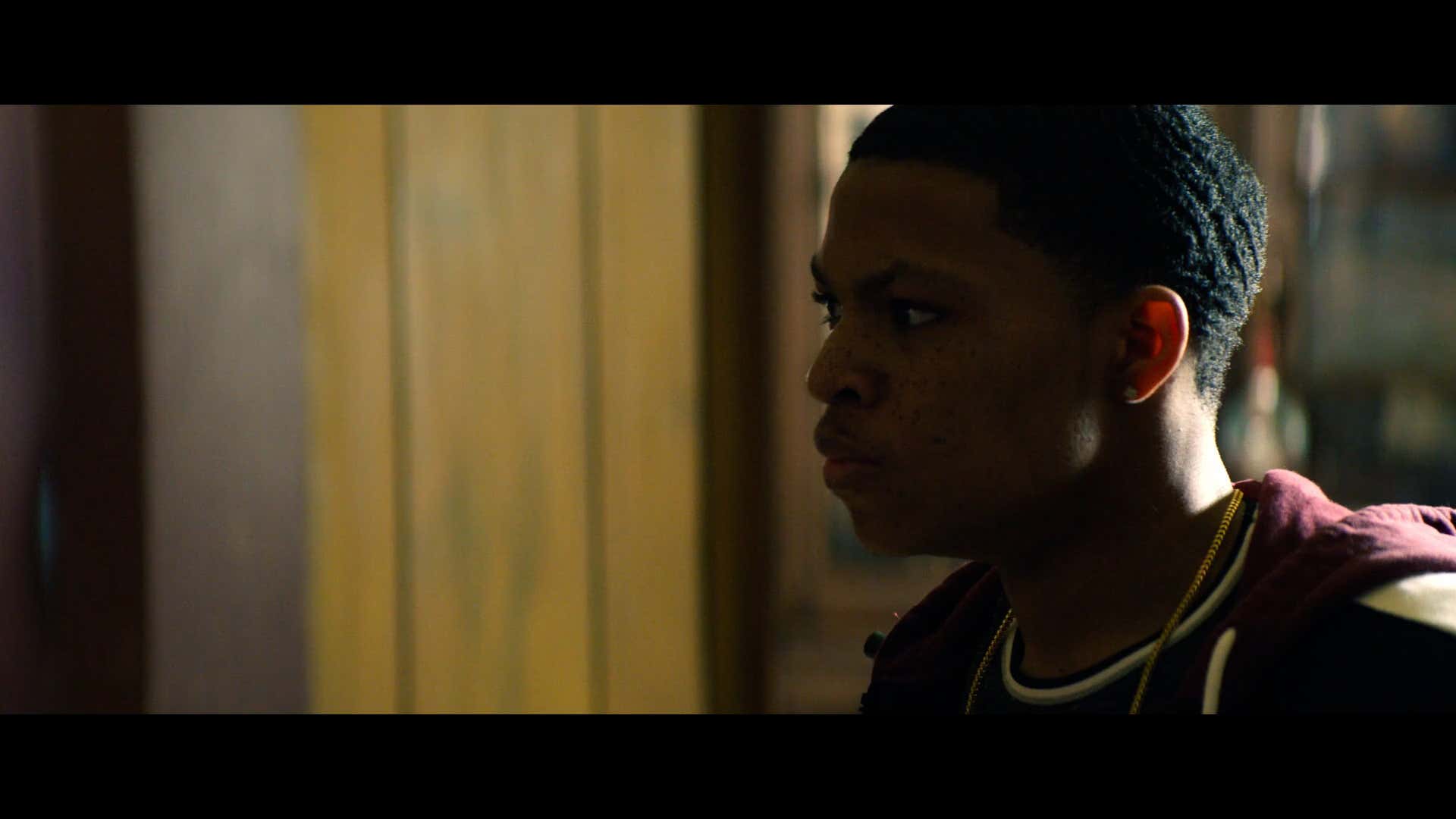 Let's do this again, this time via Inverse:

Isaiah’s grandson, Eli Bradley, played by Elijah Richardson. He’s not just related to a powerful man; Eli is a powerful one in his own right, as a founding member of the Young Avengers.

Patriot, also known as Eli Bradley. Wearing a costume closer to the original Bucky than Captain America, Eli nonetheless honors Isaiah and all he ever fought for by taking on the mantle of Patriot. At one point in the comics, he earns his grandfather’s powers through a blood transfusion.

Patriot is just one member of the Young Avengers who is currently on the MCU table. Most recently, Billy and Tommy in WandaVision paved the way toward their full-fledged superhero identities, Wiccan and Speed, becoming part of the main MCU lineup of heroes.

That's the beauty of the MCU, you just never know what character is about to pop up around the corner! 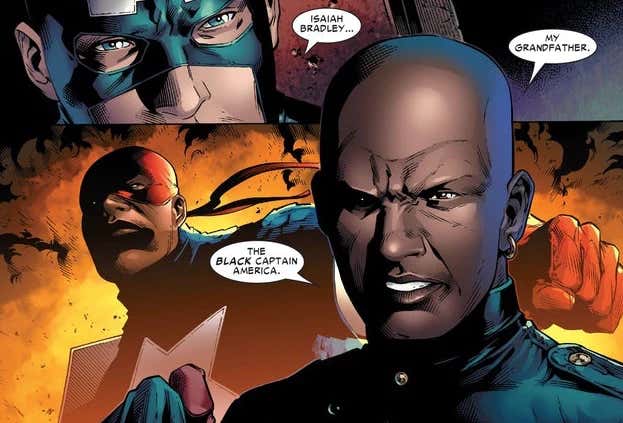 This isn't a spoiler, but more of a prediction: this series will end with Sam Wilson finding a new sidekick in the likes of Eli Bradley's Patriot. It just makes too much sense!

6. Baron Zemo is back! (…as well as Sharon Carter)

So we haven't seen Sharon Carter yet, but we did find out she got in a shit load of trouble for helping out Cap, Sam, and Bucky back around The Winter Soldier'. We do know, from the trailers, that she will return this season. We did get our first glimpse of Baron Zemo since 'Civil War'… 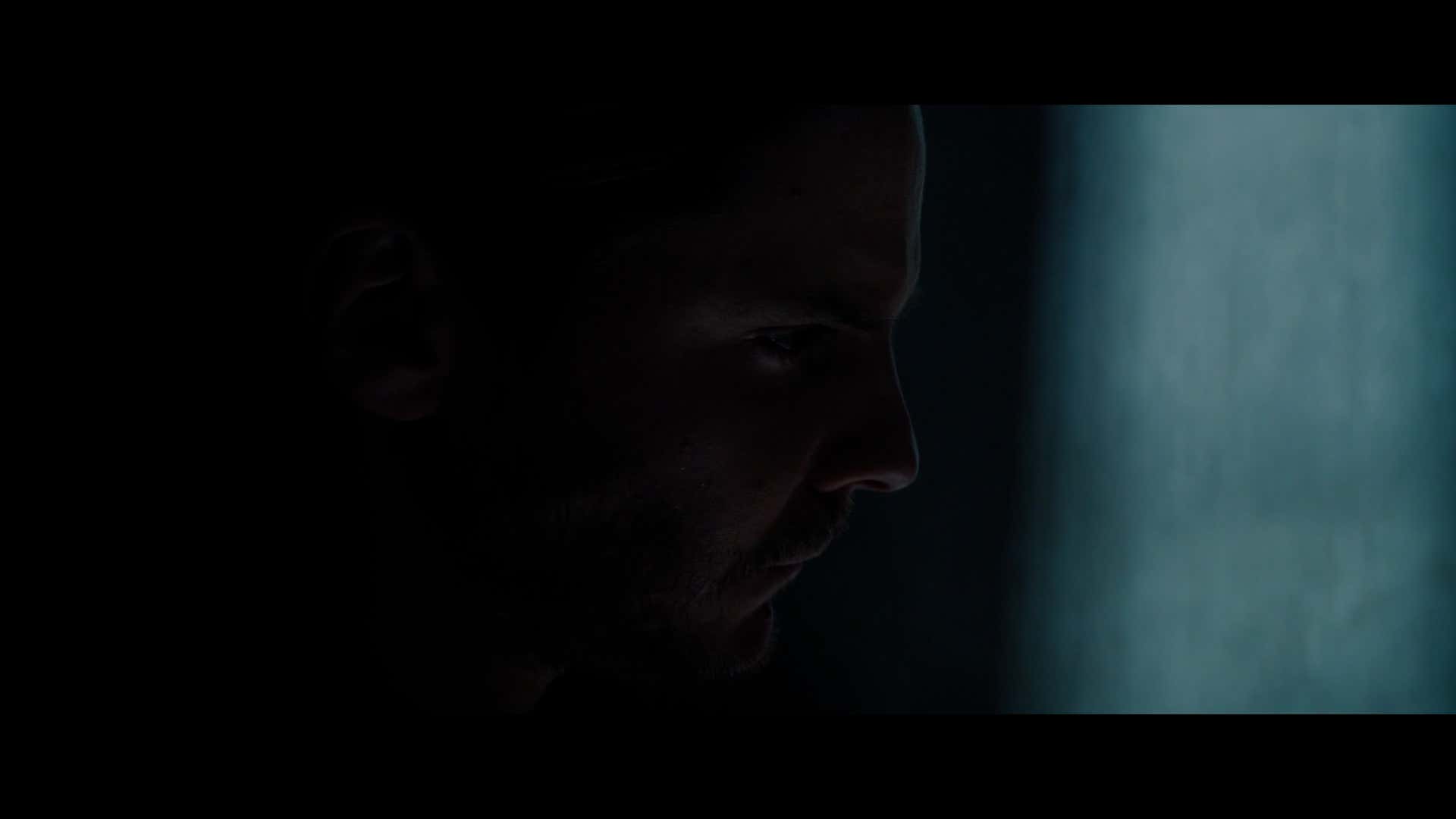 This picture is dark as hell, but we also saw a tease already of Zemo wearing his signature mask! 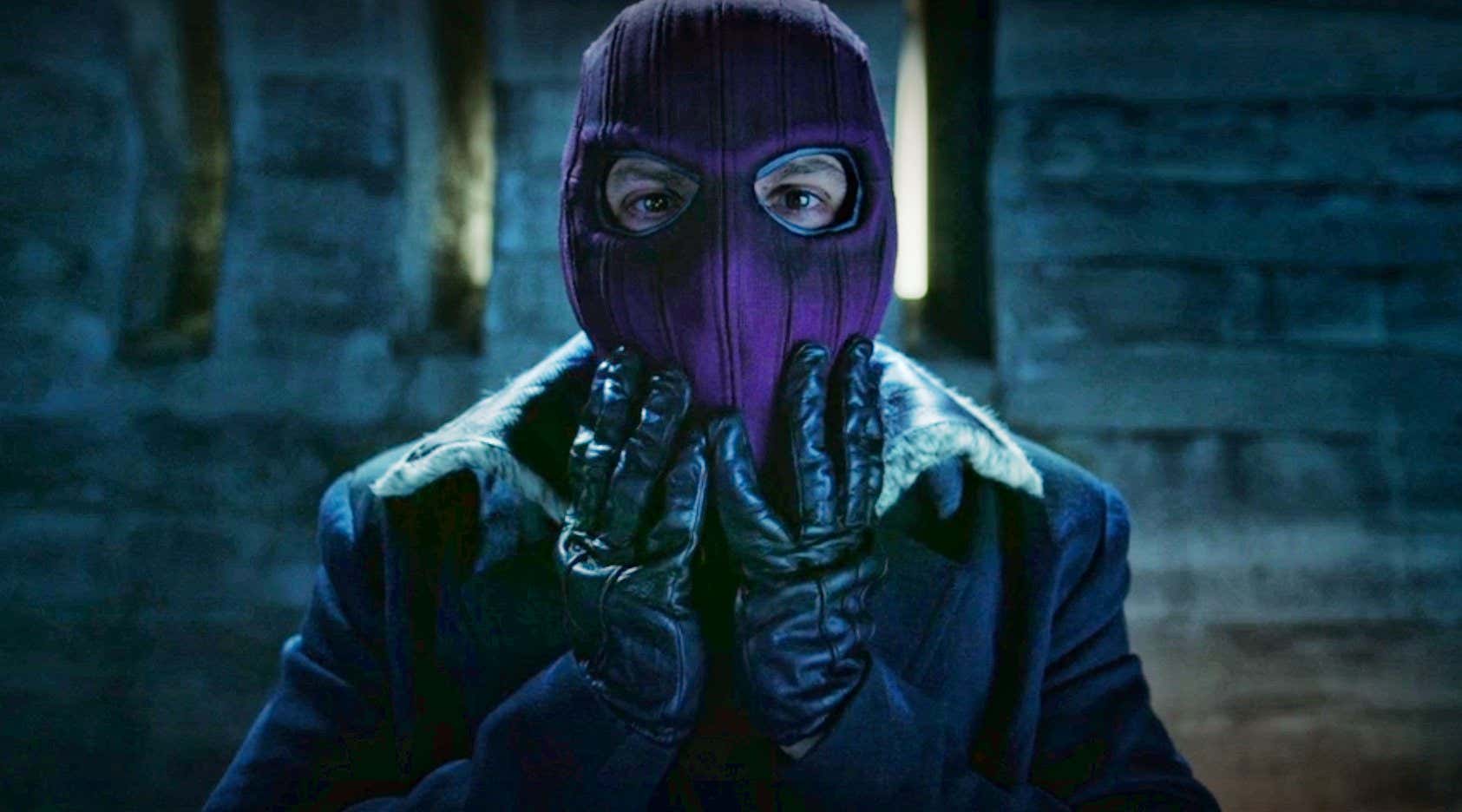 I figured Zemo would be a big-time villain, but could he be… helping our main lads? That seems to be the case.

--
There were some more moments, but I figured let's keep it simple to just the main reveals! Episode two was quite enjoyable, drop any theories and comments below.