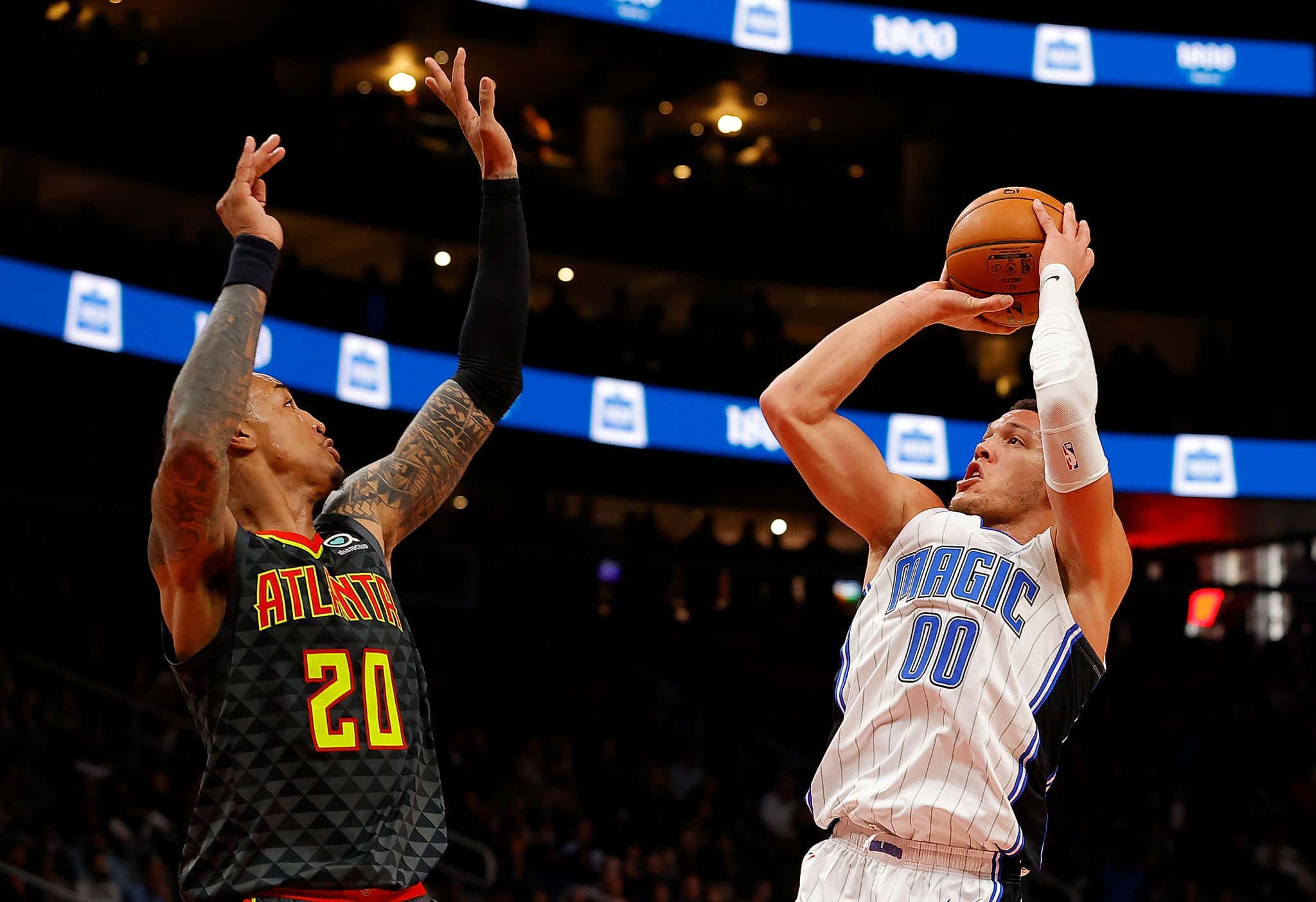 Ever since all the latest trade nuggets dropped this morning I've been thinking about this question. It's hard to know what the actual package might have to be to bring in either of these players, so that gets tricky. It sure sounds like it'll cost at least Marcus Smart, but if that's the case then you can probably find salary filler to make it work with Gordon to where you don't have to dip into the Hayward TPE since he makes $18M to Smart's $12.9M. With Collins it's not so much about making the money work since he only makes $4M, it's more about the package it takes to get him in terms of players/picks/etc.

So while all that shit is unknown, I instead want to focus on the skillsets and if they would even help. If you look at the laundry list of issues with this Celtics team right now, this might be a 5,000 word blog. I do not think that making a trade for either of those guys suddenly fixes everything and it's time to queue the duckboats. That would be silly. But there's no arguing their individual talent and the fact that their skillset can help in certain areas. Let's look at each

Remember, we're not going to worry about the package/finance shit when it comes to these guys. That shit makes my head hurt. I care about the talent and how it can help. From a talent perspective, it's hard to argue that Collins wouldn't be the most talented big on the Celtics current roster. Don't get defensive about that and yell at me about Rob. I love Rob. But he's a different kind of player. Collins is a proven 20/10 guy on good shooting splits who also hits threes.

So let's talk about fit.

As we know, the Celts love themselves some P&R. That high screen is basically the only thing they do offensively. The pick and pop game with Theis is a big part of their offense. Based on NBA tracking data, Collins would be a slight upgrade offensively in this set. As the roll man/pick and pop guy, Collins ranks in the 61st percentile averaging 1.17 points per possession on 53% shooting. Compare that to Theis' 50th percentile / 1.12 ppp / 56.4% it's not crazy to suggest that this might actually be a better option.

It's not all pretty though. Collins flat out STINKS at defending the P&R ball handler. He can't do it. He givs up 1.52 ppp and 60% shooting. That's an issue since the playoffs will just be elite guards P&Ring this team to death. He's also bad at defending the roll man, coming in at the 25th percentile. For comparison, Theis is in the 65th percentile.

In terms of spot up shooting, it's a wash. You're not getting anything from Collins that you aren't currently getting for Theis. But what Collins does give you is someone who actually has Post up offense. That's something this team has been missing since Kanter departed. Right now all they really have is Tristan Thompson maybe converting on a little jump hook. What they don't have is a reliable post up option from that position. Collins shoots 51% on post ups and ranks in the 68th percentile. Think of how many possessions we just need to see the Celts get something easy and not rely on jump shots. In theory, Collins gives you flexibility there.

So offensively, we see Collins address a couple issues. He's an upgrade in terms of P&R scoring and gives you a more consistent post up presence that this team does not have. That's the good news. The bad news is he doesn't do shit to solve your defensive issues, which the Celtics currently have. If it also takes Marcus Smart to get him, you can see how that might make things complicated. Not only are you losing stuff defensively at that position, but you're also losing perimeter defense.

I will say this though. Collins is pretty solid in the clutch. He shoots 44/50% (on low volume) in clutch situations and as we know the Celts need all the help they can get once they find themselves in those situations.

The thought would be that once he gets into this system, that he can develop as a defender. You just have to be sure that whatever he gives you offensively/rebounding is worth the drop on the other end. If we're talking about this team turning things around, what is more important to you? Do you care if you're offense improves if you can't stop anybody? It's a tough question but then again they aren't stopping anyone anyways so maybe you roll the dice.

Gordon is fascinating to me. The Magic haven't really done a good job of building the right team around him, so he's sort of an unknown in terms of what he can be. His three point shooting came out of nowhere this year now at 40% on 4.4 3PA, and if that is here to stay it certainly makes things interesting.

He's different from Collins because to me he's a little more of a point forward in that you feel more comfortable with him creating off the dribble. But what he CANNOT do is score in isolation. He ranks in just the 7th percentile shooting 26% in isolation offense. The last thing we need is someone who does a bunch of Iso yet stinks at Iso. He basically runs it just as frequently as Jaylen.

Gordon also sort of stinks in initiating P&R, something he did 19.5% of the time with the Magic. He ranks in the 11th percentile shooting 33% as the P&R ball handler. He's basically never been used as the roll man because the NBA doesn't even have tracking data for him, so I don't love that. Especially because of how instrumental that is to the Celtics offense. He is better at defending the ball handler in P&R than Collins so that's nice, but there are a lot of questions if he is a true style fit.

Where he's better than Collins is as a spot up shooter. Gordon is pretty solid in that area coming in at the 79th percentile, shooting around 40%. The percentage isn't great, but at a 15.8% frequency he's putting up 1.15 points per spot up possession. That's the exact same as Gordon Hayward if you care about points per possession.

Much like Collins, Gordon also helps give you solid rebounding numbers. Where he differs is it looks like he's starting to improve as a playmaker which would help address a glaring need. On the flip side, Gordon stinks in post up situations. Defensively I'd say there are just as many questions about Gordon as there is about Collins. It would be aggressive to assume that end would be a positive.

But like Collins, Aaron Gordon has proven to be pretty solid in the clutch (in a limited sample). He's shooting 50/50% this year with a 113 Ortg / 103 Drtg. That's an upgrade considering the Celts are the worst clutch team in the league.

I also am intrigued on the lineup flexibility that Gordon could give you. Collins is really only a small ball 4/5. You can't have him try and guard wings. While Gordon might still have issues, I would trust him more with that. He just feels more athletic to me in that regard. That allows Brad to throw out more lineup combinations based on matchups.

So when you add it all up, what's the answer?

It's complicated. It's yes…..and no. They certainly both help you in terms of boosting your offense with guys who can theoretically score in more efficient ways. But I wouldn't say they help sure up your defensive issues, which will matter in the playoffs. When you then add in the reality that it'll probably cost you Smart, there are concerns about this team's playmaking and perimeter defense. I just don't know how much your ceiling is raised. Would anyone think they are closer to any of the top 3 in the East? I'm going to assume no. There's your issue. Both Collins and Gordon are good players who are very talented individually. I just don't know if it ends up being a more lateral move because some issues that exist now will still exist if either were on the roster.

That's why it all comes down to the package ultimately. I wouldn't blame Ainge for not wanting to give up Smart just to bring in either of those guys. But at the same time, you have to give up something to get something. There's also the question of if you see either being part of your long term plans. That's obviously pretty important to make such a gigantic change. When I think of how bad this team is in the clutch defensively, how the Jays sometimes fall into bad isolation habits and how nobody really moves around on offense, how much do either of those guys really help in those areas of need?

It's an interesting debate, and I'm fascinated to see how it plays out.