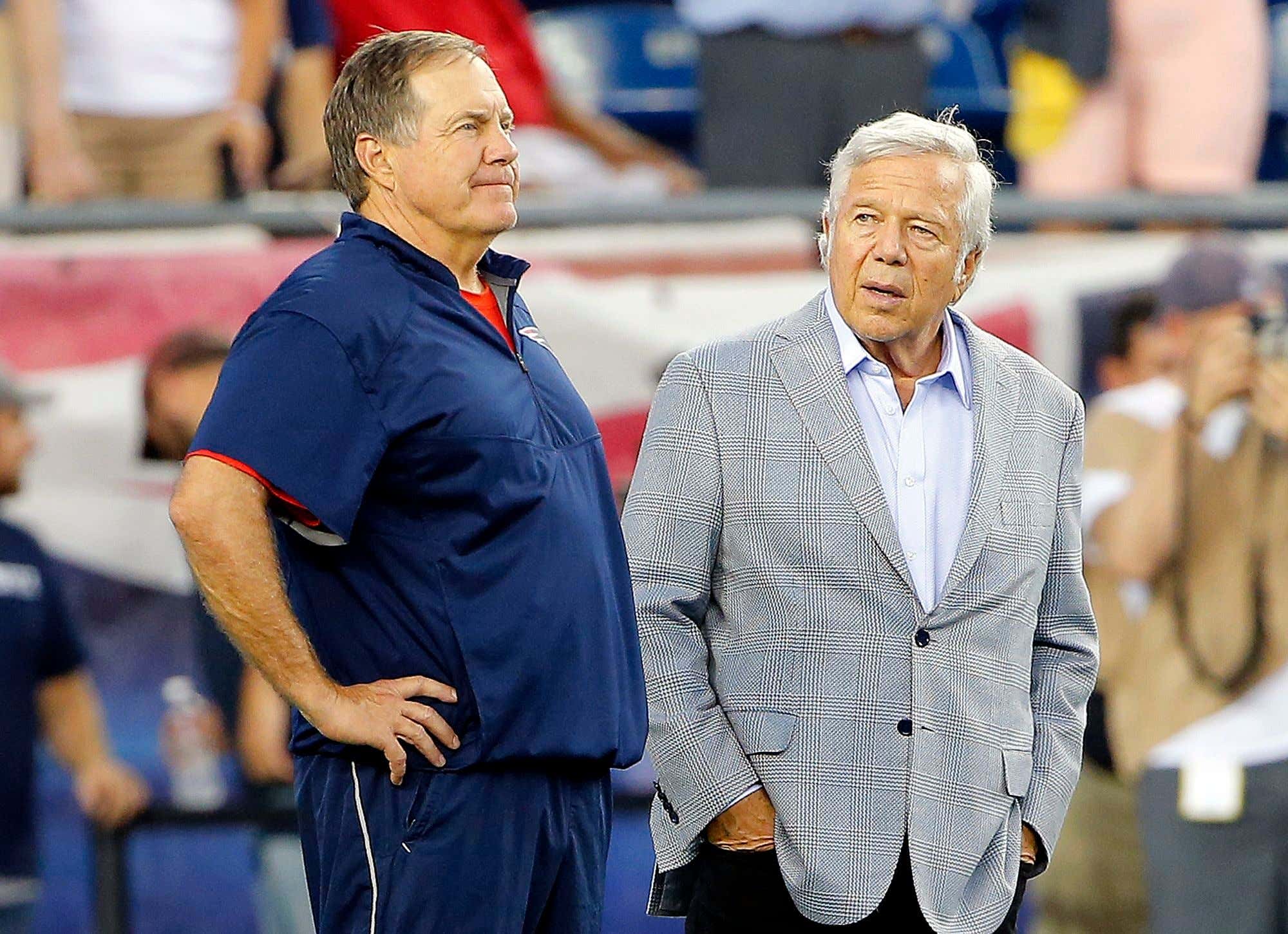 :Leave it to the braintrust of New England Patriots to dominate the news cycle for the last week and a half and absolutely obliterate the competition in the free agent market and say nothing about it beyond a few press releases. If the Cowboys had made almost two dozen personnel moves in the last 10 days, he'd be on TV more than the AT&T lady crowing about it. But the Patriots have sat back and let their checkbook do the talking for them.

Until now. Until today when we finally get some perspective from the man whose name is on the bottom right front of all those checks. Fresh from being the tip of the spear in the record TV deal the NFL just signed, the man whom some (and I am in this elite company) get to call RKK spoke to MMQB about his organization's uncharacteristic and shockingly aggressive approach this offseason.

Then, of course, came the Patriots, with their 22 moves in a week: trading for a left tackle; guaranteeing between $9 million and $32 million to seven different free agents; gorging themselves on tight ends; stealing back Kyle Van Noy; and confounding those who never thought Bill Belichick would go on one of the biggest spending sprees in the 28-year history of NFL free agency.

Why’d the Patriots do it? Because they could.

“We had the second or third-most cap room at the start of free agency,” owner Robert Kraft told me Friday. (It was third, at $69 million.) “This year, instead of having 10 or 12 teams competing for most of the top players, there were only two or three. And in my 27 years as owner, I’ve never had to come up with so much capital before.”

Kraft expended about $175 million in guarantees in two days—almost the same as he spent in 1994 to buy the franchise and a dilapidated stadium. But he didn’t sound like a man with buyers’ remorse. He sounded like a man who knew his former quarterback just won the Super Bowl in another city, and like a man who just experienced his first losing season in 20 years.

“It’s like investing in the stock market,” Kraft said. “You take advantage of corrections and inefficiencies in the market when you can, and that’s what we did here. We’ll see. Nothing is guaranteed, and I’m very cognizant of that. But we’re not in the business to be in business. We’re in this business to win.” …

What Belichick has done with this free-agent roundup is ensure the Patriots can be a factor in the division and the conference. “He went and improved his football team by leaps and bounds,” said the agent for three new Pats, Drew Rosenhaus, on my podcast this week. “I think everybody would agree this roster is incredibly improved from the one that they ended the season with.”

“We’ll see,” Kraft said with some caution. “I do remember we always made fun of the teams that spent a lot in the offseason. So we know nothing is guaranteed, and I’m very cognizant of that.”

I got asked over the weekend if I thought that all these acquisitions of all these players was the Patriots reacting to being totally pantsed by Tom Brady. And my answer was that I wish that were the case. There's something satisfying in the idea that management feels totally humiliated by his success and that they've held these highly charged, emotional meetings where they've vowed with blood in their eyes that vengeance will be theirs and all who have doubted them will drop to their lousy, stinking knees and beg forgiveness. There's something very humanizing in the idea that they're as emotional about this as I am.

But I know better. The truth is a lot less dramatic.

The approach this offseason is different, but the principles underlying it are the same as they've always been. In spite of the conventional wisdom, the Patriots spend to the cap. Whenever possible, they avoid tying up huge amounts of capital into a few star players, preferring to have a strong middle tier of players, slightly overpaying the bottom of the roster/special teams guys, while investing heavily in the lower paid positions like the interior line on both sides of the ball. It's not sexy, but Mr. Kraft's empire has been built upon a foundation of it ever since Bill Belichick came in 2000 and sorted out the financial mess Bobby Grier left behind.

But RKK's allusion to the stock market is a perfect one. When there are "inefficiencies," smart investors take advantage of them. As Belichick himself said late last year, the Pats went all in over Brady's last few seasons, went to three Super Bowls and won two. And in 2020 that bill came due. They were flush up against the cap with tons of dead money created by past deals such as Brady's. But they had a plan. They positioned themselves to be buyers in 2021. Then the cap went down because of Covid, and they were one of the few buyers in the biggest buyer's market since free agency began decades ago. And took full advantage of the advantage they created. As Baron Rothschild put it, "The time to buy real estate is when there is blood in the streets. Even if the blood is your own."

Of course RKK is right to urge caution. I haven't sat here year after year incapacitated with derisive laughter while lesser men than he handed out ridiculous contracts to former Patriots (Trey Flowers, Martellus Bennett), guys who had a good playoff game against the Patriots (Nick Foles, Brock Osweiler) or simply watching the Jets sign Le'Veon Bell, without learning the lesson that championships aren't won in March. Sound, fiscally responsible planning is a hallmark of the Patriots philosophy. Here's this princple expressed in graph form:

But again, as he said, the Kraft family is not in business for business. They're in the business of winning. And business is about to be very, very good again.