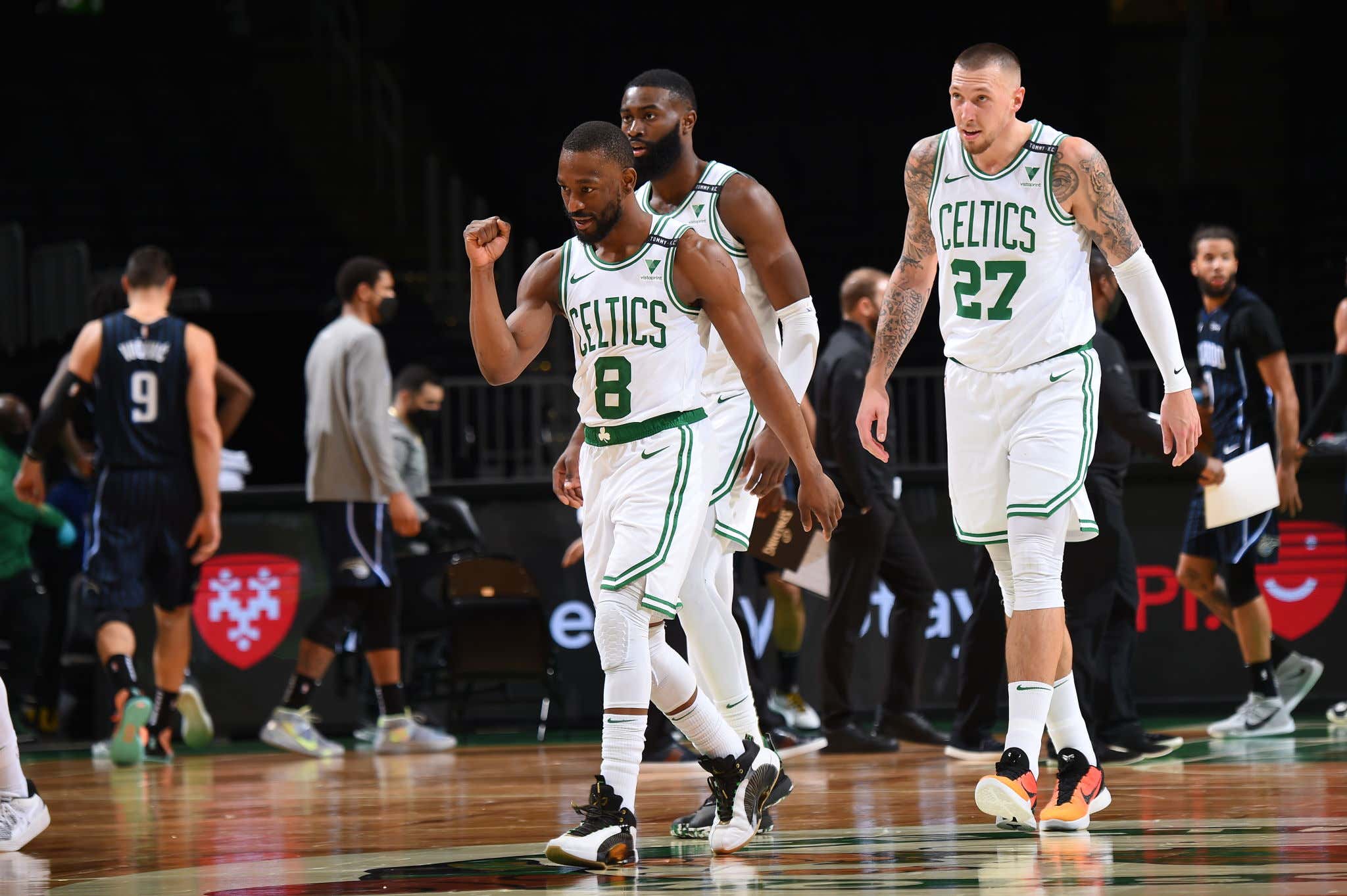 Let's just cut to the chase to start this blog. The Celtics fucking stink right now. That's where we're going to be for the foreseeable future until we witness this team put together a stretch where they stop losing to the worst teams in the NBA. Yes, they are basically a game from a 4 seed which all things considered isn't terrible, but don't let that distract you from the fact that they are 13-18 over their last 31 games. A win over the 14-28 Magic doesn't do much other than preventing me from just putting my head in the oven until the pain stops. If we're in the trust tree I don't know if I survive a stretch where the Celts lose to a 16-26 Cavs team, a 17-25 Kings team, and then a 14-27 Magic team in three straight games. Only the Celts would do shit like that so you have to understand yesterday was a little surprising. Winning a Sunday matinee against a bad team? The Celtics? On what planet??

So really, all this win did was prevent a new low. That might not seem like a big deal to you, but for the rest of us who have been watching this team so far this season, we know that it is sneaky a big deal. The Celts love doing that shit every time they lace em up. Can't stop finding ways to reach a new embarrassing low. I find it wildly annoying. So if you think I'm going to thumb my nose at beating the lowly Orlando Magic, you clicked on the wrong blog. Celts fans are in no position right now to discredit any win they can find. We need them all.

- Jaylen said it in his postgame interview, but the team collectively needed a game like this. They needed to see themselves play the right way and move the ball. It also doesn't hurt that we got to witness Jaylen turn into Steph Curry for a night. That was fun

I can't sit here and tell you I wasn't concerned with the fact that the only shots we saw the Celts take to start this game were threes, but sometimes things actually work out for you and your best players turn into an inferno from deep. Lord knows we've seen this happen against the Celts so it was a weird viewing experience to watch Jaylen erupt for 10 3PM. His 9th was the spicy one that I legit gasped at, and it's a little wild that 18 of his 24 FGA were threes. That means he only had 2 FGM that were twos and he took 0 FTA. That's not exactly what I would call sustainable offense but at the same time I don't give a shit. I just need to see him start ot come out of his little slump.

What's impressive about Jaylen's threes is they are almost never set shots. I feel like he's always moving once he's in the air with a ton coming off the dribble, his legs are always all fucked up and yet somehow he makes it. Think of where we started with Jaylen when it comes to his shooting and then watch that performance from yesterday. Wild what a couple of years of development can do.

- Then there was Jayson Tatum. All things considered, I would say the biggest thing with Tatum is the inconsistency of his effort. We know he can shoot. We're not always sure if he's going to give a shit. Well when he came out guns blazing it was pretty clear we were getting both in this game

Together the Jays combined for 15 3PM. The Magic had 11 as a team. Finally, we saw this team win a game in which the Jays had over 50+, I think their streak was up to 8 straight losses or something crazy when that happened so that's a relief. Yeah, it came against one of the worst teams in the league, but I thought I was very clear when I established that I do not give a shit.

- For me personally, I thought this was pretty much the ideal night from Marcus. His FGA were kept in check, he was a primary facilitator with 8 assists and 2 TOs, and the defense was….better. Still not the All NBA level we need, but nothing he did felt forced which is progress. I thought he filled his role perfectly and didn't try and overcompensate in his minutes.

- Yesterday was a pretty good example of the value of Daniel Theis. Not only is he becoming a reliable safety valve for everyone as the pop man in the P&R, but he was FANTASTIC defensively against Vucevic. You know, the All Star. On 28 possessions Theis held him to just 9 points on 4-12 shooting. He had him in jail for the most part.

Now his three point shooting is a complete disaster right now and that needs to change, but it was nice to see Theis be able to handle a much bigger center whose offensive game is mostly post ups/back to the basket stuff. Those are the bigs he usually really struggles with.

- When I say the ball movement was a billion times better, it wasn't just the 27 assists on 40 FGM. It was how it looked. I could watch this all goddamn day

Would you look at that! Unselfish basketball, making the extra pass to a wide open shooter and the Basketball Gods reward you! What a concept!

- It was nice to see Kemba come out in the third quarter and match Jaylen point for point to help give the Celts their separation. I would say this was another "meh" game for him. Started real bad, eventually picked it up and was ultimately fine. What I do like is this is another game where he's coming out of the half on fire and really stepping it up offensively. Lord knows this team needs that type of energy and offense coming out of the break.

- Just 9 TOs which was a relief because what do we see time and time again against these bad teams? Sloppy careless basketball that leads to easy transition buckets. Then all of a sudden the Celts are in a dogfight. Especially on a Sunday afternoon affair. Can't say I saw that coming.

- Aaron Nesmith just does stuff. It's not always good. He really can't stop fouling. But the energy and effort is always there and for a team that really needs help in that department, I still do not get why he didn't play for a month. If he hits his threes that's a bonus. At least he always seems to be around the ball trying to make stuff happen, which I appreciate.

- The 23 3PM were nice don't get me wrong. It was one of the best three point shooting nights in franchise history. But if we can be honest for a second I don't love how much the Celts had to rely on the three in this game. Nothing that has plagued this team since the break was really solved in this game. They just made their shots. I hate to break it to you, but the Celts aren't always going to make 23 3PM. I know, I wish they would too, but they won't.

Which is why things like the 9 FTA is concerning. Especially when I look and see the Magic took 30. This is now the second time in three games where we see a huge discrepancy like this. That's a problem. No starter took more than 4 FTA. The team still can't really defend without fouling. What did we see yesterday that showed up they can survive without making a shit ton of threes? Not a whole lot in my opinion.

So I would understand why someone might call this win a fluke in a sense of how they won it. I don't think that's crazy and I also don't think this changes much when it comes to solving their issues on offense.

- Brutal night for the bench, including Rob. He and Pritchard combined to be a -24, which is not what I would call good. Of the 21 fouls the Celts committed, 12 came from the second unit.

- It was pretty predictable that the Celts would come out slow in a Sunday game against a bad team, but for the 27th ranked offense to put up 31 points on 45/60% shooting in the first quarter was so frustrating. It had all the looks of another one of these types of games that have plagued the Celts since the break. Luckily their defense came around in the second quarter and the Magic did Magic things, but again, against a good team these slow starts are going to kill you. Especially on the defensive end.

- In classics Celtics fashion, we witnessed a 23 point lead get down to 8 in the fourth quarter because of course it did. You thought this was going to be an easy win? Where have you been. I find it pretty terrible that in a game where everyone should have been able to rest up for the B2B today, Brad had to put his regulars back in the game in the fourth quarter to win this shit for a second time.

We can't blame that shit on Teague playing either, he was a DNP-CD. Would it shock anyone if the Jays came out slow today? We already know Kemba isn't playing, but it would have been really nice to give the Jays some extra rest. Even if it meant Jaylen not making 10 3PM, I would have lived with it.

- This now makes the Celts 8-0 in the home whites. But sure, let's keep fucking around and wearing alternates at home. That's a good idea. Totally worth it.

So like I said. This win does nothing other than prevent the Celts from reaching a new low. We woke up today in 6th just a game out of 4th which is nice, but let's see what they do tonight in Memphis. More often than not it's been one step forward two steps back and I hold the right to be skeptical until this team shows me some actual progress.