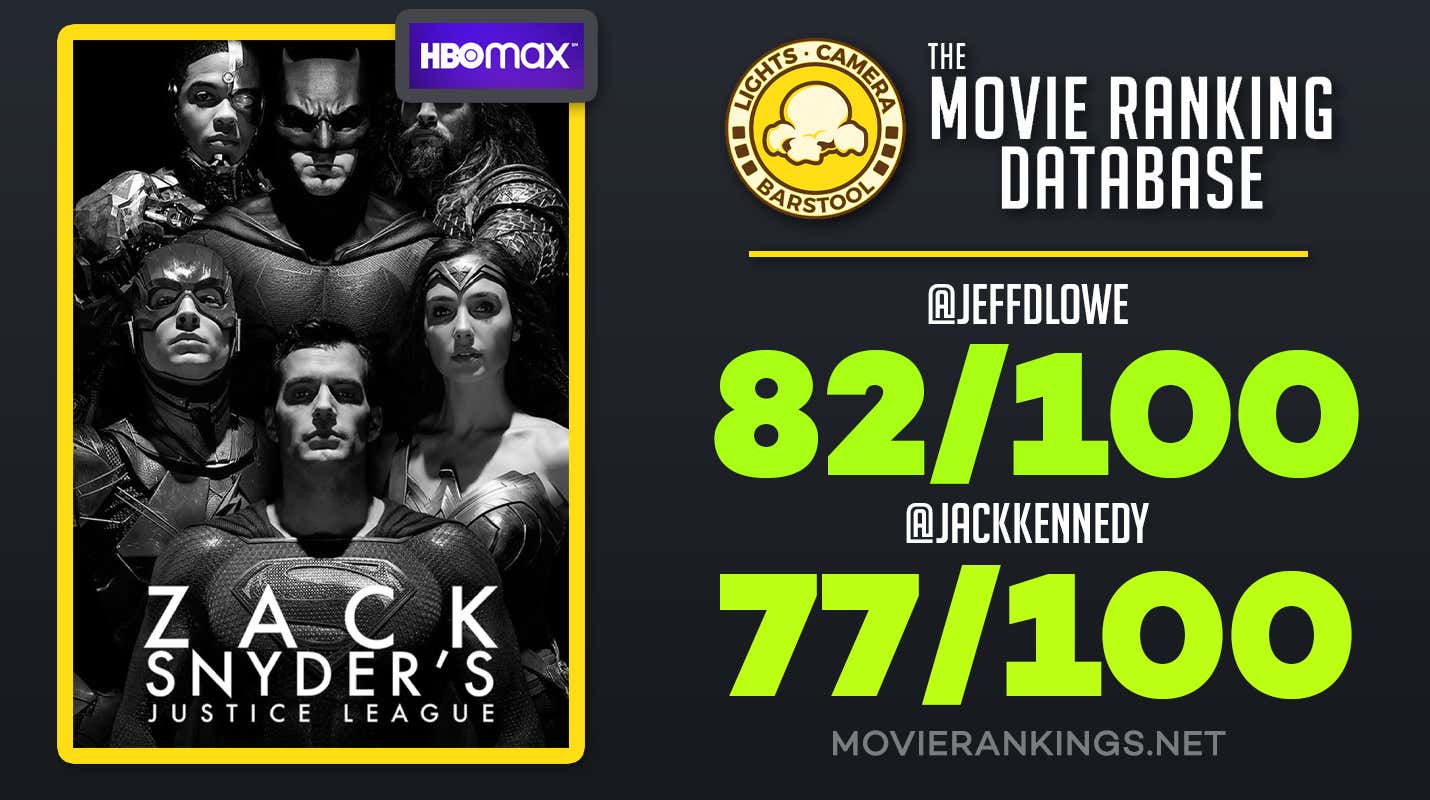 …and it was pretty fucking badass.

Fueled by his restored faith in humanity and inspired by Superman's selfless act, Bruce Wayne enlists newfound ally Diana Prince to face an even greater threat. Together, Batman and Wonder Woman work quickly to recruit a team to stand against this newly awakened enemy. Despite the formation of an unprecedented league of heroes -- Batman, Wonder Woman, Aquaman, Cyborg and the Flash -- it may be too late to save the planet from an assault of catastrophic proportions. (via Google)

JeffDLowe (82/100): Zack Snyder's 'Justice League' is a grand, epic story that rights all the wrongs of the previous version of the movie. It may be a bit bloated and long, but this logic-defying production from the heart and soul of Snyder should more than satisfy comic book movie fans everywhere. There are a handful of issues that drag the movie down a bit but considering the restraints they had to deal with in re-doing the movie, they got the most out of it as they could.

I won't lie, I don't love all of Zack Snyder's work, as he isn't exactly my cup of tea in terms of vision, but my word is it awesome to see someone execute their creative vision in (mostly) full. Yes, Snyder wanted this to be a two-part movie originally, and it shows. But given the chance to do it all together, how he wanted to make it, he hit on as many beats as I think possible.

While his work is always a bit "darker," and, in my opinion, better suited for the likes of a story such as 'Watchmen', Snyder's quote on the failings of the first 'Justice League' and the DC Extended Universe was spot on:

Could Snyder's movies use a little more heart in my eyes? Yeah, probably. Does everyone have to agree with that? Not at all. But what I think is clear to everyone is that trying to replicate Marvel's success was a foolish move from Warner Bros., and it stuck out like a sore thumb in 'Justice League'. Yeah, 'Shazam!' and 'Aquaman', for example, were light-hearted and fun, but only 'Wonder Woman' had so far nailed the tone in that Universe.

You can now add 'Justice League' to that list… the Zack Snyder version, of course. (A lot of the story outlines are the same, with some familiar scenes, but it truly feels like a brand new movie)

All of the characters are fleshed out in a far more engaging, and emotional way. The villains have a purpose in the story, and you care about everything playing out. Again, this movie is long as fuck, for sure to a fault, but it does use much of its time wisely in telling an artistic, creative, and massive story. There are some clunky parts to the movie, not everything works perfectly, and I think even the biggest fans will agree that it drags a bit in spots early on. Then, one large problem brings it down in particular, but I really can't go into it due to spoilers.

But when the movie kicks into high gear, it fucking rules pretty hard. It's also a movie I can tell will grow on me as time goes on.

This movie won't be for everyone, and some will despise it, especially those who will go into it hating it before they even press play. But this is an absolute win, whether you're a fan of DC, Marvel, or both, for comic book movies. Allowing more creativity and freedom should be the norm. Now, I don't expect everyone to get it to the level Zack Snyder got it for this new movie, because it was obviously unprecedented. However, there is no doubt in the future we can avoid seeing creative minds such as Edgar Wright leaving comic book movie projects.

Is Zack Snyder's 'Justice League' worth the watch and its long runtime? I say hell yes.

It’s here! It’s finally here! And was it worth the internet campaigning, the wait, and $70 million dollars with reshoots? Well, for DC fans, the answer is yes. And considering this entire endeavor was for those fans, I think you can call this four-hour epic a success.

The movie obviously keeps all the roots of the original movie but shaves a lot of the Whedon shit off while adding in some new elements that are pretty damn cool. Let's start with the good stuff:

Cyborg was essentially an afterthought in the original movie. Not even just compared to Superman, Batman, and Wonder Woman(all of which had movies previous to JL) but also compared to the Flash and Aquaman. He gets a WAY cooler backstory in the Snyder cut that is actually pretty emotional. One scene even had me tear up a bit! Superman is also done way better which helps a ton considering his MacGuffin-type nature relative to the movie. The action sequences are all way more violent, bloody, and just as big in scale which also rips.

Now for the bad stuff. The reshoots and new VFX are very evident, especially the latter. There are parts of it where the CGI resembles a 2010 video game which is not great. God bless Steppenwolf, they really try to make him work better but they weren’t able to save him. He definitely looks and sounds cooler, and we have a much better grasp on him as a three-dimensional character vs. a one-dimensional baddie. The Snyder cut also writes a lot of checks that I don’t think WB has any plans to cash as far as setting up future movies. This is also long, although I’ll admit it didn’t feel like it was 4 hours long. I think it might not be a terrible idea to watch it in the episodic format it’s divided up into.

If you are a DC fan, you will like this movie. It is literally built for you. For casual moviegoers, what else do you have going on? This is a big ass event and it is, at the very least, mostly entertaining.

--
The movie is Officially Buttered and fans should get excited. You can head to Lights Camera Barstool right here to listen to our latest episode where we just reviewed 'Cherry' from Tom Holland and the Russo Brothers.