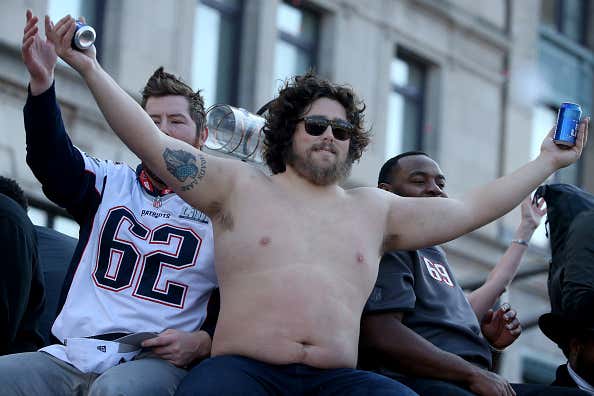 It is with a heavy heart that I must blog about this. Yes, there are sexier positions to focus on as free agency season is upon us than center. There are more recognizable and noteworthy names switching teams than David Andrews. And the economic facts of life in the NFL are always going to come into play. Nevertheless, losing this legend stings. And yet, here we are. Forced to deal with reality on reality's terms.

After six years in the organization, one season lost to blood clots in his lungs, two championships and one unforgettable ride on a Duckboat when the clock struck Shirtless O'Clock on a Tuesday in early February, Andrews and the Patriots agreed to let him test the free agent market. And while there was reason to hope he'd talk to other teams and find out the real riches are the friendships he already has in New England, he and the only team he's known will be parting ways. There's every reason to be happy for him and the opportunities he'll get from hitting the open market for the first time in his career. But it'll be sad to see him go.

Make no mistake, Andrews will go down as one of the truly great stories of the Patriots Dynasty Era. Undrafted out of Georgia in 2015, he took over the center role from Bryan Stork. Despite the fact that Stork was only in his second season and just came off starting for the Super Bowl XLIX champs, the job was nevertheless handed to Andrews and he never relinquished it. At a position that has been manned by the likes of Damien Woody, Dan Koppen and Ryan Wendell, Andrews made the Pats All Decade Team for the 2010s.

His legend only grew in an otherwise miserable 2020 as he was one of the few bright spots. Despite his medical concerns, he refused the opt out, came back, and started 12 games. And gave us memorable moments like this:

But alas, it was not meant to be. Nothing lasts forever. In this weird dynamic that's been going on between the Patriots and the Dolphins over the past few years, where they're constantly exchanging players like DL Davon Godchaux signing with New England and DL Adam Butler going to Miami, the Patriots are getting back Andrews' 2019 replacement, Ted Karras:

And I'll be shocked if by dinner time tonight, Andrews isn't rejoining Brian Flores down in Miami. I'm not arguing he can't be replaced. Just that he will be missed. I hope wherever he ends up, they pay him a million dollars a day. He's more than a survivor. He's one of the truly great UDFA success stories. Godspeed, David Andrew. dd