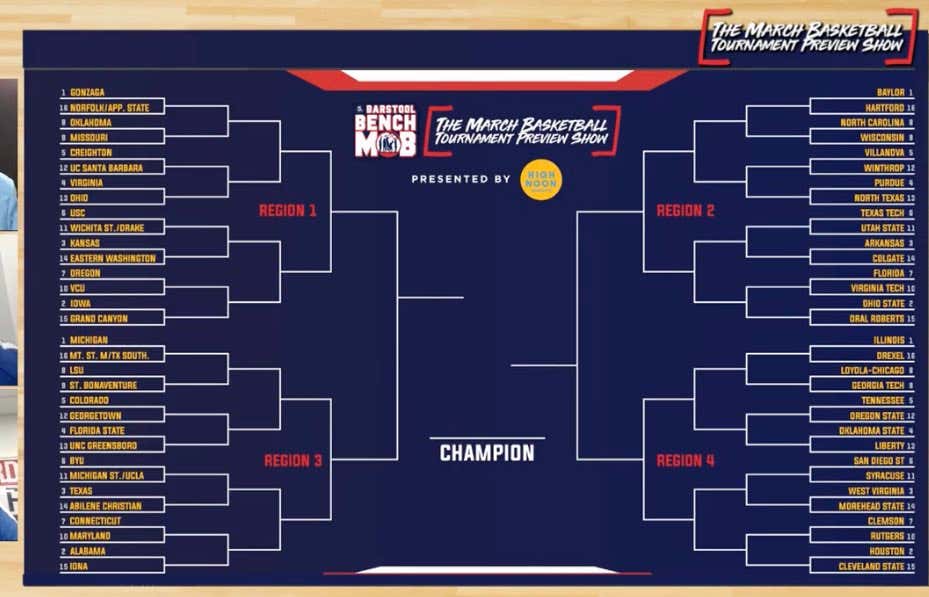 I started to get into my NCAA tournament preview last night but mostly just couldn't stop myself from blowing Brad Underwood on a large national stage. I am legitimately in love with that man and everything he has done for the University of Illinois. It's a powerful feeling and one that's distracted me in my duties of providing INSIGHT and ANALYSIS into SPORTS. (But notably it has not stopped me from pumping merchandise so don't be afraid to check all that shit out.)

T-shirts aside though there's actual basketball to be played this coming weekend and I'd be an idiot not to sink my teeth into the Illini regional conversation. So let's stop beating your mom's bush and get right into it. 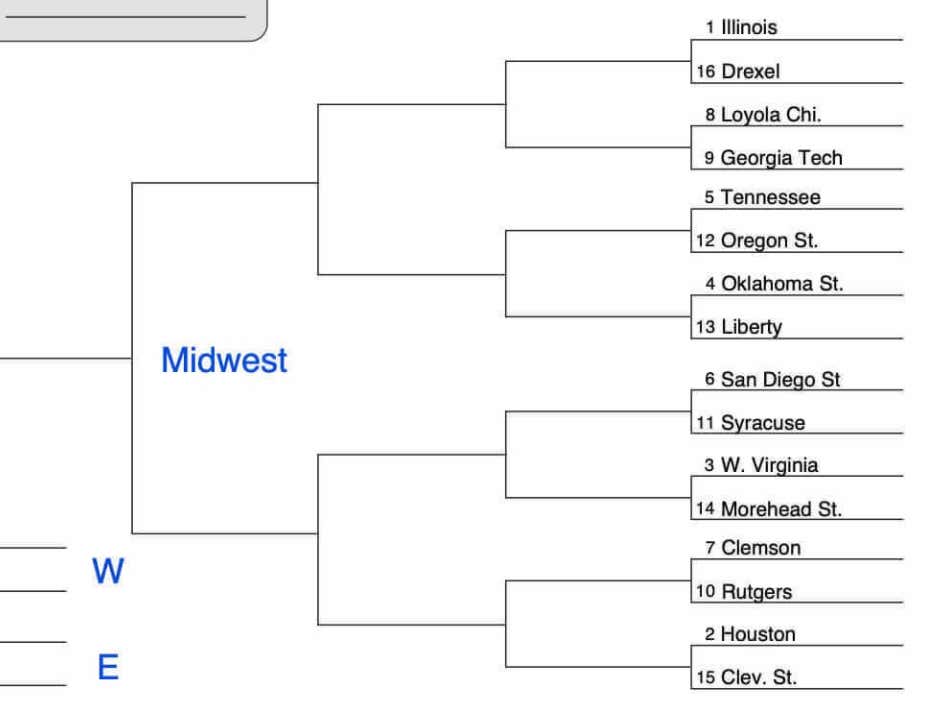 First glance and then some observations: nobody scares me in this regional. I know there are some threats on the board but nobody scares me so let's talk some shit starting from the bottom up 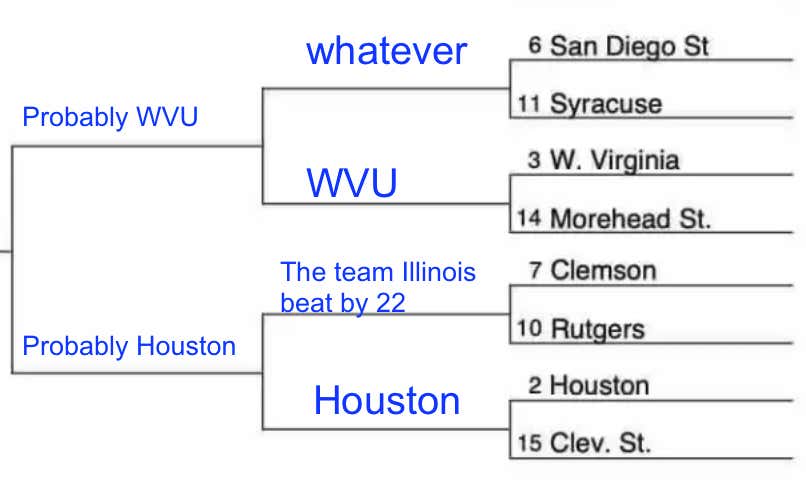 - Does anyone really care about SDSU vs. Syracuse? Boeheim should've been Old Yellered proverbially by the Athletic Department years ago. The name Buddy Boeheim plays for me and they were excellent down the stretch. But they rank 89th defensively just a year removed from being 116th. The reason coach is so pissed is because it's obvious he can't keep the 2-3 scheme running. Their lack of size offsets the chaos of the zone. They don't board, don't rotate like you need to and get absolutely destroyed by teams that can run decent half-court offense.  No I am not scared of Syracuse.

- San Diego State is bad news because their top 4 minutes come from Seniors. Of the 10 guys averaging double-digit minutes a game, 8 are upperclassmen and they account for about 89% of the squads offense. It's basically a nightmare 6-seed with a bunch of 21-23 year old men playing a boys game. Scary yes but there's a talent gap whether you want to admit it or not.

- WVU should crush Morehead St. but I don't want to be cocky. They're a flip-flopped SDSU where they want to push pace and hang points but weak defensively in the half-court. Strong perimeter but brutally weak inside and subject to an absolute drubbing from the Big Fellas should they make it to the E8.

- Clemson & Rutgers to me is a game I very much hope Rutgers wins because Clemson kind of scares me. They flew under the ACC radar this year with a very strong defense. The public would instantly take Syracuse in an even money game but to me that's a -3 line to Clemson under neutral tourney conditions. Even so give me Rutgers here because they played a harder schedule and I know Illinois can handle them by 3-4 touchdowns.

- Houston's best win all season was at a neutral site against Texas Tech. Yawn and I mean fucking YAWN. Kelvin Sampson is a good coach but he's also a flaming piece of shit that deserves to rot in hell with Eric Gordon. Such a thin schedule and weak resume but they destroyed their conference tourney and you need to show some love in a pandemic year. Whatever. I think they stink against a balanced team, and they're not that much better than WVU. Personally I think SDSU wins comfortably against an overrated Houston but that's just me.

- SDSU, WVU OR Houston would be the 3 hog mollies in the E8 for Illinois should they get there. Clemson has sneaky perimeter D that could be a problem for Houston and WVU but there's nobody here that can bang inside and bomb outside. Very weak frontcourt depth across the bottom half of the Illini region. 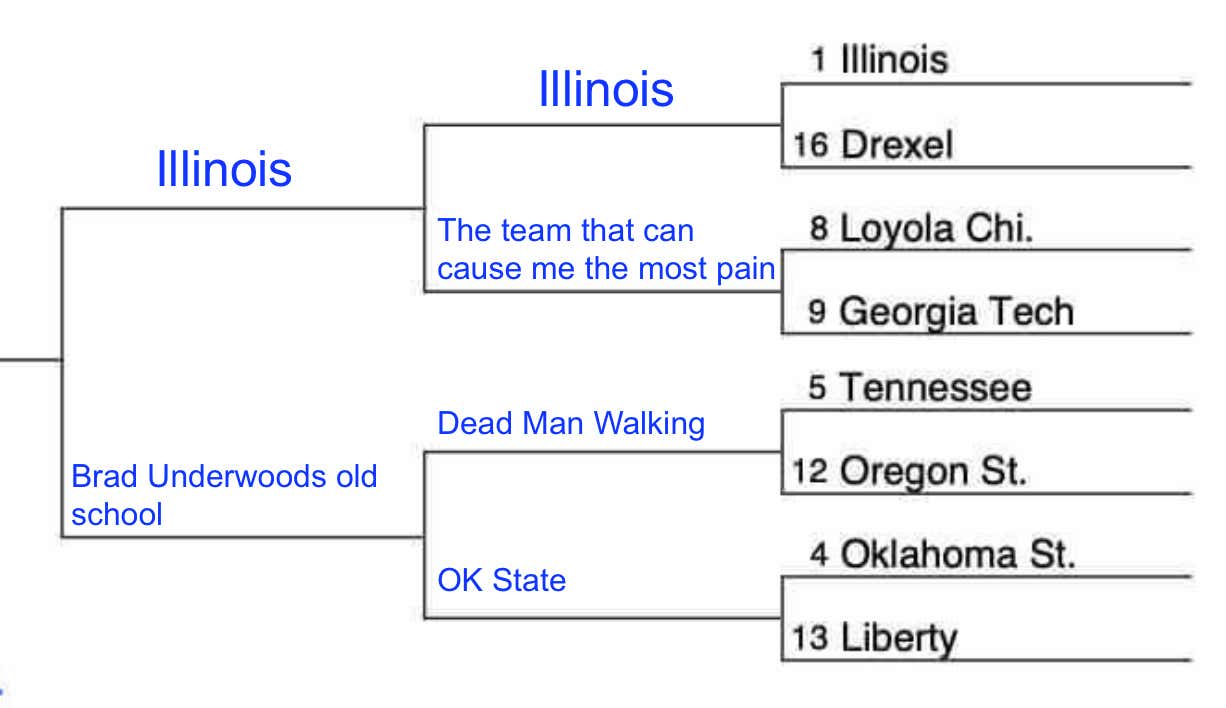 - I like Philly guys for the most part so don't take this the wrong way but Drexel might close the doors to the university on Friday when this game is done. No disrespect but you honestly have no idea what's coming for you.

- 8/9 is tough because Loyola is in Chicago and a lot of Loyola people would love to watch me die in the 2nd round. But then there's also a lot of Georgia Tech fans that caught some smoke from me over the weekend while FSU turned the ball over 30 fucking times

- Little did I know a potential 2nd round matchups with these assholes was inbound. Oh well. This is how life works on the internet. I say some harmless shit about how much Georgia Tech sucks and next thing you know I'm looking at a 2nd round matchup with them. Let's rock and fucking roll.

- But to get there that means Loyola loses and honestly I'd rather just play whoever wants to get their shit pushed in the most. To me that would be Georgia Tech because they just don't have the depth to play 40 minutes with Illinois. Loyola on the other hand has a better rotation with more trusted perimeter players predicated on getting it to Cam Krutwig and working through him. He's a beast. He makes me kinda nervous. Let's go Yellow Jackets.

- Tennessee is the kind of team that can get hot for 19 minutes then play like a JV squad the next. So unpredictable and such a bad half court offense. If they play a less talented team, they run them out of the gym. If it's a squad that can stick on the perimeter without having to help on drives, then the Volunteers are basically impervious to finding open jumpers. It's a tale as old as time in the SEC.

- Comparatively, Oregon State is an ugly Cinderella to me. AWFUL defensively and inconsistent offensively. Arguably the worst tempo in college basketball and probably the most inconsistent 12-seed or higher in the tournament. If the magic rolls, great. If not, Tennessee is walking backwards into the 2nd round or whatever they fucking call it these days.

"The Next Round" sponsored by Miller Lite actually sounds pretty good

- Obviously Cade Cunningham is coming for Illinois. That's all I've heard since the bracket got out. ILLINOIS IS SO FUCKED and yes the Cowboys are good. But you honestly think that's enough to take down this Brad Underwood squad that dummied Michigan by 75 on the road without Ayo? Come on guys get serious. Tons of respect for the #1 draft in the NBA but he's gotta go for about 40+ while everyone on Illinois turns in a dud.

- Personally I think it's up to Tennessee for how hard my Illini have it to get to the elite8. If it's Tennessee in the sweet 16 then that's a bonafide murder scene. If it's OK State, then we might have to work a little harder but really that's not a tall order.

- Would be Illinois vs. probably a San Diego State or a Houston to me. That's in my plums deeply and for obvious reasons I love the way Illinois matches up. For no other reason just look at the last 6 and tell me this isn't something we can't handle.