Spoiler alert this blog comes with a poll that's already closed. We can start there.

I put this out yesterday because I was having a lovely time in Scottsdale this weekend. I went just for a few nights to see a couple of my closest friends that snowbird out there now that we're old enough they're successful enough to support that kind of life. Naturally, wanted to find a way to get a small taste before the chaos of March Madness with Penn in Illinois opens up right into opening day of what promises to be a challenging Cubs' season on multiple levels. So needless to say it was a good opportunity for some outdoor brunches in the mid-70's and a lot of drunken college basketball. Scottsdale this time of year will do that. 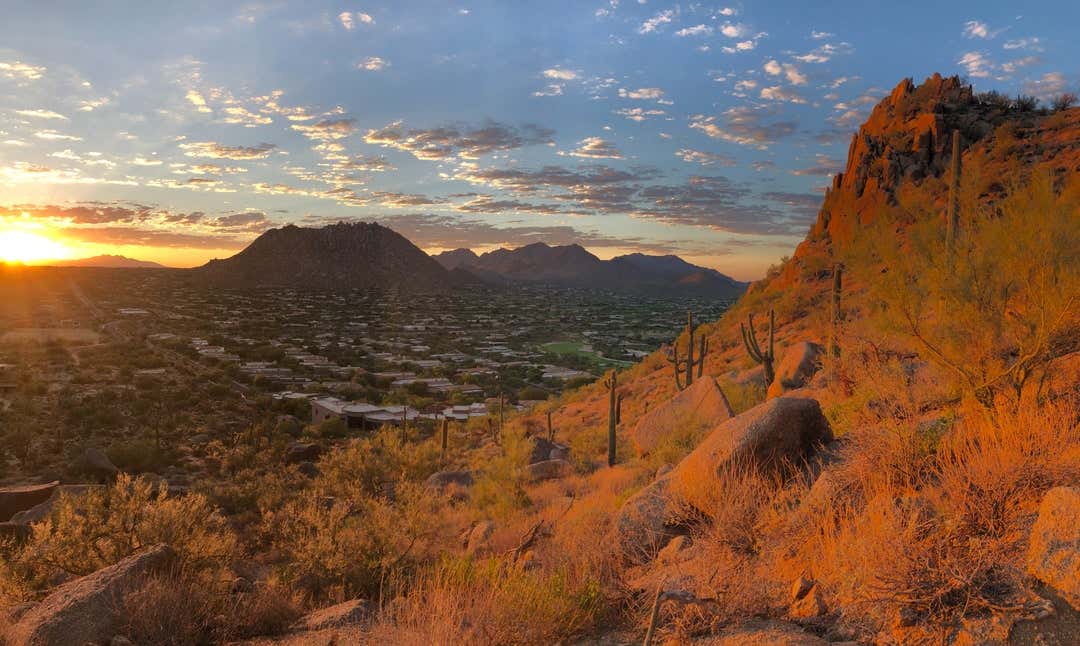 A part of the United States that looks like Scottsdale at sunrise.

But higher level I'm trying to figure out where Scottsdale appropriately ranks in my brain as a destination with the fellas to fuck around and get into some trouble. Obviously any type of statement like that should immediately start with It's Not Vegas so let's rehash that. Neither Scottsdale nor Nashville will ever supersede Vegas as the preeminent spot for a gaggle of average guys to play big or stay home.

While we're here, I've never been to Miami but I think that officially qualifies as being richer and cooler than Vegas too. Not for me personally, I'm just stacking Big Boy cities in my head. And before I say another word about Scottsdale and Nashville, I want to appropriately acknowledge that Vegas and Miami are on different levels. A lot of people also told me that somewhere swirling in the conversation is Austin but that's CLEARLY on the opposite end of the Miami/Vegas spectrum. So let's just say for purposes of this blog, over 300 words into it, that we're really just talking about Scottsdale and Nashville as two places you can get away for a longer weekend with some friends to do some damage.

Should you be richer or cooler where there isn't enough proverbial damage - I'm sorry. But if you fall closer to me where this makes sense, let's keep moving with brief tales of the tape for purposes of this hypothetical.

Nasvhille to start is ideal for Midwest and East Coast travelers because very simply, it's so fucking close. There's a ton of same-sex parties in groups of 10+ that rent large AirBnB houses walking distance from the chaos on Broadway. Off the bat that's pretty fucking sweet because there's much more of a "college-aged" vibe to your party. I think Scottsdale has a better college-vibe, but Nashville is better at sucking the younger years out of you right away. The singing. The dancing. The willingness to publicly makeout to publicly makeout. The fact you're not surrounded by absolutely gorgeous people in every bar like Scottsdale is super nice too. So out of the gate you have some really compelling vibes.

But Scottsdale has the better stretch of concentrated clubs. I'm not a club guy so don't expect me to blow this one too hard. But if you want to look and feel cool, you can't really beat bottle service when you're surrounded by extremely attractive people. It's expensive yes, but you get service right away which is a HUGE downside of Nasvhille. That's because everyone in the city of Nashville is waiting for a drink at some point. I don't care if you're at some random coffee shop, there's a row of people in front of you trying to capture and hold attention. Scottsdale doesn't put you in that position because they weed you out from the start. Bottle service people over there, the rest of you stand outside. Not that I am about this kind of life. Like I said it's really expensive but same time you're there for each other's company. Real toss up depending on what kind of social night you want but I think it's truly a personal preference that's largely dictated by age and experience.

In Nashville you're way better going out with an independent crowd that can from bar to bar. If It's midnight and there's 3 guys missing, no big deal. It's much more prone to the random and unplanned than Scottsdale and I think that's because Scottsdale has more of a "scene" where Nashville is just one big blog party. So if you mix and mingle with a guys/girls trip, make sure there aren't type A couples that NEED to be planned and have reservations. The city can work like that but you're shortchanging your Nashville experience which should very much be predicated on consolidated similar groups of strangers. Meet a bachelorette party? Make a trip to a bar across the street and try to carve out as much of the dance floor as possible. Maybe they're already talking to a bachelor party so make friends with those guys too. Buy some strangers some shots and don't even tell them why. That's Nashville and I think you can do several nights without an ounce of plans, expectations or bad vibes.

Scottsdale is going to challenge you differently. Can you keep the pack together before 1am? What if Rauri & Carl are out hunting Camel Crush cigs. What if the door guy forgets to stamp Mike's hand on the way out and wants to make a big deal about. Scottsdale wants you to be comfortable but they sure as shit make you earn it. Can't be that much overweight without standing out like a sore thumb because everyone down there is beautiful. Like I said it's crazy expensive but the service really is top notch.

Gun to my head I probably go to Scottsdale and the tiebreaker is the golf. I've aged out of going on a trip and trying to meet some random girls or just be a complete savage. That is naturally an easier path in Nashville but probably more fruitful in Scottsdale. Even so it wouldn't matter because I've aged into a dedicated happy husband that just wants to hang out with friends and have a good time. And for my money I'm willing to give Scottsdale a slight nod over Nashville in that department but not by much.

If that makes me a sell out then so be out but I really had my brain do some thinking on this one.

Scottsdale is now officially the play.