Holy fucking shit. Usually you have to cross a gang in GTA to see that many people kick the living out of a single person in a city like that. But apparently in Brazil, it takes a village to not only raise a child but to deliver street justice to a small-time crook. All of those supposed crime problems in Brazil don't seem so bad if every person is willing to become a vigilante at the drop of a hat because someone got their phone stolen. Every person in that video played a part in returning that mobile device to its rightful owner, but I wanted to highlight the three most important people that helped overcome such a senseless crime. 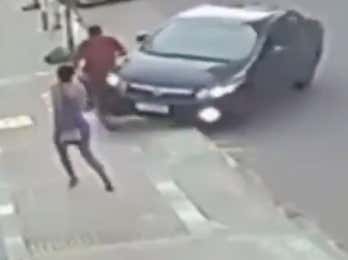 Biggest no-brainer of an MVP since Patrick Mahomes. This guy slamming his sedan into a human that he saw committing a minor crime and causing 10 iPhones worth of damage to his car is the exact type of heroism you read about in storybooks. This guy woke up and chose violence, which made the actions of everyone else in the video easier since their target was operating with essentially one leg the rest of the time.

Some voters may not put this guy number 1 on their ballot because according to aggregator sites quoting a small local newspaper, he is the boyfriend of the woman who got robbed. But I find it charming that he saw his girl getting robbed and instinctively rammed his car into the robber instead of picking her up and driving her to the Apple store instead. 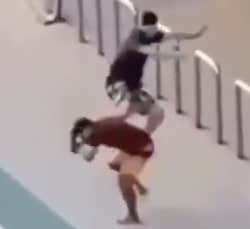 Anybody who has ever tried to jump kick someone knows just how hard it is to pull off without looking like a complete dickhead let alone dropping your target to the ground. But Brazilian Bruce Lee here not only unleashed but landed an absolute textbook jumpkick that they would be teaching in Brazillian gyms around the country if Royce Gracie hadn't made Brazilian Jiu Jitsu all about grappling and submissions. 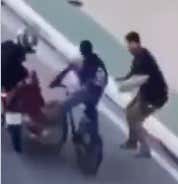 The other two fine young men on this list were clearly the stars of the show, but I gotta shout out my dude on the bike for going straight at this crook without an ounce of hesitation. Most of us would at least have the decency to slam down the kick stand on our bike before slamming down kicks on some defenseless human. But this nameless hero took his violence to go. However the most important thing he did was signal to everyone else in this makeshift neighborhood watch group that it was open season on this thief's ass and a green light to take out all their aggression on him. In any other video, this guy could be Top 2 and maybe even a surprise MVP. But a couple of kicks from a bike won't topple the two studs ahead of him on this list.