Source - Tekashi 6ix9ine does NOT believe what he did in court to save his own skin was snitching ... and he laid out his argument Thursday on "TMZ Live."

As you know, Tekashi became the star witness in his 2018 RICO case by testifying against his fellow gang member buddies ... which resulted in their conviction.

Tekashi argues it all boils down to loyalty -- or a lack thereof. He makes a decent point about beefing with just about everyone from coast-to-coast and ultimately being targeted by his own crew in what amounted to a scary stick-up job.

My God. Will someone on this guy's team please tell him to shut the fuck up? Seriously. You beat the case. It's over. You can stop talking. It doesn't matter what you say, the entire world is going to consider you a snitch from now until the end of time. It's almost like he can't come to terms with the fact that he actually ratted on his friends. Here's the full story...

You'll recall … Tekashi was kidnapped by his own security team in the summer of 2018 -- part of which was captured on dashcam video and surveillance footage. He was taken for a ride around the block, where he was threatened at gunpoint, and ordered to fork over cash and jewels he had at his NYC pad … an exchange ultimately carried out by his then-GF.

In light of that, 6ix9ine explains he doesn't owe anything to those guys … and even suggests what he did was wise. The Nine Trey Bloods almost certainly feel differently.

I agree with the fact that he did the right thing, he'd probably be dead if he didn't, but that doesn't take away from the fact that he went against the "gangster code." What a loser. As ridiculous as that interview was, having it broken up by a  Dunkin' Donuts plug really added some levity to the situation. Also, how great are Tekashi's teeth? Look at these chompers… 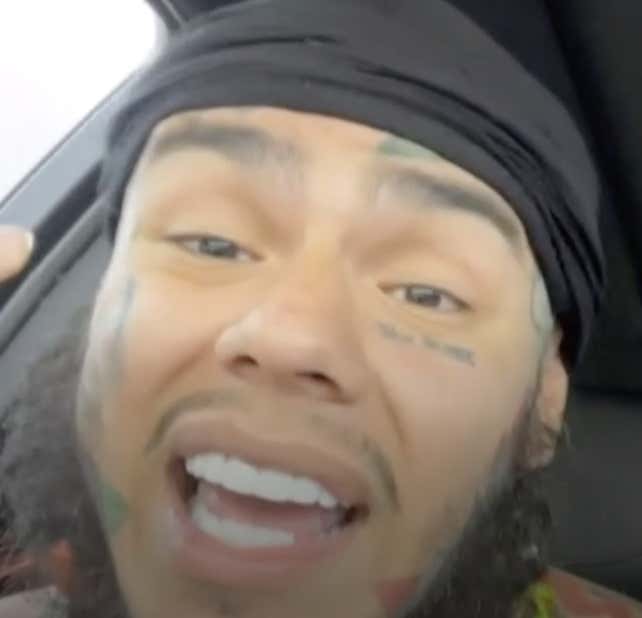 Incredible. I used to hate Tekashi but he's starting to grow on me. He has zero self awareness. How can anyone hate that? Oh well. Best of luck with the rebrand, T! You're going to need it.