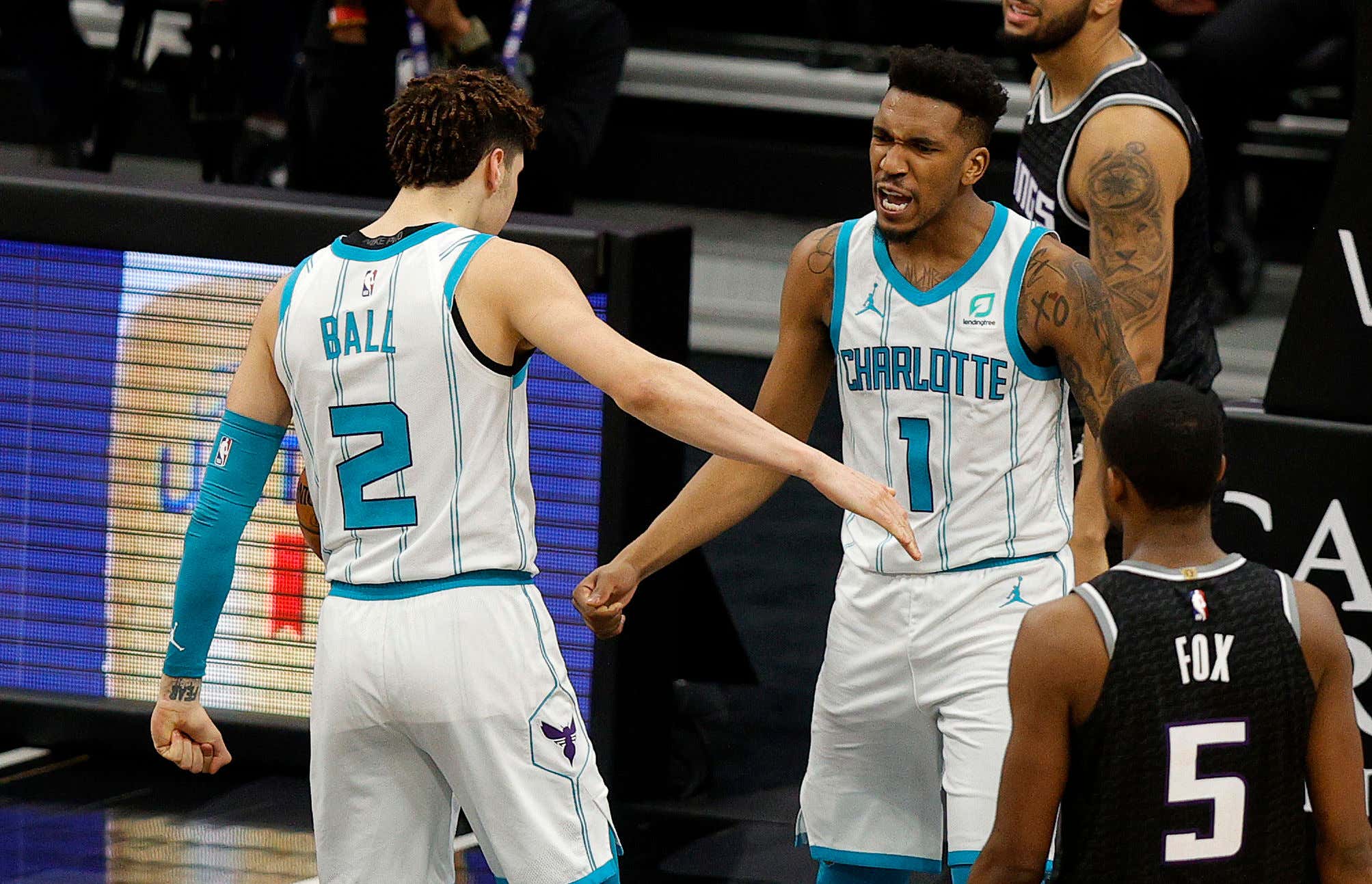 OK, so things got a little weird late night last night on the West Coast. It's example #3459874 why you should never go to sleep while there are basketball games going on. The ending of Hornets/Kings was one of the more improbable comebacks you'll ever see. These poor Kings fans, they've now had to watch their team drop 10 of their last 11 and now sit at 13-21. Haven't they suffered enough? What did they ever do to deserve this consistent and never ending pain?

Allow me to help paint the picture for you in the event that you missed it.

Heading into the fourth quarter the Kings held a 96-88 lead. Nothing crazy, but they were in a good position to close this out at home. Well….then the Hornets went a little nuts. I'm talking 39 points on 63/50% splits in the quarter. All of a sudden we had a dogfight on our hands down the stretch. PJ Washington was a monster not only in that fourth quarter (12 points) but really the entire night

Same thing with LaMelo and his huge 24/12

But it wasn't until late in the fourth when things started getting really weird. The Kings had two separate 8 point leads down the stretch of this game. Two. The first came at the 3:53 mark after a Harrison Barnes And1. At the 1:09 mark the score was 123-115 with the Kings heading to the line. Basically, ending the game right?

De'Aaron Fox missed both his FTs.

Then came this Terry Rozier three

No need to panic, the Hornets fouled and the Kings went back to the line up 5 with 44.8 seconds left.

Marvin Bagley missed both his FTs

After Rozier is fouled taking a three,  we had a two point game at 123-121 with 33.7 seconds left. Timeout Kings. OK, surely they would find a way to stop the bleeding and close this game out. They did just that with a De'AAron floater. Up 4, under 24 seconds left. Almost impossible to lose now right?

Out of a timeout, PJ Washington hits a three. One point game. Timeout Kings with 17 seconds left. Good news is the Hornets are going to have to foul.

Buddy Hield goes one of two at the line.

And well, on the very next possession we had this from Malik Monk

Game over. Heartbreak city. Just think of what we witnessed over that last 3:53 of game time. The Hornets come back from down 8 twice, and in order to do that the Kings had to miss 6 FTs down the stretch of this game. That's nearly unheard of. This is why I told you that you should be watching the Hornets on League Pass. They are so much fun to watch.

This collapse didn't hurt just Kings fans. It also was one of the worst beats you'll see for anyone who had money on the Kings. That's a game you 100% assume the Kings win. That slow painful deal and ultimate collapse is a brutal feeling to experience. Trust me, I know. It just goes to show you how important FTs are. Let that be a lesson to all you young stoolies out there. Can't be missing fourth quarter FTs like that.

Meanwhile, the Hornets remain in the playoff hunt and are playing a very fun brand of basketball. Sometimes you need a little luck along the way.