[Source] - Post Malone has released a cover of Hootie and the Blowfish’s 1995 hit song “Only Wanna Be With You” ahead of his performance at the Pokémon Day 25th-anniversary virtual concert on Saturday, February 27th.

Officially dubbed the “Pokémon 25 Version” of the song, Post Malone’s rendition trades the rootsy production of the original track for lush, echoing guitar and plenty of synthesizer sound effects that are reminiscent of the original Pokémon video game.

Excuse me but what the fuck is this? There are a few songs that just don't need a cover and Hootie and the Blowfish's 'Only Wanna Be With You' is one of them. It's a great song, damn near perfect. Sure, some could say this is what we get because Darius Rucker released a new version of Wagon Wheel, but this is a travesty. What does Hootie even have to do with Pokemon? Why is this the Pokemon 25 Version? I got plenty of questions there alone.

Again, you tell me why we needed to hear a new version of this?

I'm a huge Hootie fan, always have been, always will. Gotta ask this question though. Is there a better job than being the other members of Hootie and the Blowfish? They are like Matt Flynn or any longterm backup quarterback. Everyone knows Darius Rucker and they just hang out in the background and make a shit ton of money. Seems like a decent gig even if nobody knows your name and just labels you 'the blowfish.'

You could make the argument that Cracked Rear View is the best album of the 90s. Is it completely opinion-based? Absolutely. But that's what arguing is all about. 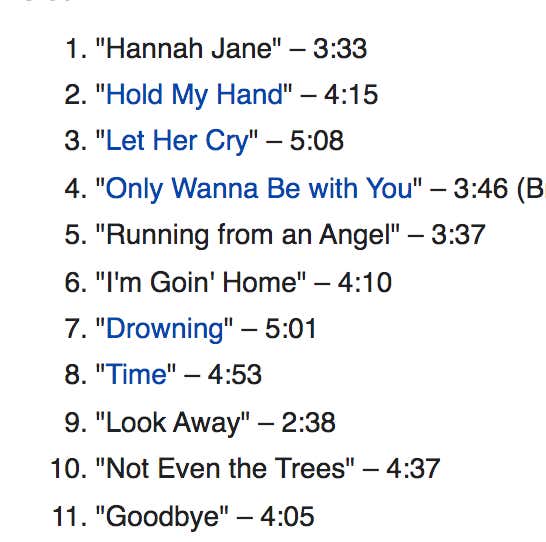 Look at that list! 2-5 is up there for the strongest 4-song stretch on any album. This isn't even anything against Post Malone, I have no qualms with Mr. Malone. This is about Hootie and backing that sometimes we don't need songs remade. I still have no idea what this has to with Pokemon but I don't care for it one bit.

I get the move by Post Malone though. Everyone LOVES the 90s, it was by far the best decade. I still long for the days of TGIF, TNBC, dial-up Internet and playing Ghost in the Graveyard. Shit was awesome. We had the best music, the best TV shows and the best of both worlds pre/post Internet. There's a reason why everyone is trying to recreate the 90s. We have a new Saved by the Bell, we saw American Gladiators, we're getting show reunions and now this. Now we have Post Malone remaking Hootie and the Blowfish. I hate it. Some music just needs to stay as is.

Now for even more arguing - my top-10 Hootie songs

PS: This has already been covered and you're not topping this Post Malone: