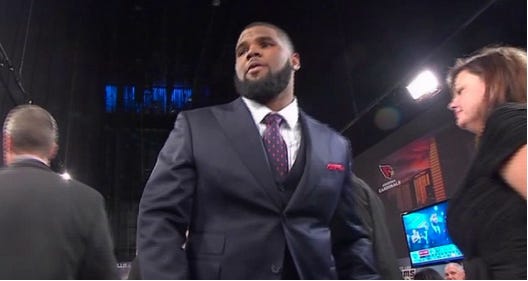 ST. CHARLES COUNTY, MO (KTVI) – A former standout on the Mizzou football team and NFL first-round draft pick is facing charges of resisting arrest and other traffic violations for allegedly street racing on Interstate 64. Less than two weeks after being suspended by the NFL after testing positive for marijuana, New York Jets defensive tackle Sheldon Richardson was arrested in St. Charles County on July 14. The St. Charles County Prosecuting Attorney’s Office said officers with the O’Fallon Police Department noticed two vehicles in what appeared to be a road race on westbound I-64. The vehicles were clocked on radar three times at speeds of 122, 135, and 143 miles per hour. Police attempted to conduct a traffic stop, at which time the driver of a 2014 Bentley Silver Spur increased continued speeding to avoid citation. The driver got off the interstate, sped through a red traffic signal, and turned off its vehicle lights. The driver then turned into the driveway of a home in a nearby neighborhood to avoid detection, but police noticed the brake lights and pulled in behind the car. Officers identified Richardson, an O’Fallon native, as the driver. Two other men and a 12-year-old child were also in the car. A fully loaded handgun was found beneath the driver’s seat. Everyone in the car also smelled of marijuana. The passengers were not charged with any crimes. Richardson, the 2013 Defensive Rookie of the Year, was selected sixth overall by the Jets in the NFL Draft. He will have to appear in St. Charles County Circuit Court in late October for his arraignment.

I always got the feeling that Sheldon Richardson was kind of an idiot. But so far in his career it came off as just brash cockiness. Swagger. He backed it up with his play so his comments were always spun like “Yea! We need this kind of fire! Hes arrogant! Hes confident! Hes Boss Hogg!” But in the back of your head you were kind of always thinking…is this guy gonna be a fucking idiot? Is he gonna be a problem?

And now after 2 VERY quick strikes, things are becoming a problem. There is real reason to be concerned. Strike one was brain dead. Literally retarded. You almost have to try to fail a drug test for smoking weed in the NFL. Every player knows EXACTLY how to avoid getting caught and he still fucked it up. This second strike is fucking NUTS. Drag racing at 143 MPH, trying to evade cops, kids and guns in the car with everyone smoking weed? Thats a big fucking deal. Thats stupid, stupid, reckless behavior. And while the end result wasnt anything tragic or too illegal (Who knows what the gun/drug charges may or may not be) its dumb enough behavior that you now have to officially be worried about what Sheldon Richardson is capable of. I mean anyone who does all the dumb shit he did July 14th in this car is capable of absolutely ANYTHING. Nothing would shock me now if I hear that he breaks the law or breaks more league rules. He’s officially a young, dumb rookie that needs to be worried about. As long as he gets back on the field Week 5 and plays like hes capable of, I dont really care. But the Jets have had their fair share of locker room/off the field issues and it just SUCKS that the youngest, most promising piece of the D Line is a fucking moron problem child