NY TIMES — Ask Lucia DeClerck how she has lived to be 105, and she is quick with an answer.

But surviving the coronavirus, she said, also may have had something to do with another staple: the nine gin-soaked golden raisins she has eaten each morning for most of her life.

“Fill a jar,” she explained. “Nine raisins a day after it sits for nine days.”

Her children and grandchildren recall the ritual as just one of Ms. DeClerck’s endearing lifelong habits, like drinking aloe juice straight from the container and brushing her teeth with baking soda. (That worked, too: She did not have a cavity until she was 99, relatives said.)

“We would just think, ‘Grandma, what are you doing? You’re crazy,’” said her 53-year-old granddaughter, Shawn Laws O’Neil, of Los Angeles. “Now the laugh is on us. She has beaten everything that’s come her way.”2

"9 raisins a day. Fill a jar." God I fucking love old people. Just so badass.  And old, and senile, and drains on their families and society as a whole...those things too, but much more importantly: badass. Never for a moment are they short on that old-school, inspiring "I haven't given a fuck what anyone has thought or said about me in 50 years" energy.  We could learn a lot about confidence and self-love from old people . Do you think for even one second Lucia thought she was saying something out-of-the-ordinary here? That anyone would even for one second think something was not completely normal about drinking gin raisins during prayer while wearing sunglasses indoors?

Hell no! This is always the story. Every single time. Every "oldest person in the world" interview, every "borderline dead corpse somehow survived a disaster" segment. Never will you see a triatholon-running #fitspo 120 year-old on the news with the secrets to living a long life. It's ALWAYS someone like Lucia, always someone with a cig permanently perched on their lip and a glass of cheap plastic-bottle scotch, who survived the past 80-or-so years on nothing but Pall Mall ashes and gefilte fish. who was not just born, but employed and like aggressively conributing to a 401K during the wars. The fucking WORLD ones.

All of them, to a person, giving some interview for a fluffy feel-good human-interest piece with the local Gazette about their secret toxic-waste-dump-diet Fountain of Youth.

She did this from a nursing home too. A New York City nursing home. Not even Cuomo could stop the swag, and he's been shooting lights out in that department.  That's what happens when you believe in yourself -- although let's not underestimate the value of live game experience, considering Lucia literally lived through the last one of these.

To her two surviving sons, five grandchildren, 12 great-grandchildren and 11 great-great grandchildren, who call her Grandma Lucia, she has a new moniker, Ms. O’Neil said: “The 105-year-old badass who kicked Covid.”

It is a long list. Born in 1916 in Hawaii to parents who came from Guatemala and Spain, she lived through the Spanish flu, two world wars and the deaths of three husbands and a son.

“She is just the epitome of perseverance,” Ms. O’Neil said. “Her mind is so sharp. She will remember things when I was a kid that I don’t even remember.”

Now put your little mask on and let Grandma Lu laugh at you. 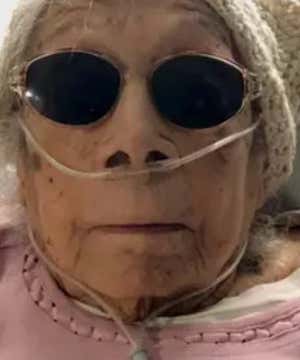