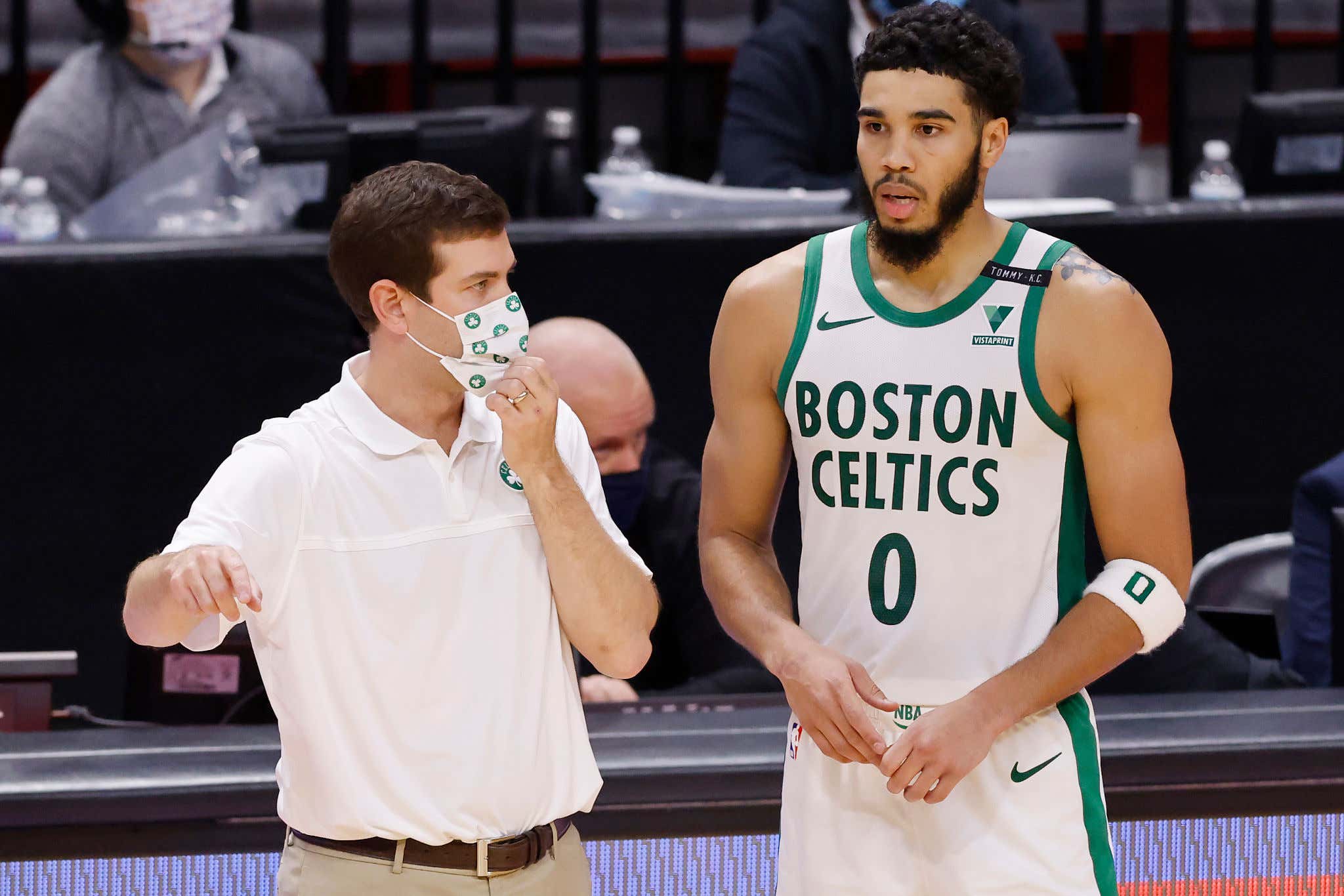 Earlier today I talked about how we are currently watching one of the worst fourth quarter teams in the entire league when it comes to the Celts. Anyone who has watched them this year will agree. But then I started to wonder why that might be?

The truth is, it's a complicated issue that has many responsible parties. That includes in part talking about the reality that many might not want to believe. There's a reason this team is shooting 41/31% in the fourth quarter compared to their 47.6% shooting in the three previous quarters (953-2002). It's part roster building, part coaching, part player execution. Allow me to explain.

The one thing we can't really do is imagine what the rotations/plan might be when this roster is fully healthy because that's a pipedream. The reality is guys have missed huge chunks all year. Kemba is on load management, Tatum had covid, and now Smart is out for another three weeks after already missing basically this entire month.

In a shocking twist, the bench production in the fourth quarter this season actually hasn't been that bad production wise. They average around 6 minutes, score 10 points on 44/35% splits. Not great, but certainly not a problem. But that also doesn't really tell the truth of the situation either. What we're seeing is in these closing moments of games, the roster does not have enough willing shooters that surround the Jays. If you look at the 4th quarter Ortg of their main bench pieces

combined with the fact that Pritchard leads the bench with only 2.1 FGA a game and you start to understand where the struggles come from. The Celtics are easy to defend in these fourth quarters because they struggle to find a lineup combination with consisting shooting threats.

Then we move to the starters. Together, the Jays take around 10 FGA in the fourth. Kemba is next at 3.9, then Smart at 2.5. With Kemba shooting 27.5/26.9% and Smart a stellar 28.9/6%, even when this team plays most of their starters in the fourth, they continue to lack that additional consistent scoring threat. Yesterday was a great example of this. In that collapse, the starters played the majority of the fourth and everyone struggled to score, they were easy to defend. Especially when teams know that only Tatum and Jaylen are worth guarding. That's where you see Ainge's role in all this.

In fourth quarters this season, we see Jayson average just 1.0 assists and Jaylen 0.5. Their playmaking is invisible because guys aren't threats to score. That means they need to take on an additional scoring burden as defenses tighten up. One of the biggest reasons we're seeing this team struggle late in games is because their offensive approach is all fucked up. We see the two best players on this team have to rely on inconsistent jumpers that have a high degree of difficulty.

For example, on the season, the Jays are taking pretty much the same above the break threes in the fourth as they are shots in the restricted area.

They are both averaging under 2.0 FTA a night in the fourth quarter. More often than not we see both Jays have to force constested shots instead. How frequently? Well, 47% of all Tatum's fourth quarter FGA are considered coming against "tight" coverage. With Jaylen it's 48.7%. That's wild considering they are taking most of your fourth quarter shots. Here's a prime example from just yesterday.

Those are both shots we know Tatum can make, but it's more about the situation for me. With things falling apart, he's making things tougher on himself when he didn't have to. Especially on a night where he was struggling shooting. With Jaylen, he does get a little homerun three happy in the fourth quarter. Maybe that has to do with the fact that he's shooting just 25% on wide open 2pt FGA in the fourth. That's brutal.

Next, we have to shift our focus to someone like Kemba. The whole key of this lineup working is if Kemba can be a consistent third scoring threat. He needs to be the guy that takes the pressure off the Jays in terms of defenses actually having to account for him on the offensive end. That is not happening this year. It's not just his outside shooting either. He's shooting just 18% on contested 2 point FGA in the fourth quarter. He also has the highest frequency of wide open 2pt FGA in the fourth (5.9%) but shoots just 33%.

But where Kemba has really hurt this fourth quarter offense is his open three point shooting. He gets the same amount of frequent clean looks as someone like Jaylen (19.5%), but he's shooting 10% on those threes (Jaylen is 40% by comparison). When you take a step back, you see that Kemba can't score on contested twos, and also can't score on open twos and threes, this also puts more pressure on the Jays to force things offensively. That's not a Brad issue, that's a player execution issue.

So what do we take away from this? The lack of options offensively force Jaylen and Jayson to have to take more contested low percentage looks in the fourth. That's both player related and Ainge related. But it's also on those two to recognize things are slipping away and find ways to take more efficient looks.

A lot of people only talk about Brad when it comes to the fourth quarter, and while that's a little much, there is no denying he has his share of the blame pie.

On the season, the Celts run isolation 8.2% of their possessions, which is the 5th most in the NBA. They rank in the 17th percentile. Of teams that run a lot of iso, it's shocking how bad they are by comparison

So when you see this team fall into isolation bad habits in big stretches during fourth quarters, that's on Brad. He needs to recognize that shit is happening and stop it. Even if he does that sometimes, he needs to do it more. Unfortunately NBA.com doesn't let you filter this by quarter, but we all know it seems to go up at the end of games.

On the season, the Celts are shooting 32% on FGA from 16 or more feet in the fourth quarter 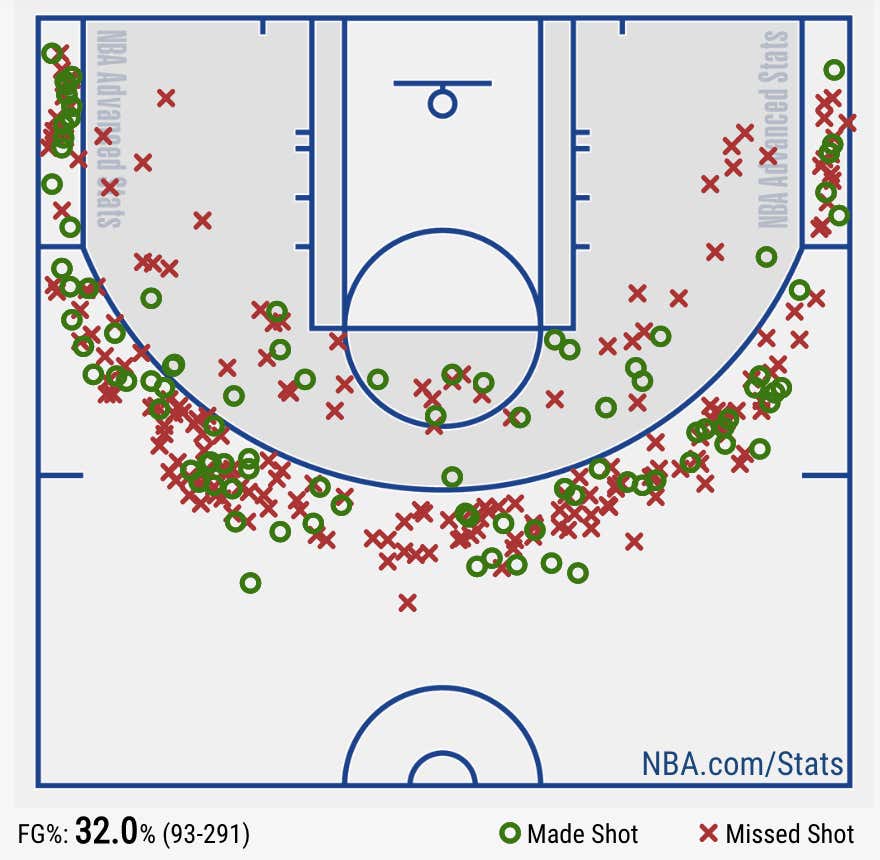 I don't think it's a stretch to assume that a majority of these looks come as a result of possessions with low ball movement. That percentage jumps to 38.9% in the previous three quarters for reference.

You could also mention Brad's fourth quarter rotations which he's been fucking up for some time now, but there's also something that I think is due to coaching that people aren't really talking about when it comes to the struggles in the fourth. The Celts aren't getting into their sets quick enough. We see them walk the ball up, and since there is a lot of isolation issues, guys are holding the ball and not moving. What that does is it forces the Celts (the Jays) to take low percentage end of clock jumpers.

The Celts average 21 FGA a fourth quarter. About a quarter of those FGA come with 7 or under on the shot clock. The pace the Celts play with in the fourth (98.67) also is a dip compared to what they average on the year. Think of the quarters we are seeing this team struggle (3rd and 4th really), it's no surprise those are the two slowest paced quarters the Celtics have.

That's something I consider Brad responsible for. Pushing the pace, getting into things earlier in the shot clock, run things other an iso so your best players aren't forced to take low percentage shots. That's how you get collapse after collapse.

So how the fuck do you fix it? Well, you hope that water finds its level when it comes to Kemba's fourth quarter struggles. Even if he's slightly below average, that's a billion times better than what the team is currently getting. But Ainge also needs to find players that can actually be a scoring threat to help the Jays and make defenses stay honest. The Jays need to be better at not settling and starting fourth quarters taking low percentage contested looks. Instead find ways to be aggressive. Brad needs to be better at making sure his roster plays with a better pace, gets into things quicker, and actually runs an offense.

It's not like some of the things we see (isolation, Tatum fadeaways, Jaylen threes) are bad. They are things we can see them do successfully, But the important part is doing them in moderation. It's clear the current strategy has not worked, so now it's time for everyone to accept the fact it's a combined effort and find ways to adjust. If they don't they'll continue to be inconsistent and drop games due to fourth quarter collapses that they have no business dropping.