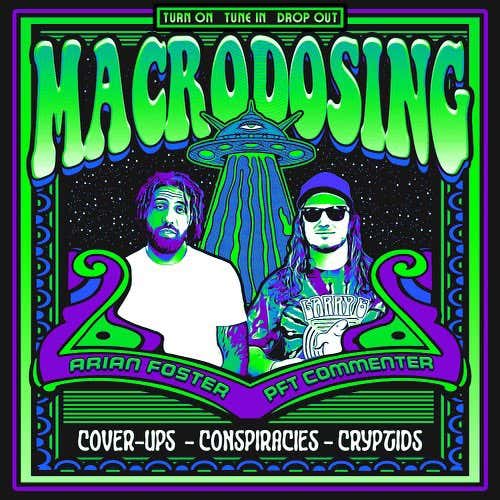 So this is pretty crazy- me and Arian Foster are launching a podcast about Conspiracies and cover-ups. Think of it as the deep web but in audio format. We've been texting/DMing for a couple years and discussed teaming up to collaborate on some thing together, and now with SIRIUS radio ending Ive got a little extra time to take on a new project, so what better person to do it with than Arian? The shows called Macrodosing and its gona get real weird.

It will comes out every Tuesday, and will feature myself, Arian, Big T as the voice of Alex Jones, Billy Football as our "Jamie" (no joke Billy heard about the show last night and asked if "he could be our Jamie"), and the one and only Coley Mick with Avery producing as well as anyone else who wants to contribute. Gona be a open door policy. Its also a collaboration with Three Four Two productions and Im excited to be working with them.

The first episode comes out tomorrow and it will be a look into the life  of Alex Jones- a absolutely crazy individual who went from Local Access Television to household name. I've been listening to Alex off and on since like 2006 when somehow he looked older than he is right now, even though right now he looks 15 years older then he currently is. Ive seen the man change a lot over the years and its interesting to learn more about the rise of one of America's loudest, raspiest, craziest, reddist, voices.

PS The logo is fire. Im not a drug guy, but this image is convincing me to maybe become one