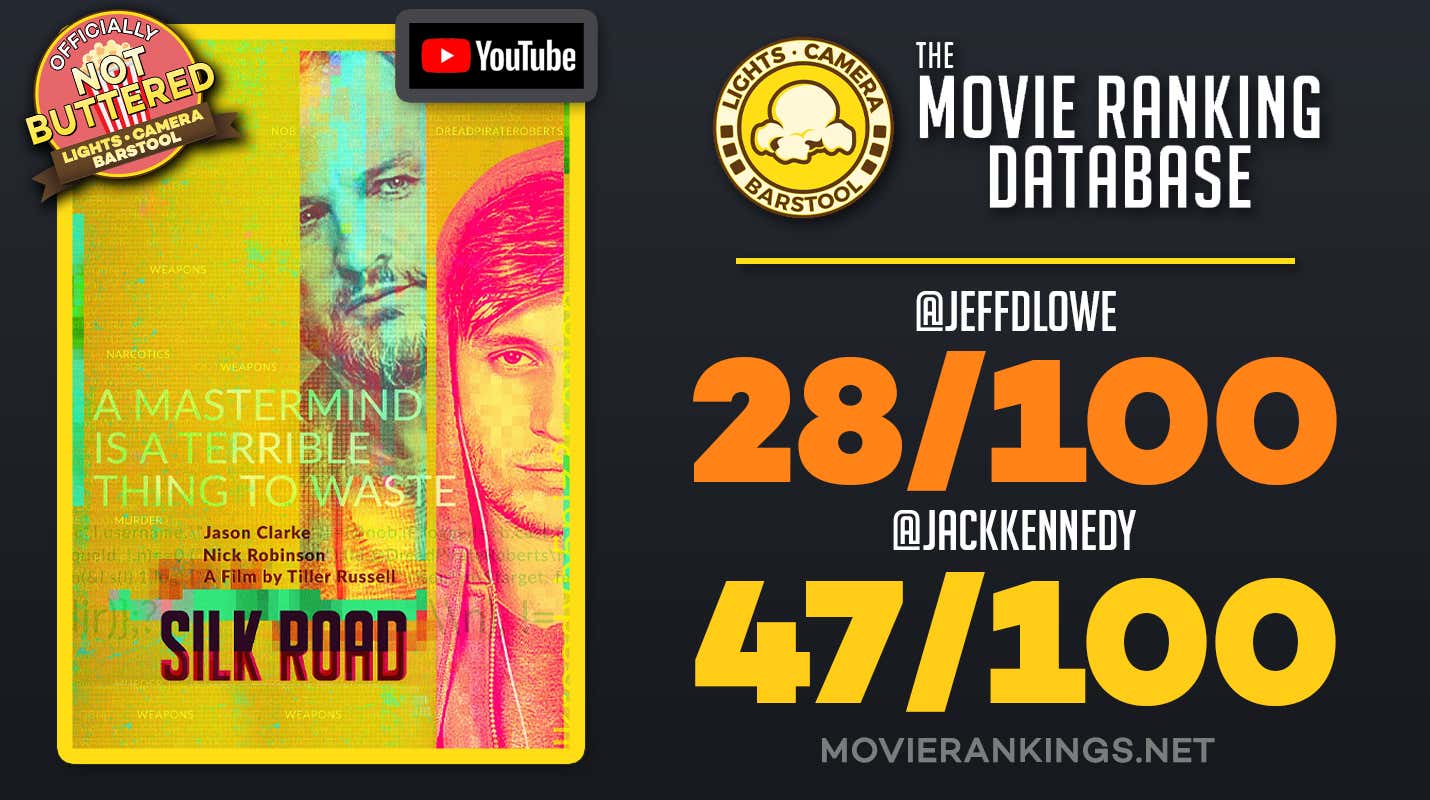 This movie was just released and…

Young, idealistic and driven to succeed, Ross Ulbricht creates Silk Road, the internet's first unregulated marketplace. When the site becomes a multimillion dollar pipeline for illicit drugs, Ulbricht draws the attention of Rick Bowden, a dangerously unpredictable DEA agent who uses any means necessary to take him down. (via Google)

JeffDLowe (28/100): 'Silk Road' wants so bad to be hip and relevant, but instead delivers nothing more than a cringeworthy movie that does no justice to its incredibly intriguing story. The movie, based on a true story, struggles to push through its abysmal screenplay and borders on a ton of unintentional humor.

We're going to try more bullet point breakdowns, as it cuts down on my ramblings:
- This is the most "how do you do fellow kids?" movie released in a while
-- It just screams of a movie written by older people trying to sound young
-- There might be somewhere between 15-20 moments of dialogue that made me laugh
-- …and given the subject matter, I'd imagine that wasn't the intent
- Somehow takes a very complex, interesting story, and makes it very boring
-- The only thing that really saves the movie is that it moves with nice pacing
-- Had this movie hung up more on certain moments, and scenes, it might've been a 00/100
- Almost every performance in the movie, especially from Jason Clarke, is over-acted
-- Jimmi Simpson and Paul Walter Hauser give solid performances, I will say that
- The movie is edited with these weird freeze-frame crossfades from scene-to-scene
-- It's fascinatingly distracting, to a point where I loved how bad they were every time
- It's a lifeless dud that really relies on its interesting premise for it to be remotely competent
-- Even then, it was a few things away from truly being one of the worst movies I've ever seen

There is nothing worse when it comes to watching a movie than seeing the visible effort made to "fit in" with its time period or for an intended audience. Everything about 'Silk Road' feels unnatural and forced, and it's a truly terrible effort at putting a movie-worthy story on the big screen.

KenJac (47/100): Every now and then, you come across a movie that is so hilariously bad, that it’s actually good. To me, that is ‘Silk Road’. It takes what should be, at the very least, an engaging and interesting storyline and pummels it to death with a horrible script, bad acting, and one of the worst attempts at the period setting I’ve ever seen. Let's break it down…

From an acting standpoint, there is not a single positive thing to take away from Silk Road. Actually, I take that back. The actress who played Tony Stark’s “I love you 3000” daughter showed up for about 3 seconds and made me do the Leo pointing meme. Anyway, Aussie Jason Clarke, who I usually like in most movies, had a really weird role. His DEA agent character was supposed to be naive when it came to white-collar crime, but he was literally just a moron who apparently had never even heard of the internet despite it being 2012. This was to the point where there is literally a scene where he reads an “Internet For Dummies” book. He has this weird, fake bad-ass persona that just never lands at all, which frustrates me as a fan of his work.

Nick Robinson, another actor I generally like, was also completely inert. So was Alexandra Shipp, who I only imagine was given one take for every scene she was in. Two actors I really like, stoolie Paul Walter Hauser and Jimmi Simpson, were fine in small roles, but not given a ton to work with.

The main issue with this movie is that it is just plain fucking boring. The guy made an international drug trafficking ring that eluded cops for years, how do you fuck that up? There is no tension, no intrigue, and it’s also just poorly edited. One of the weird things about the way this was made was also just the lack of setting. This is all supposed to be taking place around 2013ish. Robinson is running around with an iPhone 2, PWH is listening to Chocolate Rain on repeat, Darrell Britt-Gibson throws out the line “It’s a cryptocurrency, Yo!” It’s just bizarre.

This movie is bad, but I will admit it inadvertently entertained me to a very high degree.

--
The movie is Officially Not Buttered and a big pile of shit. You can head to Lights Camera Barstool right here to listen to our latest episode where we just reviewed 'Barb and Star Go to Vista Del Mar' and Drafted the Best & Worst States of the United States.