I'm going to make this as quick as possible. I was perusing around Fangraphs and Baseball Savant this morning, like I do 2-3x a week because I love to nerd out in that shit, when I decided to look up why all of these (admittedly meaningless) preseason ranks have the Yankees so high.  Everyone and their mother has them as a top 5 team in baseball.

Now, I don't necessarily disagree with that. I think they're probably the best team in their division. I don't think they're a juggernaut by any means, but top 5-7 sounds about right. Loaded lineup with a really good pen. That can change with the Jays coming on strong this winter and the Rays being the same old weird ass Rays, but in my brain they're the team to beat in the AL East at this moment.

That's why I decided to do a little deep dive into their rotation and sent out this harmless tweet and Yankees fans are ready to slit my throat (again) because of it:

I realize I sort of contradicted myself by saying their a top 5-7ish team to start the blog and then said I don't get the love the media has for them in the tweet, but both can be true. I would NOT be shocked if they finished 3rd in the division. They'll probably win it, but it wouldn't be some apocalyptic event if they finished behind the Jays and Rays either. Ya know why?

They also have Luis Severino and that women beater German Domingo German as depth. The former is only starting to throw at 120 feet for rehab and won't be ready to start for months, the latter is still in trouble for (allegedly) beating the shit out of his GF. Those two are question marks, at this point in time.

That's not me being a Yankee hater. That's me speaking truthfully. Let's break it down 1 by 1, excluding Cole who we all know is a freak of nature.

Not good! Oh and he's a month and a half away from turning 35 years old. Pitchers don't just magically hit that age and revert back to their prime, especially when you were throwing 200+ innings for 5 straight seasons and coming off a shoulder tear. His fastball also checked in at about 91MPH last year in his limited sample, down from 94MPH a few years prior, courtesy of Baseball Savant.

Excuse my ignorance but that's not someone I'd want as my #2 entering the season. Perhaps I really am just biased and hate the Yankees because of that (formerly) snaggletoothed fuck Marty Mush, but I don't think I am. Kluber, in my opinion, is cooked. I don't think they will be able to count on him for more than 20 starts this year, and in the starts he does make, I don't think he'll be all that great.

Then we get to Jameson Taillon:

I don't mean to be curt or blunt, but to me, that's a question mark. Now, Taillon is only entering his age 30 season and should have have some theoretical juice left in his tank but…. he's had Tommy John surgery. Not once, but twice. What pitchers get better after they turn 30 and have TJ surgeries under their belts? Ummmm off the top of my head I can think of exactly nobody. There might be an outlier or two out there that did accomplish this feat, but they'd be the exceptions to the rule.

All things considered, Jameson Taillon is a question mark.

Now let's talk about Jordan Montgomery. I like Montgomery. Dude has a great changeup and as a changeup enthusiast, I love to watch him pitch when he's on.

But he hasn't been on all too often. In fact, he's only tallied a bad ~55IP since his solid rookie campaign in 2017:

I don't know if I'm taking crazy pills or not, but to me, that is a huge question mark. If you're keeping score at home, at this point of the blog, the Yankees are counting on 3 dudes who have compiled 121 innings pitched in the last two years COMBINED. For all three of them. Though I do still think Montgomery can be a productive middle of the rotation arm in the big leagues, he is, at this moment, a big question mark.

And the rotation is rounded out by Deivi Garcia. The same Deivi Garcia who was decent enough in his rookie campaign in 2020, but only has 6 starts and 35 or so big league IP under his belt at this moment:

and though he was… fine… at eating some innings last year, his pure "shit" leaves a LOT to be desired. I don't mean to be the bearer of bad news, but here is his Statcast profile: 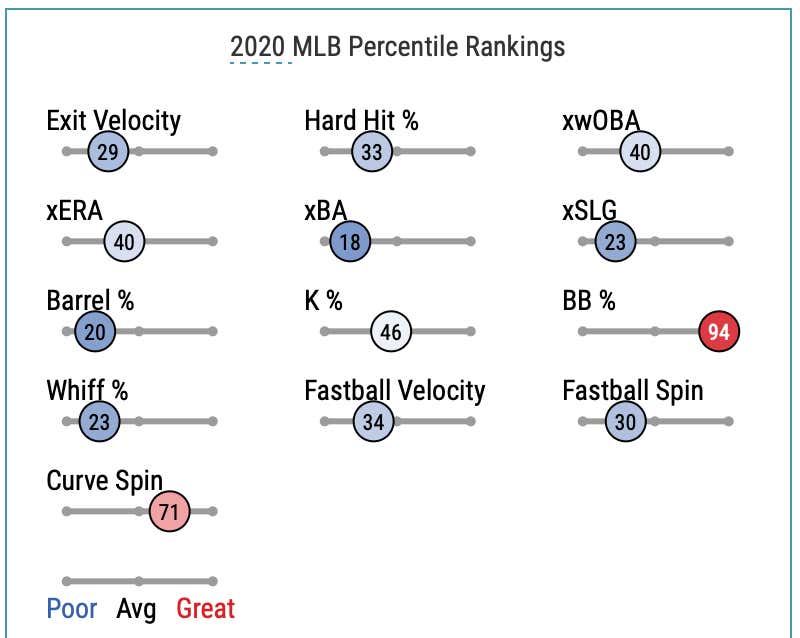 That's… not pretty. Sure, some pitchers outperform their lack of pure "shit" and are fine cogs in rotations anyways, but that doesn't mean they're not a gamble…. or a risk… or a goddamn QUESTION MARK.

Now the Yankees can absolutely trade for help at any point of the season this year and I'd expect them to. Could even be for another ace that complements Cole perfectly to form a formidable 1-2 punch that nobody wants to see come October. But at the very moment, the yankees rotation doesn't scare me, a fan who thinks the two orgs might meet in the playoffs, or any players on contending teams in the American League. Opposing lineups will be licking their CHOPS to bat against Kluber, Taillon, Montgomery and Garcia. That's just a fact right now. The Yankees rotation is littered with question marks top to bottom after Cole.

Or maybe it's all just me. I don't know what the fuck I'm talking about. I'm just a lowly White Sox fan who isn't allowed to talk about the almighty Yankees because I root for such a loser organization. I should have never opened my mouth.

PS - Derek Jeter can blow me