Comicbook.com- It looks like the longest episode of WandaVision yet will be on your television sets before too long. This coming week, it looks increasingly likely WandaVision Episode 8 will carry a runtime of 47 minutes. The latest reports come from the same WandaVision leaker who revealed that last week's episode was going to be 37 minutes long, a tidbit that proved accurate. 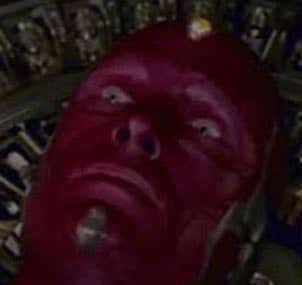 I know that believing a runtime report from some rando on Reddit seems as nerdy as it is crazy but the half hour or so I watch WandaVision is the closest thing I have to happiness these days and everyone on Reddit has been pretty much spot on with all their WandaVision theories so far, including calling out Agnes on her bullshit long before that bitch admitted to being a witch named Agatha that was behind everything all along.

Me every time I hear that song:

So of course I am going to assume that we are getting the longest Wandavision of the season if this guy is already 1-0 on runtime predictions and will celebrate that the evilest villain in the MCU (the Please Stand By screen) will be out of sight for a glorious extra 10 minutes or so this week. Not only that, but I think it's a fair guess that there are probably going to be no more sitcom scenes but instead just straight Marvel action uncut to as we get some Agatha backstory, maybe an introduction to that dick Mephisto, HOPEFULLY an introduction to a certain aerospace engineer, and almost definitely a battle between a bunch of people with different colored glowing eyes followed by another mid-credits scene that will cause a couple of brain cells to explode.

For much more about what just happened in WandaVision and what lies ahead as all those seeds that have been planted blossom into beautiful flowers before our eyes, check out today's My Mom's Basement.

Podcaster's Note: I didn't believe that the picture of the Quicksilver Funko Pop with the name "Pietro Maximoff" in heavyyyyy quotation marks was real because I couldn't find a link to buy it, which seemed extremely unDisney. However, I was told by my Twitter pal Vinny that Funko themselves said it was coming out, which puts Pietro (if that is his real name) onto a whole other tier of Susness

God I love the attention to the littlest details of everything related to this show, no matter if they pan out or not.